Chlorophyll is located in the photosystems on the thylakoid membrane and is a mix of coloured proteins that can absorb light. There are 5 key closely related pigments, but chlorophyll a is the most abundant.

Below are the 5 pigments and the colour they appear: 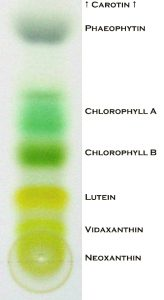 There are different proportions of each pigment in leaves, which gives leaves slightly different colours.

As each pigment absorbs a different wavelength of visible light, this maximises the spectrum of visible light that the plant can absorb, and therefore increases the amount of light energy absorbed. 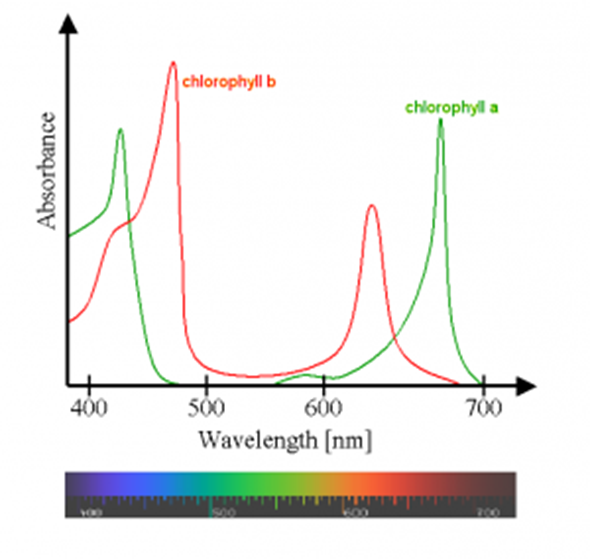 The pigments in chlorophyll can be isolated using chromatography.

NADPH which can then be used in the light-independent stage.

This is occurs in three key stages:

The electrons that gained energy and left the chlorophyll move along a series of proteins embedded within the thylakoid membrane. As they move along they release energy and some of the energy from electrons is used to pump the protons from photolysis across chloroplast membranes. The protons pass through the enzyme ATP synthase, which results in the production of ATP. The protons combine with the co-enzyme NADP __to become __NADPH. Because the protons move from a high to low concentration gradient this is known as chemiosmosis. 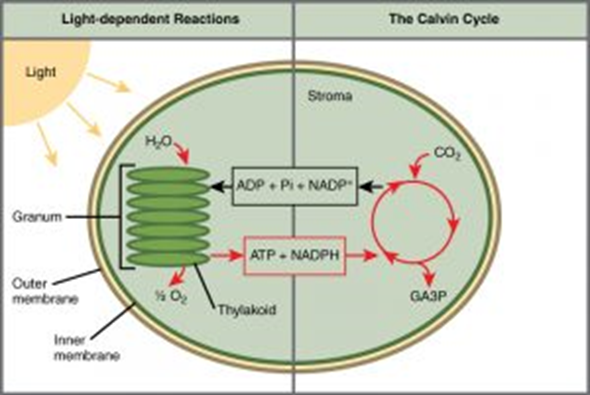 The light-independent reaction is a cycle, the Calvin cycle. It uses carbon dioxide, reduced NADP and ATP to form a hexose sugar. The ATP is hydrolysed to provide energy for this reaction and the NADPH donates the hydrogen to reduce molecules GP in the cycle.

The Calvin cycle occurs in the stroma, and this fluid contains the enzyme RuBisco which catalyses this reaction. This stage is temperature sensitive due to the fact it involves and enzyme. 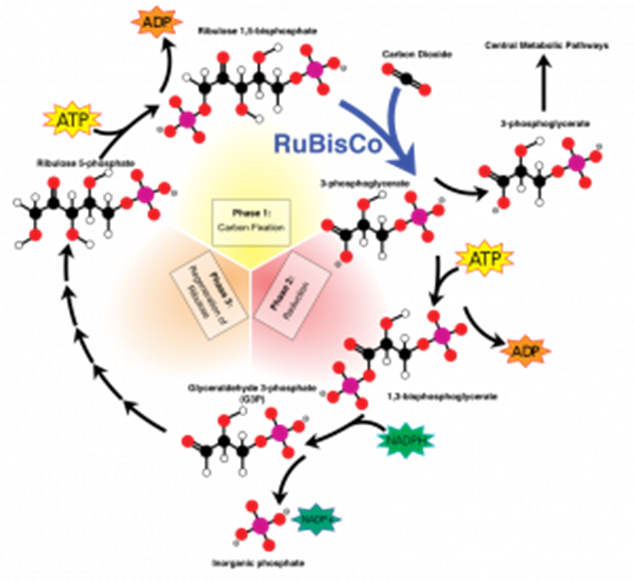 The cycle shows that the carbon dioxide reacts with ribulose bisphosphate (RuBP) to form two molecules of glycerate 3-phosphate (GP), a 3 carbon compound. This reaction is catalysed by the enzyme rubisco. To reduce this GP into triose phosphate (TP,) ATP and NADPH from the light-dependent reaction are used. Some of the carbon from TP leaves the cycle each turn to be converted into useful organic substances. The rest of the molecule is used to regenerate RuBP, with the energy from ATP.

Whilst glucose is the product, this monosaccharide can join to form disaccharides such as sucrose, and polysaccharides such as cellulose and starch. It can also be converted into glycerol and therefore combine with fatty acids to make lipids for the plant.

Calvin’s experiment examined the products in the LIR using radioactive carbon. Carbon dioxide that is radioactively labelled is inserted, this allows the carbon molecules to be labelled and traced. He would then measure the amount of radioactive GP and RuBP under different conditions, mainly in the light and dark, as a way to prove which factors impact the LIR.

Any factor that reduces that rate of photosynthesis is called a limiting factor. These could be temperature, carbon dioxide concentration or light intensity. For maximum photosynthesis, and therefore plant growth, common agriculture practices incorporate techniques to remove limiting factors. These range from growing plants under artificial lighting to maximum the light intensity, heating a greenhouse to increase the temperature and burning fuel, such as paraffin burners, to release more carbon dioxide. The extent that each technique is used needs to be consider in terms of profit. If the extra growth from photosynthesis is minimal, it will not be cost effective to pay for heating/lighting/fuel. 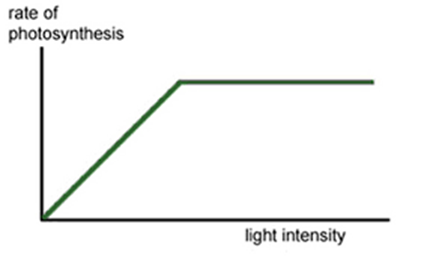 Respiration is the reaction that produces the ATP needed for other metabolic reactions in cells. It is an enzyme-controlled reaction and is therefore sensitive to temperature and pH changes.

Glucose is broken down to release the ATP, but if there is no glucose, glycogen (in animals) or starch (in plants) stores of glucose left then other respiratory substrates are used. Lipids can be hydrolysed to glycerol and fatty acids. The glycerol is then phosphorylated into triose phosphate and enters aerobic respiration at the Krebs cycle. Proteins could also be modified and used. Amino acids must be hydrolysed and the amino group removed (deamination). The carbon compound that remains can enter the Krebs cycle.

Is this stage all the accumulated reduced coenzymes release the hydrogens and these split into protons (H+) and electrons (e-). The e- are passed down a series of electron carrier proteins embedded in the inner mitochondrial membrane, losing energy as the move (electron transport chain). The small amount of energy the electrons release pumps protons from the mitochondrial matrix into the intermembrane space. This creates an electrochemical gradient across the membrane. Therefore, the protons move down the electrochemical gradient back into the matrix via ATP synthase making ATP. This movement of H+ is known as Chemiosmosis. Oxygen is the final electron acceptor in the electron transport chain. The oxygen combines with the electrons and the protons to form water. 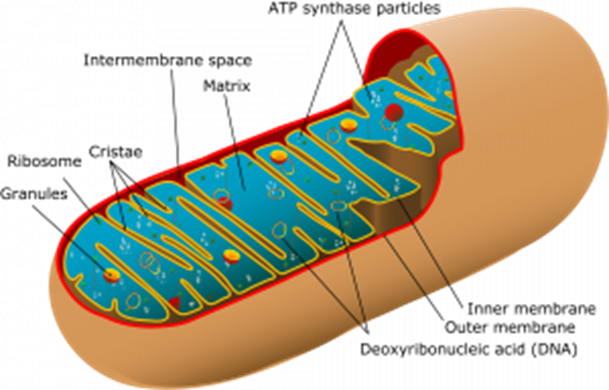 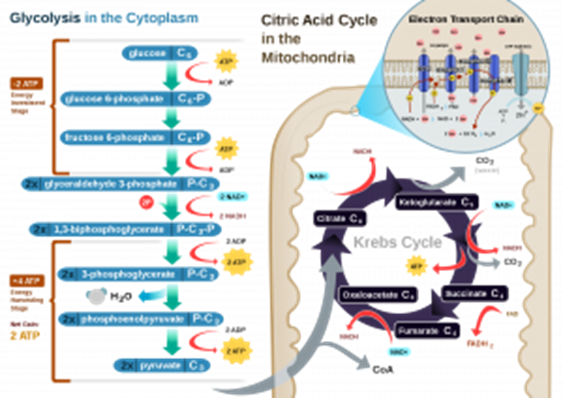 Glycolysis is the first stage and as it does not require oxygen and occurs in the cytoplasm it is in both anaerobic and aerobic respiration.

Therefore glycolysis results in the production of 2 NADH, 2 pyruvate and a net gain of 2 ATP.

The NADH and pyruvate are both needed for subsequent stages in aerobic respiration and therefore are actively transported into the mitochondrial matrix.

This reaction occurs in the mitochondrial matrix and converts pyruvate into acetyl CoA.

Pyruvate contains 3 carbons whereas acetyl CoA contains two, so a carbon is removed in this stage in the form of carbon dioxide. This is known as decarboxylation and requires decarboxylase enzymes. 2 hydrogen atoms are also removed to oxidise the carbon compound further to create acetate. This is known as dehydrogenation and is catalysed by dehydrogenase enzymes. The NAD picks up the hydrogen to become NADH. The coenzyme CoA combines with the acetate that is formed to create acetyl CoA, this is to assist in acetyl reacting in the Krebs cycle.

The reaction occurs twice per glucose molecule as there are two pyruvate molecules.

The overall products from the link reaction per glucose molecule are:

The acetyl CoA reacts with a four-carbon molecule, releasing coenzyme A and producing a six-carbon molecule that enters the Krebs cycle. In a series of oxidation-reduction reactions, the Krebs cycle generates 8 reduced coenzymes, 2 ATP by substrate-level phosphorylation, and 4 carbon dioxide are lost.

In total therefore, per glucose molecule 2 ATP, 6 NADH and 2 FADH are produced. The Krebs cycle is also known as the citric acid cycle. 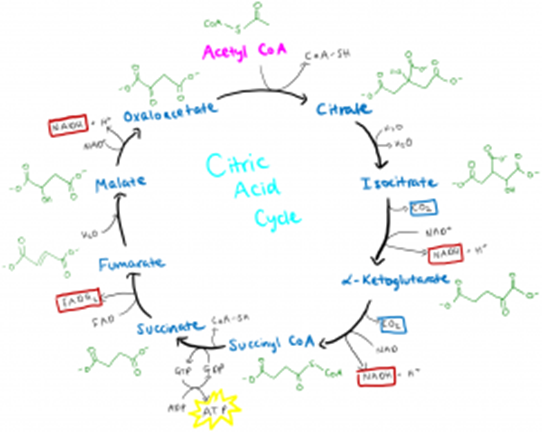 This is the final stage of aerobic respiration where most ATP is synthesised, and oxygen is used. This stage involves the transfer of electrons down the electron transfer chain and the movement of protons across the inner mitochondrial membranes. The movement of these protons is down a concentration gradient catalysed by ATP synthase, embedded in these membranes- this is another example of chemiosmotic theory. 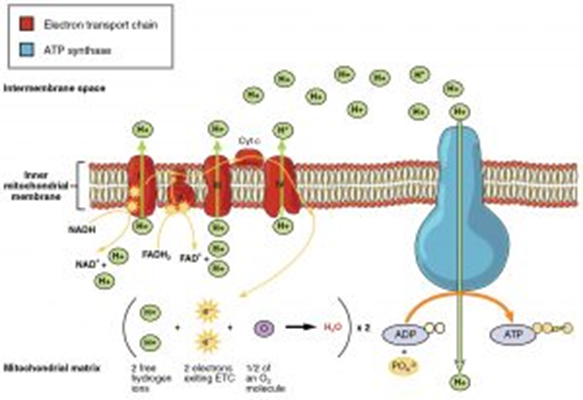 In this stage all the accumulated reduced coenzymes release the hydrogens and these split into protons (H+) and electrons (e-). The e- are passed down a series of electron carrier proteins embedded in the inner mitochondrial membrane, losing energy as the move (electron transport chain). The small amount of energy the electrons release pumps protons from the mitochondrial matrix into the intermembrane space. This creates an electrochemical gradient across the membrane. Therefore, the protons move down the electrochemical gradient back into the matrix via ATP synthase making ATP. This movement of H+ is known as Chemiosmosis. Oxygen is the final electron acceptor in the electron transport chain. The oxygen combines with the electrons and the protons to form water. 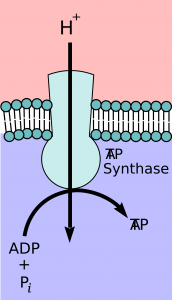 In the absence of oxygen respiration occurs anaerobically. The pyruvate produced in glycolysis is reduced to form ethanol (in plants and microbes) or lactate (in animals) by gaining the hydrogen from reduced NAD. This oxidises NAD so that it can be reused in glycolysis and ensures more ATP is continued to be produced. 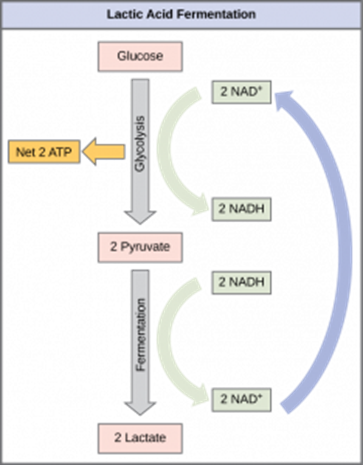 Anaerobic respiration is even less efficient, because only 2 ATP molecules and produced from one glucose molecule.

The respiratory quotient of each substrate can be calculated using the formula: