The gross structure of the human gas exchange system can be seen in the diagram below. 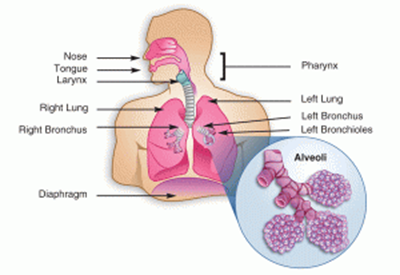 The trachea (windpipe) has C-shaped rings of cartilage for support and to ensure the trachea does not collapse when the pressure inside decreases during exhaling. The oesophagus, in the digestive system, lies directly next to the trachea, so the side on which they touch s the part of the C-shape where there is no cartilage to allow the oesophagus to contract and relax when moving food to the stomach.

The trachea also has goblet cells to release mucus to trap dust and pathogens, which is then swept up to the mouth to be removed, by coughing, by the ciliated epithelium cells.

There is smooth muscle within the trachea wall, which contracts if there are harmful substances detected in the air. This results in the lumen on the trachea constricting and reducing air flow into the lungs. There are also elastic fibres, which enable the lumen to dilate when the smooth muscles relax again. 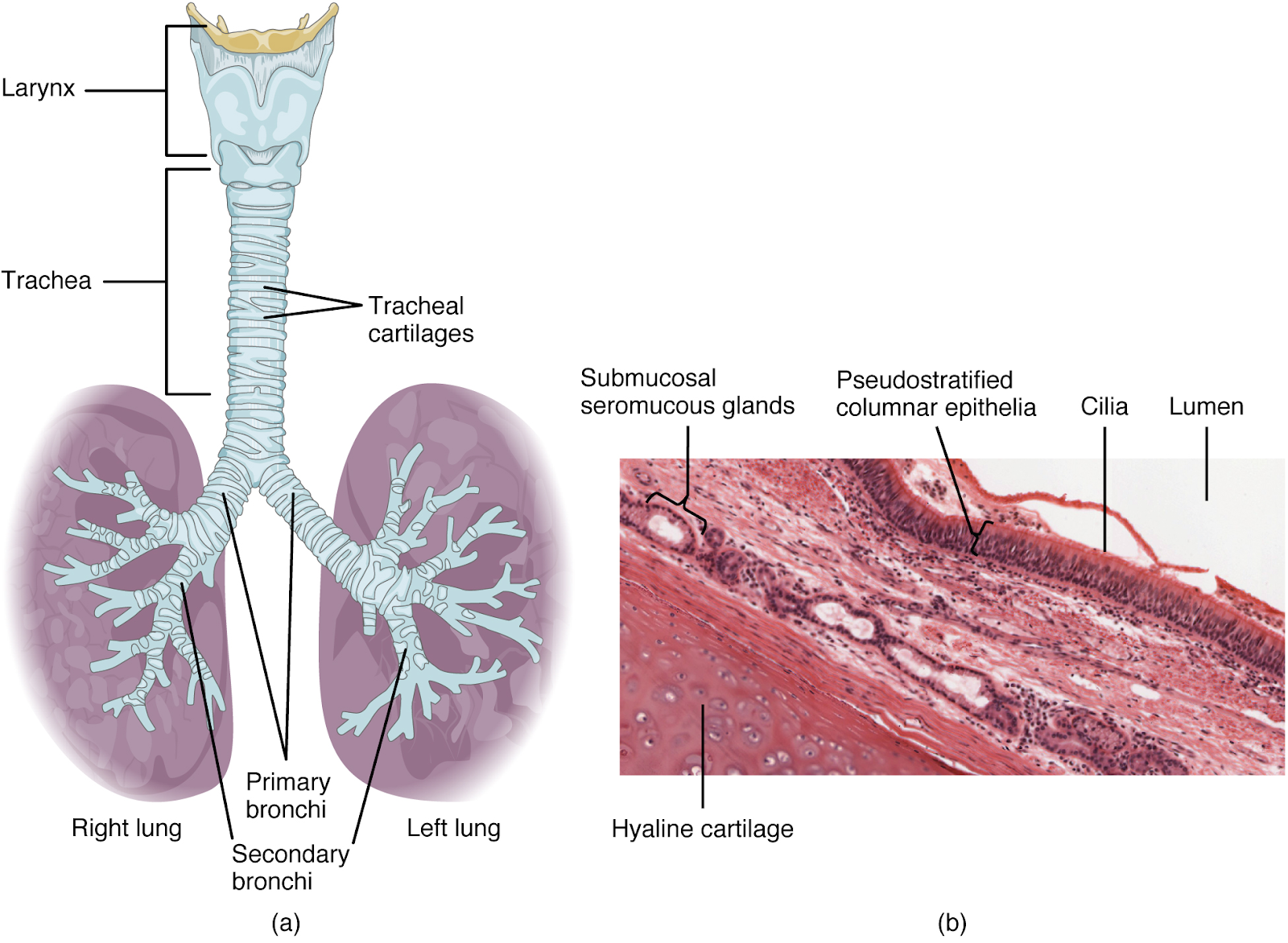 Ventilation is the mechanism of breathing and it involves the diaphragm and antagonistic interaction between the external and internal intercostal muscles in bringing about pressure changes in the thoracic cavity. 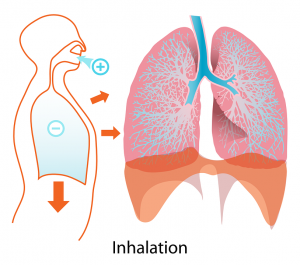 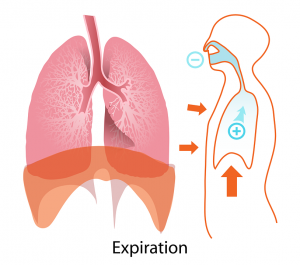 The volume of air inhaled and exhaled can measured using a spirometer, see below. 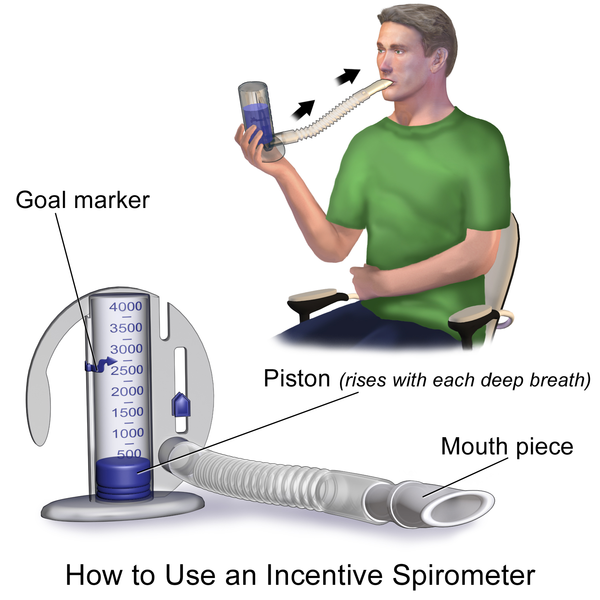 The graph below show the volume changes in the lungs. The tidal volume is the air inhaled (peaks) and exhaled (troughs) when at rest, where as the vital capacity shows the maximum volume or air an individual can inhale and exhale during a deep breath. The lungs never fully remove all air, and this air that remains in the lungs to keep them inflated is the residual volume.

Once the gases are in the alveoli, gases exchange with the blood. Alveoli are tiny air sacs, and there are 300 million in each human lung which creates a very large surface area for gas exchange. The alveoli walls are also very thin, made up of squamous epithelial cells, to minimise diffusion distance. Each alveolus is surrounded by a network of capillaries to remove exchanged gases, and therefore constantly maintains a concentration gradient. 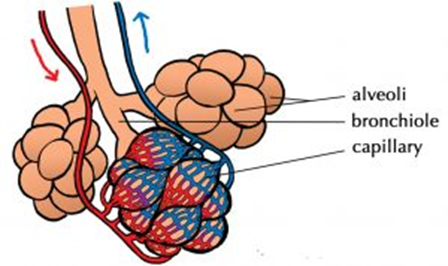 The relationship between the size of an organism or structure and its surface area to volume ratio plays a significant role in the types of adaptations an organism will have.

Small organisms, such as amoeba, have a very large surface area in comparison to their volume. This means that there is a big surface for exchange of substances, but also there is a smaller distance from the outside of the organisms to the middle of it. As a result, very small organism can simple exchange substances across their surface.

The larger an organism is, the smaller its surface area compared to its volume and the larger the distance from the middle to the outside. Larger organisms will typically have a higher metabolic rate too, which demands efficient transport of waste out of cells and reactants into the cells. As a result, they have adaptations that help make the exchange across surfaces more efficient.

The rate of diffusion can be calculated using Fick’s Law.

Single-celled organisms simply exchange gases across their body surface due to their large surface area to volume ratio.

Gas exchange in insects involves a tracheal system (trachea, tracheoles and spiracles). Gas can exchange by diffusion, as when cells respire they use up oxygen and produce carbon dioxide, creating a concentration gradient from the tracheoles to the atmosphere. The second method of gas exchange is mass transport, in which an insect contracts and relaxes their abdominal muscles to move gases on mass. When the insect is in flight the muscle cells start to respire anaerobically to produce lactate. This lowers the water potential of the cells, and therefore water moves from the tracheoles into the cells by osmosis. This decreases the volume in the tracheoles and as a result more air from the atmosphere is draw in. 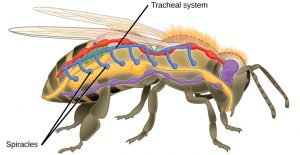 Fish exchange gases across their gills. Gills are made of gill lamellae and filaments and the process is dependent on the counter-current principle. Gill filaments are stacked at right angles to the gill lamellae to increase surface area.

The gill lamellae and filaments are thin, providing a short diffusion distance and the filaments have a network of capillaries to maintain a concentration gradient helped by the counter-current flow mechanism. This is when water flows over the gills in the opposite direction to the flow of blood in the capillaries. This ensures that a diffusion gradient is maintained across the entire length of the gill lamellae. 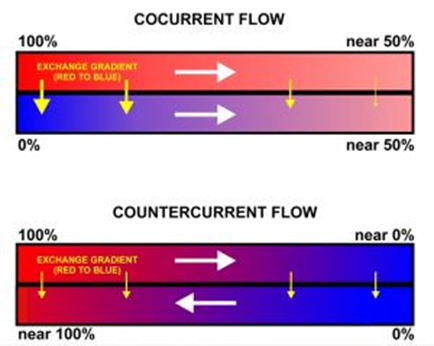 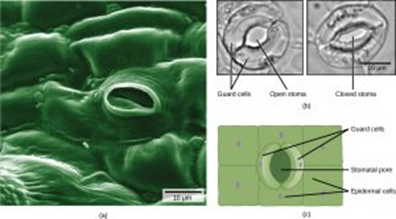 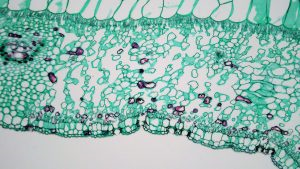 These pores can open or close, determined by the guard cells surrounding them. This is a mechanism to help prevent excessive water loss by evaporation, like the valves in spiracles in insects. Another similarity in how both plants and insects prevent water loss is that they both have a small surface area to volume ratio and have waterproof coverings. Xerophytic plants are native to very dry environments and have many additional adaptations to prevent water loss by evaporation. Their cuticle is very thick, they roll up to cover the stomata, the leaves are hairy to trap water vapour and the stomata are often sunken in pits. 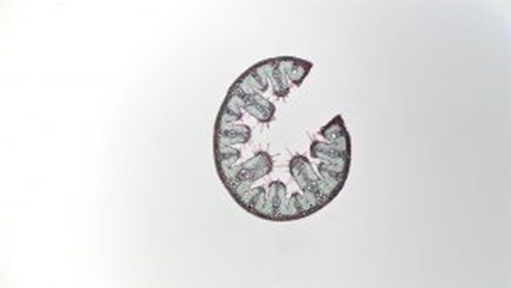