The Movement of Water

Water is first absorbed by osmosis via the root hair cells, adapted to maximise osmosis by having thin walls and a large surface area. Once this water reaches the xylem it is transports through the xylem hollow, thick-walled tubes to the rest on the plant. It is possible for the water to move in one direction, which is typically against gravity, due to water transpiring from the leaves and creating a pulling force on the water left in the plant.

Transpiration is the evaporation of water through the stomata, typically on leaves. 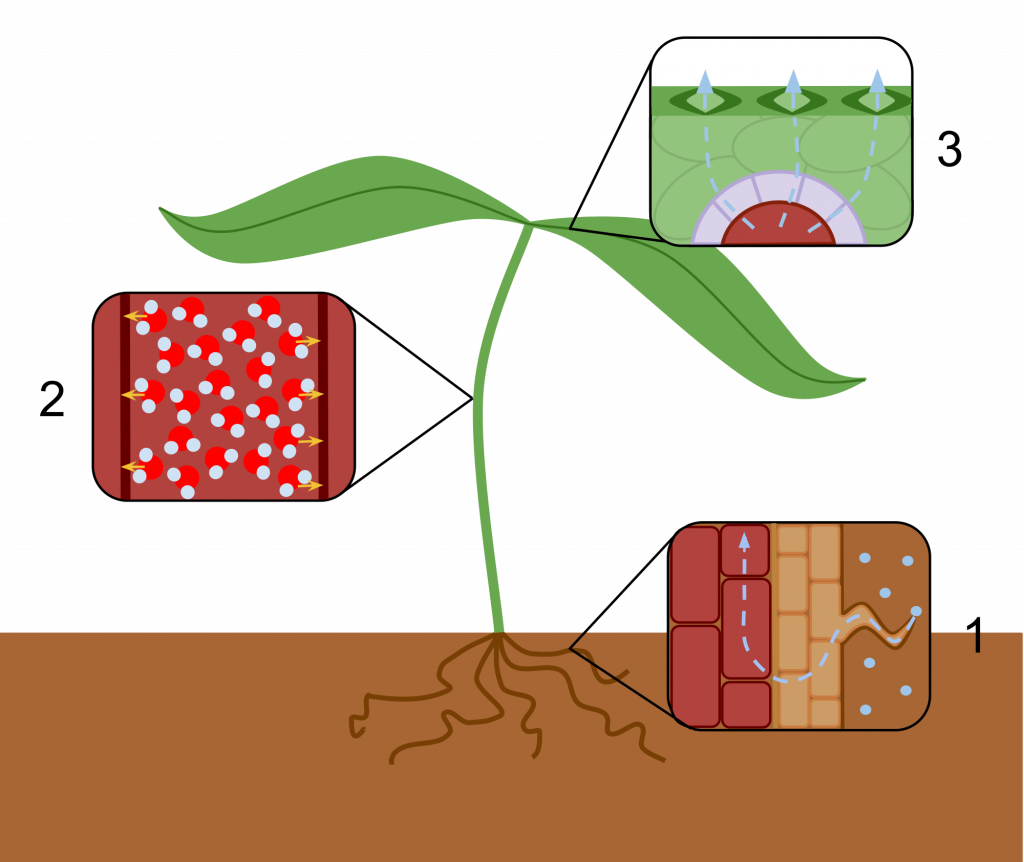 As evaporation is the conversion of liquid water to water vapour, an increase in temperature will speed up this process as the water molecules gain more kinetic energy to move. If the surrounding air is less humid or there is a lot of wind to carry away evaporated water molecules, then transpiration will occur faster due to a greater concentration gradient.

Plants are able to control water loss, as stomatal opening is controlled by cells called guard cells. Guard cells swell and bend when the plant has a lot of water, resulting in the stomata opening. Whilst water will evaporate out, carbon dioxide can also diffuse in for photosynthesis. Stomata open more when it is light and the plant cells are turgid. 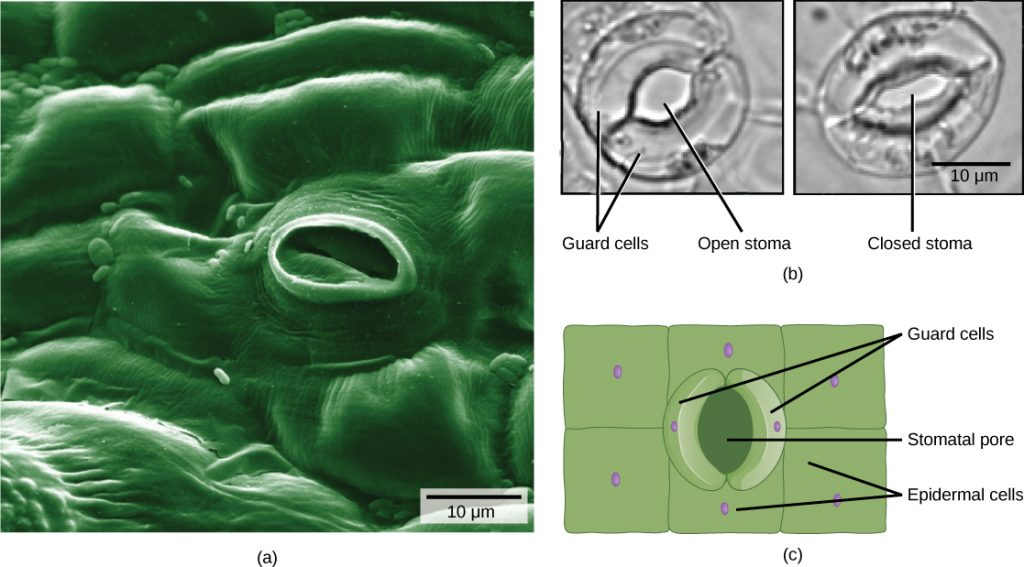 The movement of water up the xylem links to the properties of water.

Due to the dipolar nature of water, it forms hydrogen bonds between water molecules creating cohesion. 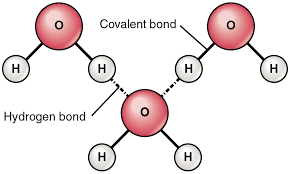 This cohesion results in water forming a continuous column in the plant stem. Tension, or a pulling force, is created when the water evaporates out of the stomata. This movement of water out of the stomata results in the water column being pulled up the xylem towards the stomata, this is known as the transpiration pull. This pull will draw up the water and also put tension on the xylem, making it narrow and longer. This change in diameter of the xylem is measurable, for example the diameter of tree trunks will change according to transpiration rates.

Xylem cells are adapted to form this continuous water column as they are hollow cells. They are hollow because they are dead cells that do not contain any organelles and they have no end walls, to enable a column to from. 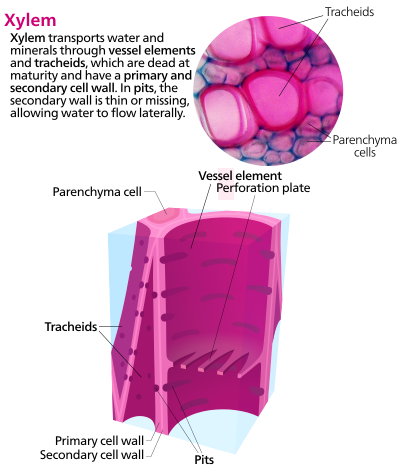 Xerophytes are plants with adaptations to reduce water loss, and are therefore found in locations with limited water, for example the desert.

Marram grass, in the image below, are found on sand dunes, which despite being next to the ocean there is limited water due to sand being so porous. 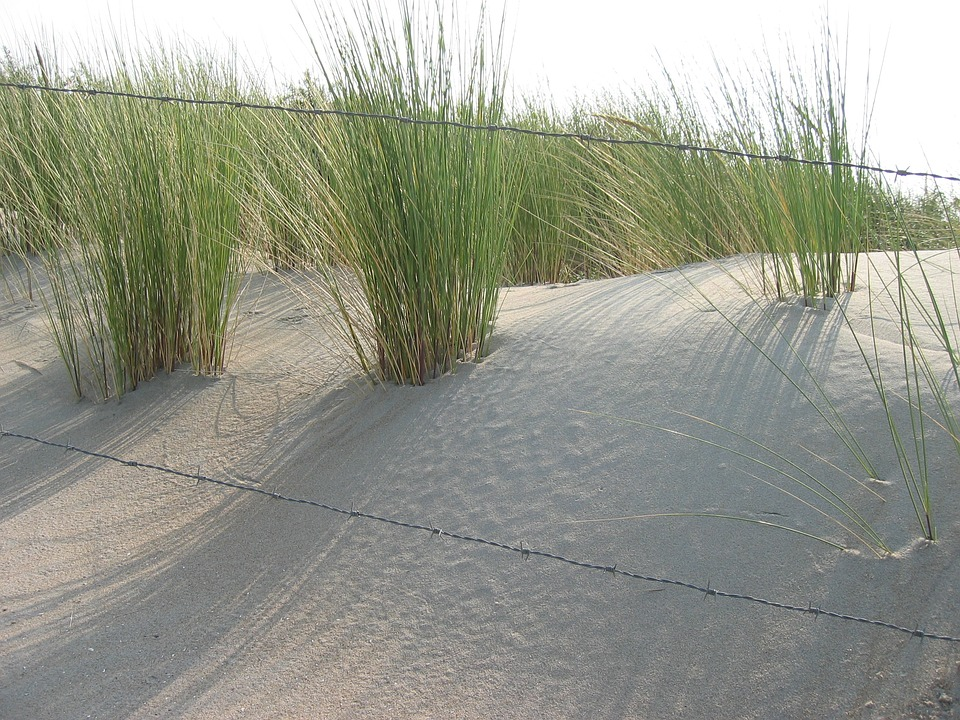 The micrograph below shows the adaptations more visibly. Firstly, the leaves are rolled and this helps trap any transpired water vapour to create a humid environment and prevent further transpiration. Secondly, there are tiny hair like structures and the stomata are sunken in pits, again to trap humid air. Trapping humid air reduces the water potential gradient, which is why transpiration is reduced. Finally, the xerophytes tend to have a thicker waxy cuticle to prevent water loss and extensive root networks to reach any available water. 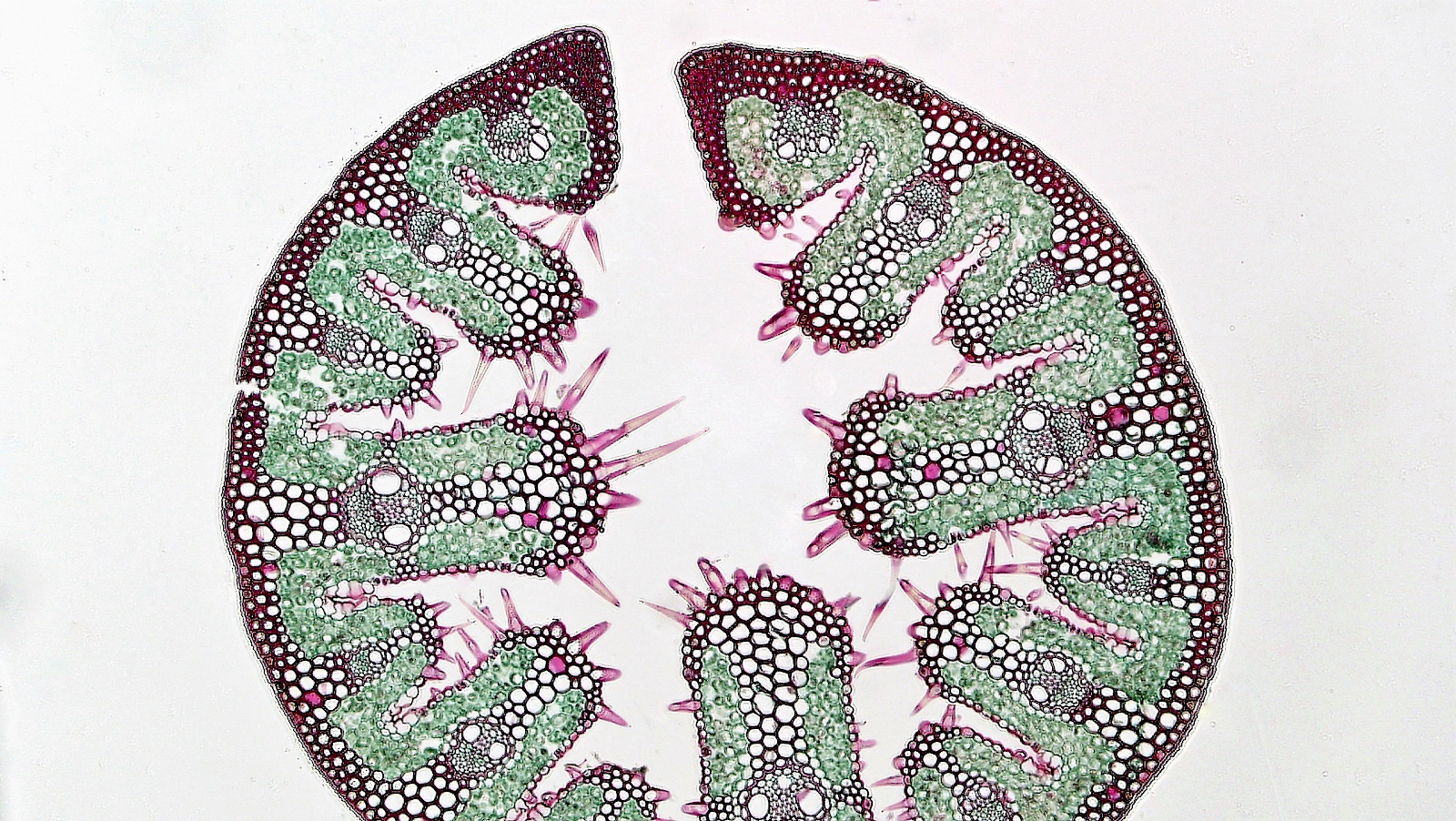 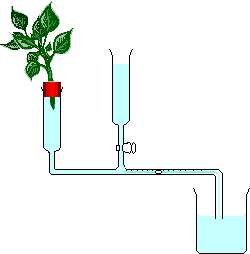 A sample of a plant must be cut from a plant underwater, this is to prevent any air from entering the xylem and breaking the water column. The potometer is filled with water and all air bubbles are removed. The cut leafy plant is then attached to the potometer, using rubber seals and petroleum jelly to make the equipment air tight. One air bubble is then introduced into the equipment and the distance that this air bubble has moved towards the plant is recorded. To convert this into an estimate of transpiration rate the distance the bubble moved can be used to work out the volume of water in the tube that evaporated. This volume is divided by the time it took to lose that volume of water to get a rate.

This apparatus can be reset and different conditions applied to the leaf to see if the rate changes. For example, a lamp could be used to replicate sunlight, a fan may be applied to replicate wind or a plastic bag over the plant to increase humidity.

Phloem is the tube responsible for the transport of organic substances in plants, such as sugars. This transport is called translocation and is explained by the mass flow hypothesis.

Phloem tissue is made up of different cells. One cell type are the sieve tube elements, which are long and thin arranged as a column. The name sieve is used to describe the fact that the end walls are perforated, like a sieve. Next to these cells are companion cells. 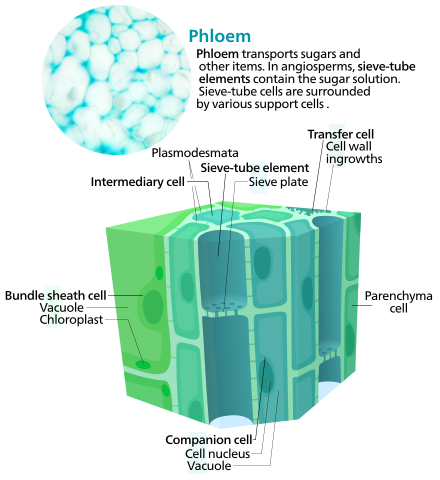 Translocation is the movement of organic molecules. It is essential because photosynthesis only occurs in leaves, so this sugar that has been produced needs to be transported to all the cells in the plant to use for respiration.