Biotic factors and the living components of an ecosystem interacting together, such as interspecific and intraspecific competition and predation also affect population size.

Interspecific competition is when members of different species are in competition for the same resource that is in limited supply. This could be competition for a habitat, food or water. The individual better adapted to the environment is more likely to succeed in the competition. 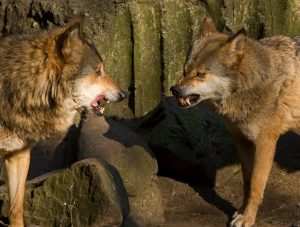 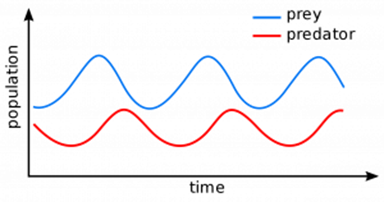 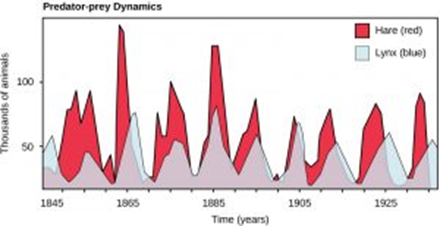 This is the change in an ecological community over time. A primary succession starts with a pioneer species colonising bare rock or sand. Pioneer species, such as lichen, are adapted to survive harsh abiotic factors and through their death and decomposition they change the abiotic factors to become less harsh and form a thin layer of soil, humus. Mosses and smaller plants can now survive, and they further increase the depth and nutrient content of soil.

This pattern continues, and as the abiotic factors continue to be less harsh larger plants can survive and change the environment further. Each new species may change the environment in such a way that it becomes less suitable for the previous species, and they become out-competed. Changes that organisms produce in their abiotic environment can result in a less hostile environment and increases biodiversity. The final stage in a succession is known as the climax community, and this is dominated by trees. 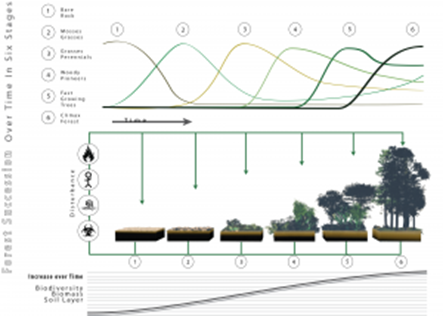 The destruction of habitats, usually due to human activity, results in a loss of food and space for organisms and can lead to extinction. To conserve habitats succession is often managed.

By maintaining earlier stages in succession, and preventing a climax community, a greater variety of habitats are conserved and therefore a greater range of species survive. This can lead to conflict between human needs and conservation in order to maintain the sustainability of natural resources. To try and manage this conflict compromises are needed, for example forests can be coppiced to provide timber for fuel and furniture, whilst still allowing the tree to survive. 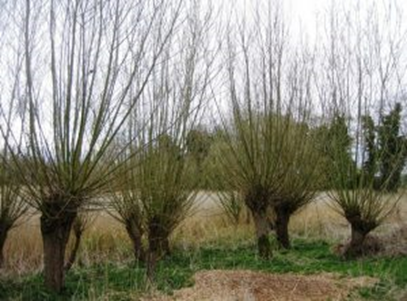 Whole ecosystems can be managed too, which can be seen in the oceans with fishing regulations to ensure sustainable fishing is taking place.

It would be too time consuming and inaccurate to count every individual within a population, and therefore samples are taken instead to provide an estimate. Population sizes can be estimated via a range of technique, but there are a few aspects in common. For the sampling to provide an accurate estimate that is representative of the population size, many samples must be taken, and sampling should be random to avoid bias.

Quadrats are using to sample slow-moving or non-motile organisms (such as plants). A quadrat is a frame typically 0.5m x 0.5m in size and can be gridded or open. 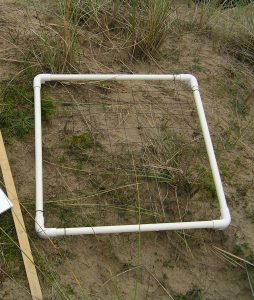 To randomly sample an area you could place two 20m tape measures at right angles to create a gridded area to sample. Using a random number generator, such as a calculator, two values can be generated to use as coordinates in the gridded area created. The quadrat should be placed on the coordinate and either the number of the species you are sampling could be counted or a percentage cover could be estimated. This should be repeated at least 30 times to provide a representative estimate.

Sometimes a belt transect is more appropriate than random sampling. A belt transect is when a tape measure is placed through an ecosystem that is not uniform, such as a beach rocky shore. To ensure you gather data for each area, the quadrat can be placed at intervals along the transect to measure the impact of the changes in the environment.

The three ways to estimate the population in a quadrat are frequency, density and percentage cover. Frequency is when you record how many squares out of the 100 in a quadrat the species is present in. Density is when every individual of that species in the quadrat is counted. Percentage cover is when you estimate the percentage of the whole quadrat that is covered by the species, using the 100 grids in the quadrat to assist.

As motile organism can move out of a quadrat the mark-release-recapture method is used. In this method animals are first trapped and then marked. The mark must be non-toxic, all weather resistant and not impact reproduction or predation. 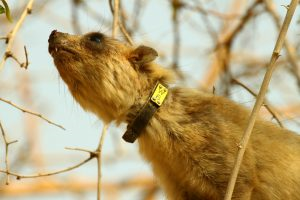 The animals are then released and left to redistribute in the population. The traps are used a few days later and a second sample is taken. The re-sampling continues until at least 10 samples are collected. The population size can be estimated using the formula:

This method assumes that the marked individuals released distribute themselves evenly among the population after being released, that there is no migration and no births or deaths.

Nutrients are recycled within natural ecosystems, exemplified by the nitrogen cycle and the phosphorus cycle.

In any ecosystem, plants are the producers in a food web as they are able to produce their own carbohydrates using carbon dioxide in the atmosphere or water.

Between each trophic level in a food web the majority of the energy is lost due to respiration and excretion. The remaining energy is used to form the biomass. 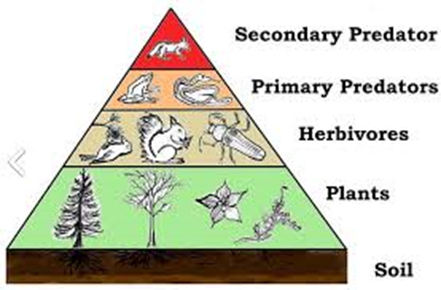 The amount of biomass remaining in an organism can be measured in terms of mass of carbon or dry mass of tissue per given area. How productive an ecosystem is dependent on the abiotic and biotic factors. Plenty of water, light, warmth and green plants will maximise the rates of photosynthesis and therefore result in more carbohydrates being produced in the plants. This can be quantified using GPP and NPP.

Gross primary production (GPP) is the chemical energy store in plant biomass, in a given area or volume. It is the total energy resulting from photosynthesis.

Net primary production (NPP) is the chemical energy store in plant biomass taking into account the energy that will be lost due to respiration (R).

Rates of productivity are recorded using the units kJ ha–1 year–1. kJ is the unit for energy, but these units also includes per unit area and per year. It is recorded as per unit area to standardize the results to enable environments to be compared - it takes into account that different environments will vary in size. The units are also per year to take into account the impact seasons will have on rain, light and heat – it provides an annual average to allow fair comparisons between environments. 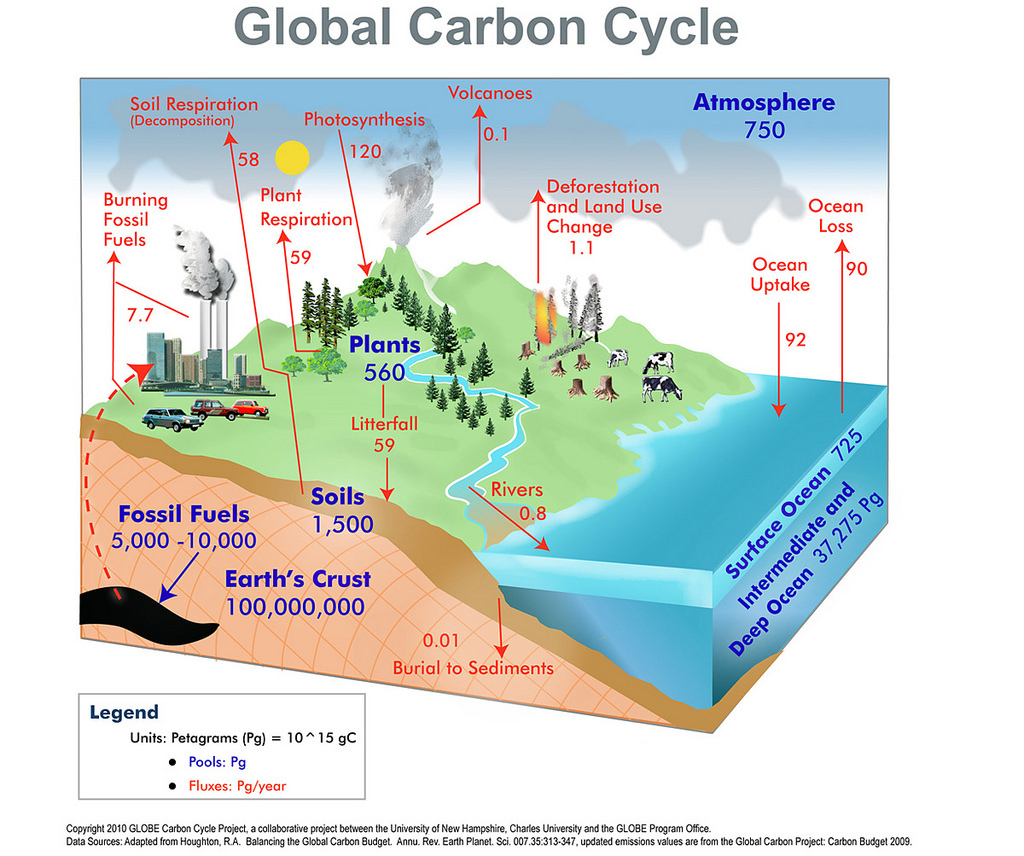 An imbalance in this cycle is leading to ocean acidification and global warming. This imbalance is caused by deforestation and burning too many fossil fuels, therefore less carbon dioxide is being used in photosynthesis and more is being produced by combustion.

Nitrogen is an important element that is needed to create amino acids/proteins, DNA, RNA and ATP.

The cycle is split into four key processes: nitrogen-fixation, nitrification, denitrification and ammonification.

Nitrogen-fixing bacteria, such as Rhizobium and azotobacter, are able to break the double bond between the two nitrogen atoms in nitrogen gas in the atmosphere and fix this nitrogen into ammonium ions. The bacteria is either free-living in the soil (azotobacter) or it is symbiotic (mutualistic relationship), living in the root nodules of plants (Rhizobium). This is common in leguminous plants such as clover and beans.

This stage is not useful as it returns the nitrogen in compounds back to nitrogen gas in the atmosphere, so it cannot be absorbed by plants. Anaerobic denitrifying bacteria do this.

Proteins, urea and DNA can be decomposed in dead matter and waste by saprobionts. These are bacteria and fungi that can digest waste extracellularly, this is saprobiotic nutrition, are returns ammonium ions into the soil. 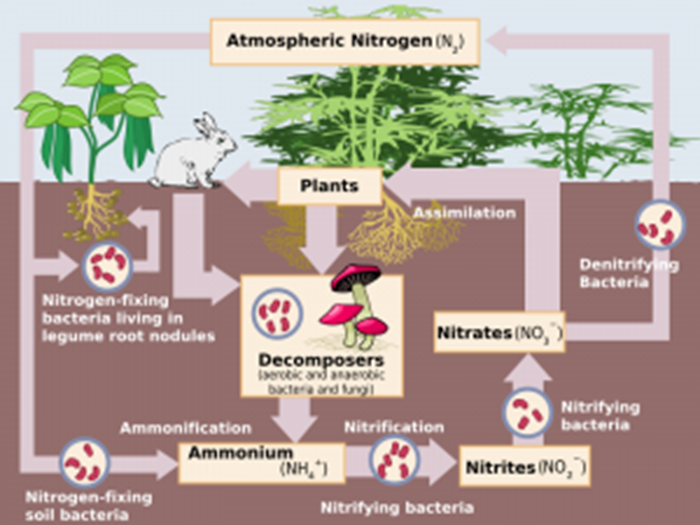