The economic benefits of the Boom were not evenly spread:

However, on the whole most Americans did get slightly more prosperous, and more significantly life got cheaper even for families who were not getting richer.

Along with the economic development of the 1920s ‘Boom’, American society also saw great changes. This was called the ‘Roaring 20s’, as entertainment thrived; jazz spread like wildfire, people had more ‘disposable income’, and parties grew in popularity.

Furthermore, the role and status of women within society was changing – from a very restrictive and conservative role to a freer and more independent life. Women received the right to vote in 1920, and by 1929 there were over 10 million women who had jobs (25% more than at the start of the decade).

Celebrities from the time (Douglas Fairbanks, Enid Bennett, and Wallace Beery) listening to a radio. These were very new objects of luxury, and were being marketed through celebrity campaigns. The Entertainment industry was no stranger to the consumerism and marketing of the 1920s Boom.

American sport thrived in the 20s, as public interest soared and sportspeople started to become celebrities. In turn, this attracted huge amounts of advertising, and investment – and sports stars were paid highly for their endorsements of products. Babe Ruth was a particular example of this, who played for the New York Yankees – he set a record for home runs which lasted until 1961! This made him a huge celebrity, and national hero. By the end of the 20s he was earning over £6 million a year (in today’s money). Similarly, golf became a huge phenomenon, with Bobby Jones becoming the leading star in that sport.

Radio was particularly crucial to the increasing influence of sport, and all key sporting events would be covered by radio stations – these would even be played in many bars and restaurants. Over 60 million people tuned into the 1927 Boxing championship match between Gene Tunney and Jack Dempsey. 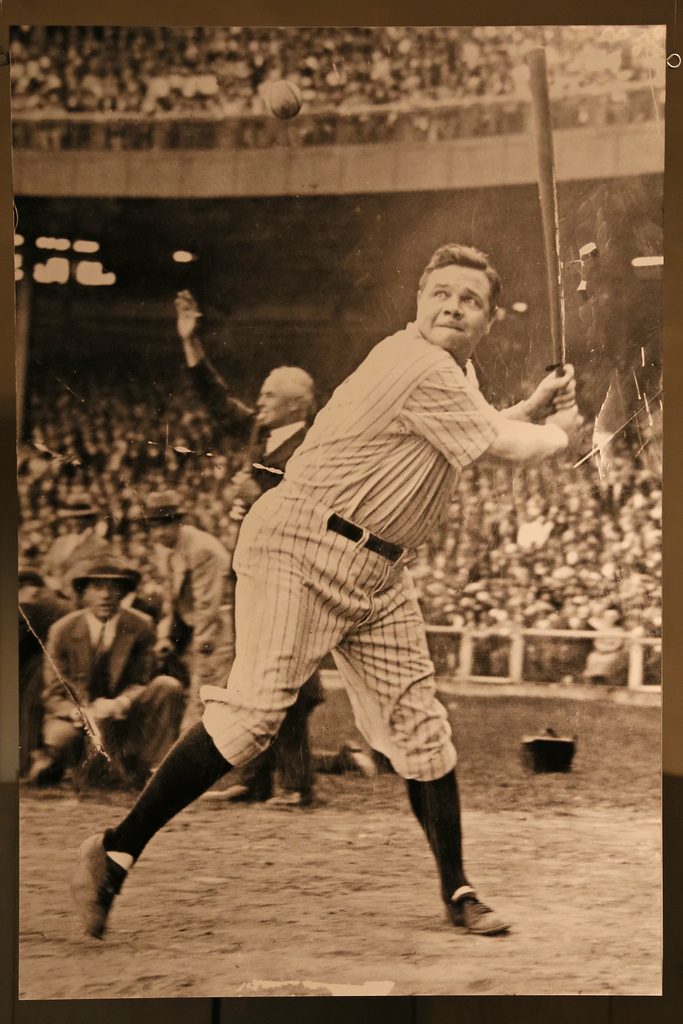 Babe Ruth, about to his one of his record-breaking swings. The phrase ‘knocked it out of the park’ is widely believed to have originated from watching Babe Ruth play.

Jazz came from the southern states, predominantly from African-American communities, and was based around improvisation, with fast and lively beats. This music followed the workers from the southern States, as they moved north (towards New York and Chicago in particular), for work. The fun nature of the music appealed to city people, as jazz bars, dancehalls, clubs, and restaurants opened in all major cities; and the music quickly caught up younger generations of the white American population (although some older generations disapproved). Duke Ellington was one of the most famous, and successful, jazz artists, and he made his name through live performances as well as record deals. Along with this new style of music developed new dances – the Charleston was the most famous, and was accompanied by the one step, the black bottom, and the tango. 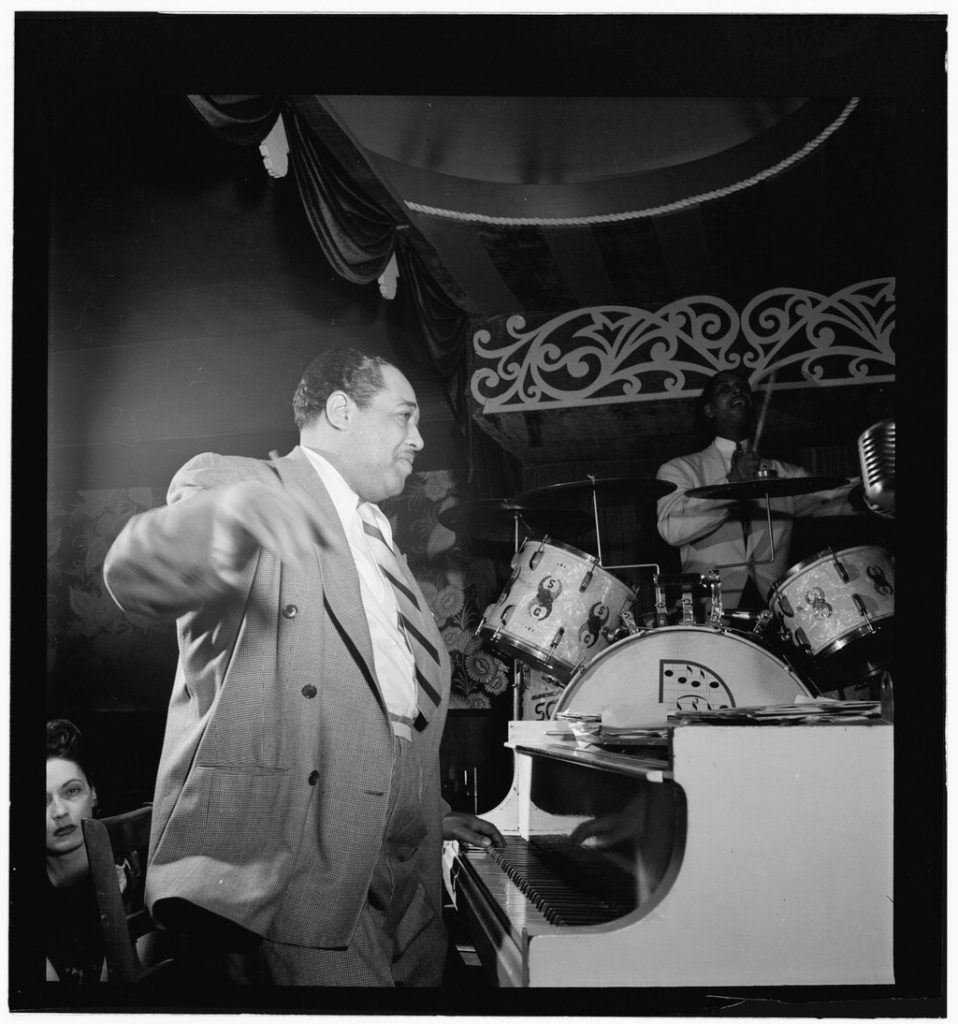 Duke Ellington running a jazz show in a Chicago basement. Chicago was one of the hubs of American Jazz.

The ‘Roaring 20s’ was a time of crazes and fads – from new board games and obsessions over crosswords to crazes such as ‘marathon dancing’ (dancing literally until you could not keep going), popular culture exploded with new ways to spend time. These attracted media attention, large public gatherings, and anyone who managed to set a new ‘world record’ became an instant celebrity.

Despite prohibition, parties continued to grow in popularity – both in clubs and city apartments. Many followed prohibition, and followed other trends to replace the role of alcohol in social gatherings; many people reported getting ‘drunk on dancing’. Of course, in the big cities there were many opportunities to cheat prohibition, and alcohol was pretty easily available in hidden bars and speakeasies. 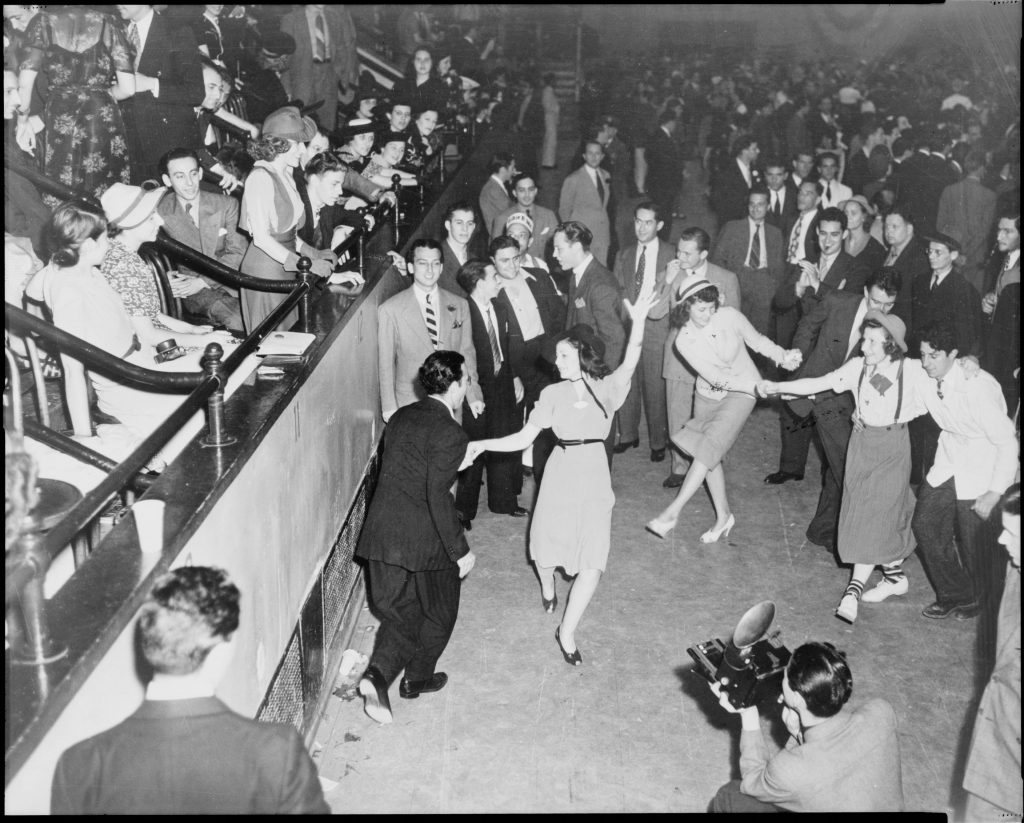 Dancers at a 1920s ‘Jitterbug’ dance. The Jitterbug was a dance craze that swept America, getting people ‘drunk on dancing’, where people would keep on dancing all the way through the night.

In the 20s, Hollywood was only just emerging as the centre of the film industry, but by the end of the decade it was the dominant force. Movie audiences tripled, from 30 million to over 100 million a week during the 1920s. Again, this was hugely due to the influence of celebrities – or, in movie terms, ‘stars’. The ‘star system’ in U.S. cinema turned celebrities into brands, and ensured that the stars behind the brands were constantly involved in publicity, events, and networking. Charlie Chaplain was just one example, and his movies became cult phenomena.

Until 1927, all movies were silent, then ‘talkies’ emerged, with ‘The Jazz Singer’ becoming the first publicly released movie with sound. This added a new appeal to movies, and also made the star system even more powerful as people were desperate to hear their favourite actors speak. Those who could sing became even more popular and commercial than before.