In 1932, in the depths of the Great Depression, there was a Presidential election in which Franklin D. Roosevelt beat Herbert Hoover in a landslide. Roosevelt won the election in 42 of 48 States (there are now 50, but Hawaii and Alaska were not official States at this point). Because of the Unites States Constitution, Roosevelt was elected in November 1932 __but did not become President until March __1933 – in this time, Hoover remained President, and Roosevelt harshly criticised everything he did.

Roosevelt’s campaign was a potent mix of grand promises, attacks on the Republicans’ record (and Hoover’s inaction), and presenting himself well. In particular, Hoover proposed a ‘New Deal’, which captured the imaginations of America, and signalled a radical shift in policy. 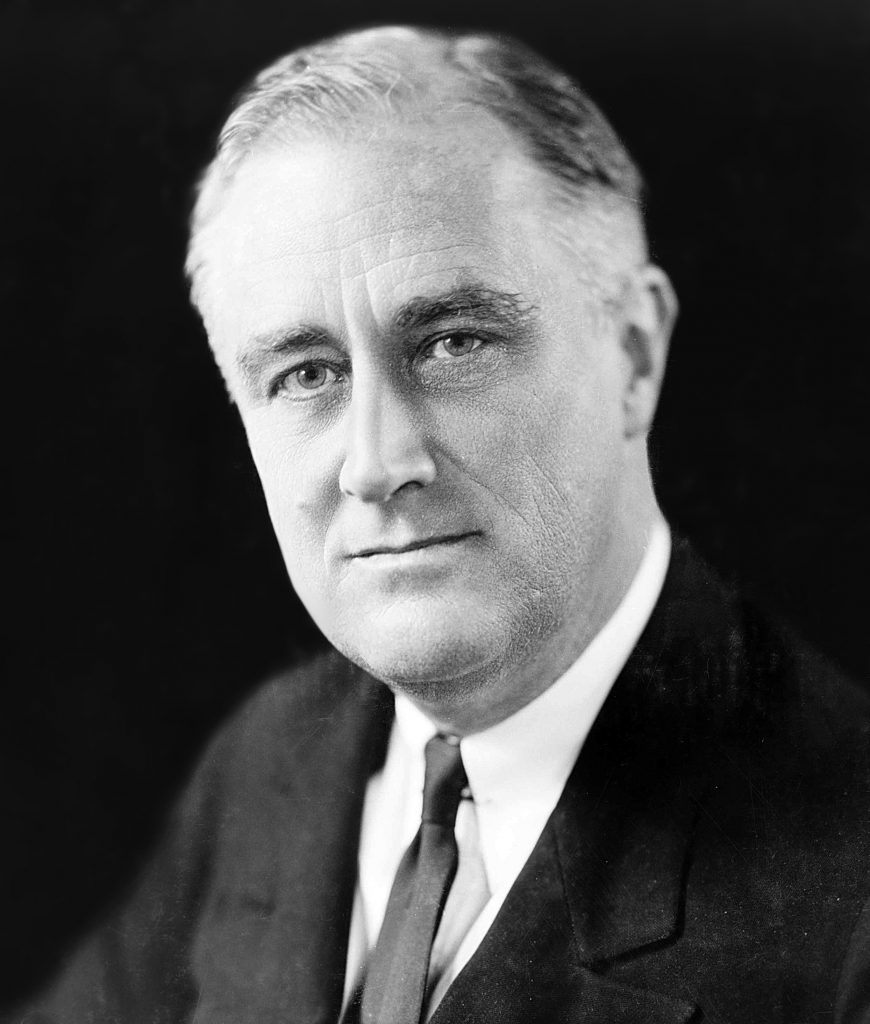 Franklin Delano Roosevelt, the 32nd President of the United States, of the Democratic Party. Roosevelt annihilated Hoover in the 1932 Presidential Election.

Who was Roosevelt, and how did he win?

Roosevelt was an only child of a very rich family – he was spoiled, went to private school, and then went to Harvard Law School. In 1905 he married his cousin, Eleanor, and only became a politician in 1910, when he was 28. In 1921, Roosevelt contracted polio (which nearly killed him); he never fully regained the use of his legs, and had to use a wheelchair for the rest of his life. Many believe that this gained him some sympathy.

Roosevelt was a Democrat, and there hadn’t been a Democrat since Woodrow Wilson, who was affectionately and nostalgically remembered, and no Democratic President elected in the 1920s. People were ready for a change from Republicans, especially as they blamed Republican policy for the uncontrollability of the stock market, Hoover’s poor response, and the Great Depression in general. 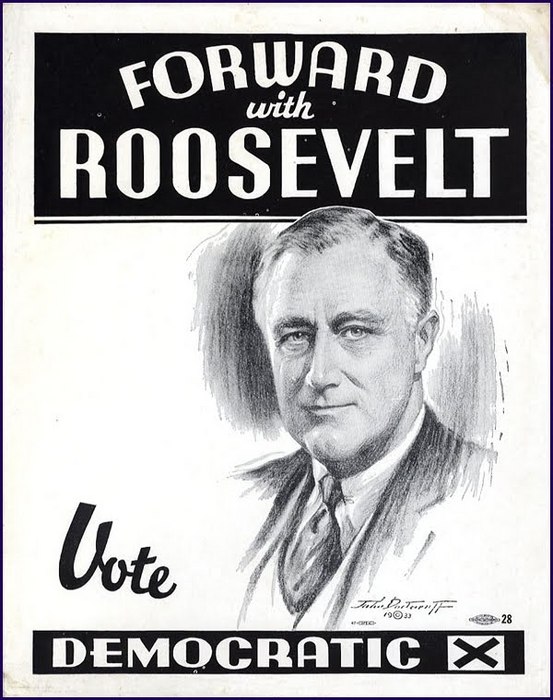 The Democrats had not been in power since the early 1920s; however, that was a time that people remembered fondly - everyone had been happy at the start of the Boom. People wanted to go back to this time, which was compounded by a decided rejection of Hoover and Republicanism.

Roosevelt had an important, and successful job, in the First World War, organising the U.S. Navy. He then had to take out some time for health, but returned to politics in 1928 to win the election for Governor of New York. Whilst he had not held many posts, he had a good record, and defeated two significant opponents in the election.

Plans for the Great Depression

Whilst he was the Governor of New York, Roosevelt was fairly successful in helping those worst affected by the Great Depression, largely through creating jobs for the homeless in upgrading the New York subway and transport systems (this also boosted the city economy).

He planned the scale this up as President – with a policy called the ‘New Deal’, which was based around the ‘Three Rs’:

The main gist of Roosevelt’s ideas were that the government would have a more active role in the economy, and would stop the rich exploiting the poor. He promised more public works and relief schemes. He declared he would experiment with new ideas to revive agriculture and industry.

In reality, many of his ideas were quite traditional and sometimes they were vague and contradictory, but the electorate was desperate for change and liked the promises of a “New Deal” and “Action and Action Now”. 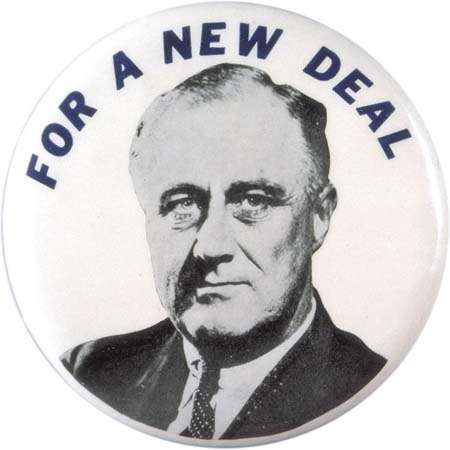 Roosevelt’s slogans were catchy and popular - they certainly helped him get attention and win.

Strength of his Election Campaign

Roosevelt ran a huge campaign – at times he was making up to 15 speeches a day. He also had an official campaign song, ‘Happy Days are Here Again’, which is still popular today. Furthermore, Roosevelt made sure that his allies were criticising Hoover; however, in his own campaign he maintained a public image of positivity, trying to show Americans the hope for something different.

Democrats made continued fun of the ‘tired’ Republican slogan that ‘prosperity is just around the corner’, and the Republicans proposed very few new ideas to tackle the Depression. Hoover’s track record was fairly poor, but he did not acknowledge this – maintaining an insistence that the Stock Market would sort itself out, and it was everyone’s individual responsibility to get themselves out of the Depression. His election campaign was greeted with protests and even egg-throwing. Hoover himself became fairly hated.

In contrast to Hoover, Roosevelt ran a positive and energetic campaign. He travelled around America to bring his message to ordinary people, in spite of his disability from polio. He was much more approachable and charismatic than Hoover, and a more confident public speaker.

Between 1933 and 1944, Roosevelt addressed the nation with 30 radio broadcasts. In these speeches he addressed a wide range of subjects, from banking to European politics. These broadcasts became known as “fireside chats”. They were well received by the American people. 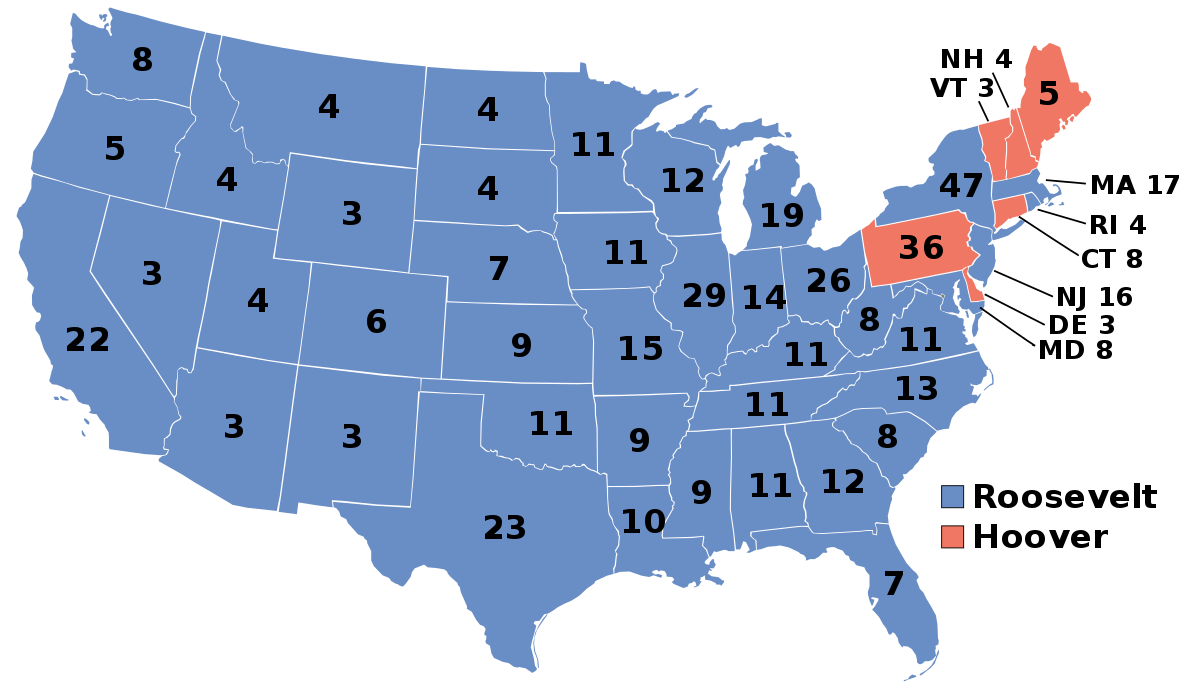 Roosevelt went on to win 42 of the (then) 48 States. This was a massive, landslide victory.