You need to know the following five events:

We will look at each event in turn, with a brief profile and description, and analysis of failure and success. 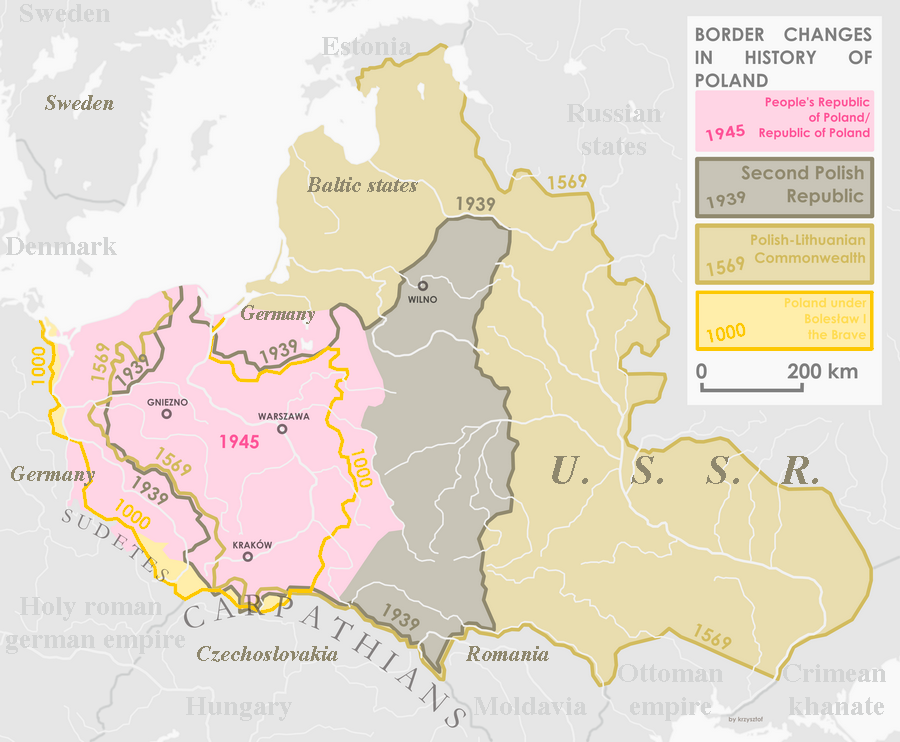 Vilna was a dispute that involved Poland, and where Polish people were living. (Vilna is marked as ‘Vilno’ on the map). You can see from the map how Polish borders have changed over the centuries, and why it was complicated to work out who / where was rightfully Polish.

Poland and Lithuania were both new countries that had been (re)created by the Treaty of Versailles. As a result of being new, their borders and populations were quite unstable. A city called ‘Vilna’ had been chosen to be Lithuania’s new capital; however, most of the people living there were Polish.

The League reacted fairly quickly, and told Poland to leave – using mitigation and a moral condemnation (the first two powers of the League).

The League’s effectiveness was hindered, as France thought Poland was an important ally against Germany. As such, France blocked any attempts from the League to take action any further than moral condemnation. Britain weren’t that bothered, and refused to get any more involved if France weren’t going to.

As a result, nothing happened. Poland ignored the mediation and moral condemnation from the League, and kept their army in Vilna. Soon, Vilna was accepted by all to be a Polish city. Protests from Lithuania fell on deaf ears.

Definitely a failure! This was the first time that the League had been asked to do something, and they did almost nothing. In particular, it showed that all members of the League were not equal, so Collective Security was not going to work. Similarly, the idea that the League represented the end of secret diplomacy was wrong, as France went behind everyone’s backs to make the deal with Poland.

The Aland Islands sit between Sweden and Finland, in the middle of the ocean. They are almost exactly halfway between the two countries. Both Sweden and Finland claimed that they should own the islands, and threatened war over this.

The League investigated the claim, as they were called in. They found that Finland should own the islands, for historic reasons. However, through mitigation they compromised that they would be demilitarised. This recognised Sweden’s main fear – that they could be used to invade Sweden. As such, Finland could not build military bases on the islands.

Sweden and Finland agreed to these terms, and the League managed to avert war.

This was definitely a success for the League. They avoided war, and were able to reach a compromise which basically made both countries happy. Furthermore, they had again reached this through mediation, which showed that the League was becoming a good organisation for settling disputes peacefully, through diplomacy.

Upper Silesia was land on the new border between Poland and Germany. Both Polish people and German people were living there. Both countries wanted the area, because it was industrially rich and had lots of minerals such as coal and steel. Because both countries claimed it, and citizens of both countries lived there, the League agreed to decide the ownership through Plebiscite.

Britain and France conducted and oversaw the Plebiscite in 1921, which voted 60% to become German.

Poland complained, protesting that the vote was inaccurate and misrepresented the overall area. The League compromised, and split the area into various regions. Poland got most of the industrial areas, Germany got more of the farming areas.

To start with, both Poland and Germany accepted this – neither got everything they wanted, but accepted that some mediation had produced a fair compromise. The League put a lot of work into trying to make sure both sides got an equal share.

When the final boundaries were drawn, Poland protested again. They complained that Germany got 2/3 of the land (even though Poland got the richer part), and that over half a million Polish people would still be stuck living in German parts. Germany also complained, for they lost ¾ of the coal mines they had previously owned in the area. This created increased tension between both sides. They eventually accepted the settlement, but relations never recovered.

This was certainly an improvement from Vilna, but it was far from a great day for the League. It turns out that however the League had handled this, they would have faced complaints. Most historians agree that, in this situation, the League made the best of a bad situation.

Crucially, the League were seen to act fairly and impartially. By allowing the people to decide through Plebiscite, and then adjusting their work to fit the regional outcome of the vote, showed that the League was trying to implement self-determination equally. Similarly, Poland received a lot less preferential treatment than before.

Therefore, a mild success for the League’s reputation, but one which still made relationships between Germany and Poland get worse. 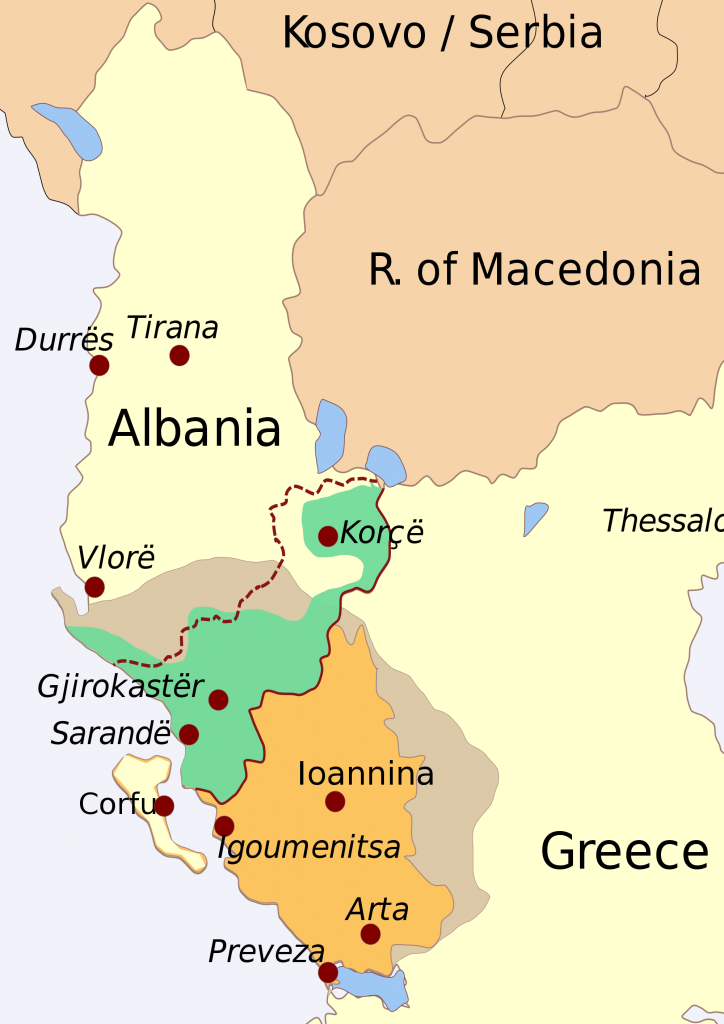 This map shows the disputed area between Greece and Albania.

During the Paris Peace Conferences, not all boundaries were ultimately decided upon. One border which had to be finalised was the border between Albania and Greece. The League asked an Italian general, Tellini to do this for them. Unfortunately, Tellini was murdered whilst carrying out this work.

The Italians, under their dictator Benito Mussolini, were angry, and blamed Greece. Mussolini demanded compensation and punishment for the killers, but the Greek government did not cooperate and denied responsibility. In retaliation, Mussolini invaded the Greek island of Corfu, and proceeded to bomb it heavily.

Greece appealed to the League of Nations, who condemned Italian actions. They demanded that Mussolini withdraw his troops; however, Italy was a permanent member of the Council. As such, Mussolini was able to use his influence to insist that Italy would withdraw, but Greece would still have to pay compensation. The Council agreed to this, even though they knew Greece wasn’t guilty – because otherwise Italy would veto all votes.

This was possibly the largest failure of the 1920s for the League. They had been utterly ineffective in preventing or resolving conflict. The League had been bossed around by one of its strongest members. As such, people believed that events in Corfu showed that the League had one set of rules for small countries, and a different set of rules for rich and powerful ones.

This also showed the lack of power in League sanctions – Italy had been able to prevent the League from using economic or military sanctions against them, because they had a veto on the council.

In 1925, Greek soldiers were killed on the border with Bulgaria. In response, Greece invaded Bulgaria. Bulgaria appealed to the League for help.

The League condemned Greece, and ordered them to withdraw, and pay Bulgaria damages.

Greece was particularly angry about this, as they had only done what Mussolini had done in Corfu in 1923. Greece did not get away with it because they had much less power in the League, and could not veto resolutions. As such, Greece faced potential escalation of sanctions, and backed down in the face of League orders.

Overall, most would argue that this was a success for the League. The League prevented conflict, sorted things out quickly, and treated the countries impartially. It is, however, striking just how unfair this was on Greece. Greece got the pointy end of the stick both times. This just reinforced how the League would work differently for stronger and weaker countries.

Overall, how successful was the League in the early 1920s?

On the surface, things looked like they were going ok for the League in the early 1920s. They had had more successes than failures, and were becoming increasingly effective in mitigation in particular.

However, it was also becoming clear that League influence beyond mitigation was weak. Furthermore, Italy had shrugged off League efforts to control them without even trying, and this exposed that strong counties in the League might be able to get away with almost anything.

This spelled danger for the League in the future.