Hitler came to power through repeated promises that he was going to undo the ‘unfairness’ of the Treaty of Versailles. He started this on Germany’s Western border (the border with France and Belgium).

In __1935 __Hitler saw his first significant success when the Saar voted to rejoin Germany. In 1936, Hitler capitalised upon this by re-militarising the Rhineland. The Saar did not break the Treaty of Versailles. The Rhineland did.

We will look at how these two events happened, how other countries reacted, and what they meant for Hitler’s power and growing tension.

The Remilitarisation of the Rhineland: 1936 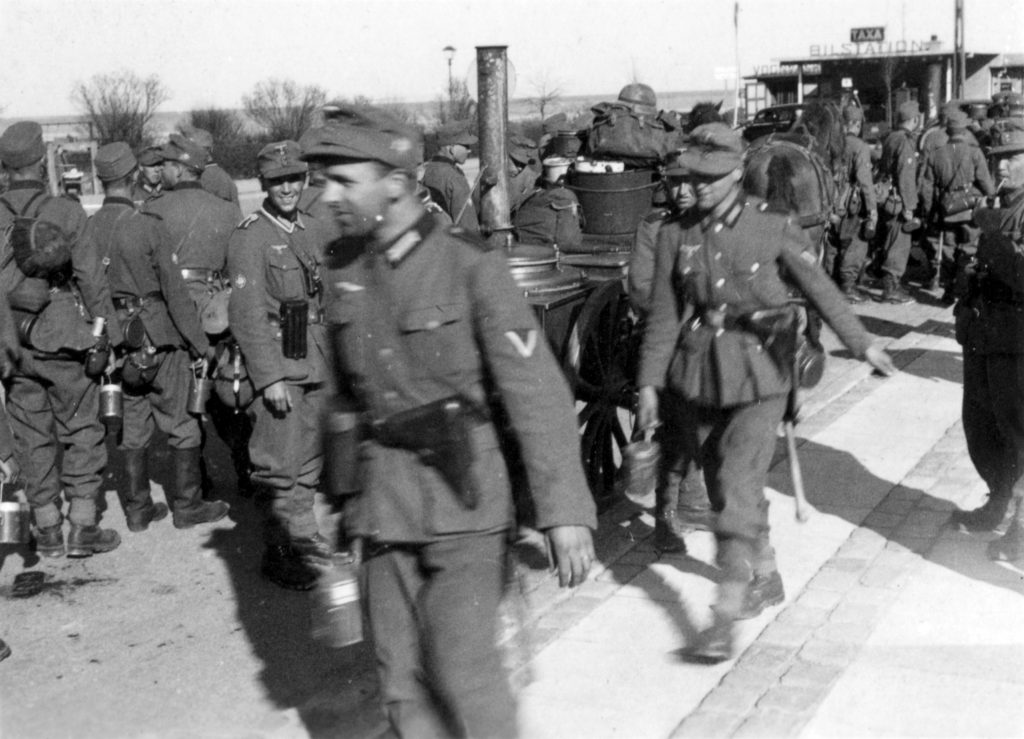 German soldiers marching into the Rhineland.

The Treaty of Versailles had not taken the Rhineland off Germany, but it had insisted that the area remain demilitarised. This meant that Germany could not send any troops into the area. This was intended to keep France safe, as German soldiers could not approach the French border.

In 1935, France and Russia signed the Franco-Soviet Pact, which agreed that either country would protect the other against a German attack. Hitler made a big deal out of this, saying that it was just the kind of alliances that had led to the First World War. He claimed that it showed how Germany was at risk from France and the U.S.S.R.. In particular, he said that it made the demilitarisation of the Rhineland unfair and unsustainable.

As a result of this, Hitler marched an army into the Rhineland. He claimed that this was the only way to be safe against France. The German army was greeted with flowers, cheers, and a great welcome from the Rhineland Germans.

Hitler knew that his army was still small and vulnerable, and he had actually ordered his soldiers to retreat if they faced even the slightest resistance. The army was sent in on foot or by bike, with no tank or air support. As such, Hitler played down the aggressive aspect of the remilitarisation, and stressed that the soldiers were there to support.

France was immediately outraged, and a little panicked; however, they felt unable to act for three main reasons:

Britain was, again, more sympathetic to Germany. They felt that Hitler was only reclaiming what was his – all he was doing was protecting his own country. Britain was also tied up in Abyssinia, and this was more military expenditure the public were happy with. Especially after the Great Depression, the British public were not supportive of expensive military ventures.

Finally, the League was also focussed and distracted by the Abyssinian Crisis. They were already failing to act against Italy, and they simply did not have the resources or the willpower to go against Hitler too. This was compounded by French inability and British unwillingness to act.

This was a further success for Hitler, both strategically and politically, and contributed significantly to growing tension with France.

Strategically, this made the German position on her Western border vastly stronger. No longer was Germany exposed in the west, and the border with France was now defended and much stronger than before. It was also a smaller border and one that was easier to defend, geographically.

Politically, it gave Hitler a further boost within Germany. The German people that Hitler was true to his word, and undoing the Treaty. Furthermore, the people in the Rhineland felt protected and finally part of full Germany. This was an all-round success, and one through which Hitler was determined to press his advantage.

This also suggested that the relationship between Britain and France was faltering. Hitler saw how France had hoped for British support, but had not received it. He wondered whether Britain might be convinced to stay neutral in any conflict with France. Britain and France also both began to re-arm. 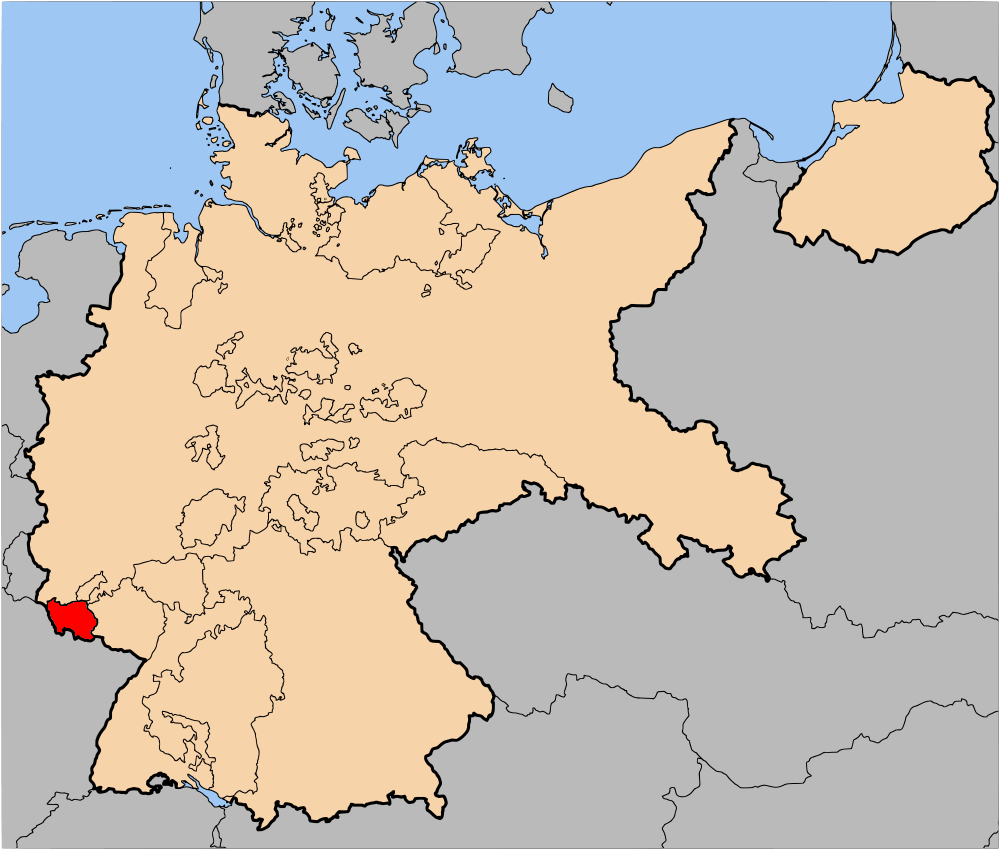 The Saar is shown in red, on the Western border of Germany. Germany had been longing to get it back ever since the Treaty gave it to the League in 1919.

The Saar had been taken under League control by the Treaty of Versailles, and had been run by the French. Germany was not happy about this, as the Saar was one of Europe’s richest coal mining areas. It was also a predominantly German area, and they felt that this totally contradicted the principle of self-determination.

The terms of the Saar mandate were that it would be controlled by the League and France for a period of 15 years. After that, there would be a plebiscite for the citizens of the area to decide which country to unite with. This plebiscite was held in 1935, and 90% of the population voted to rejoin Germany.

Britain was largely supportive, they felt that it had been unfair to take the Saar away from Germany. They also felt that France had been inefficient in managing the area, and thought that it might boost their trade with Germany. At this point, Britain was still confident of a peaceful and prosperous relationship with Germany.

France were very upset, but knew they could do nothing. They had not managed the area well, and this had all been done in accordance with principles which they themselves had helped make in 1919. As such, they protested but received little attention.

No other countries were bothered! In the grand scheme of things, this seemed a small thing which was quickly and effectively sorted out.

This was a great triumph for Hitler.

The most obvious advantage was the economic. The Saar was extremely rich, and Germany now had access to all of it. They could use the coal and steel to trade and build. They could also use to coal to fuel tanks and their secretly growing military industry. Hitler was also able to sell some of this coal to Mussolini in Italy, which was valuable in the event that Mussolini had his coal cut off through League sanctions. This brought Hitler and Mussolini closer.

This was also a huge propaganda victory for Hitler. Hitler claimed that the 90% vote showed how all German people wanted to unite under the Nazis. He argued that it showed how popular he was, and how well he was running Germany. This boosted his policy aim of Volksdeutsche (uniting all German / German-speaking people in one country).

As such, this subtly but importantly helped to build tension, particularly between France and Germany. It was clear that the balance of power was shifting – France was struggling under the effects of the Great Depression whereas Germany had a strong recovery programme. France feared that this would continue, and Germany would soon be strong enough to threaten them. France was also embarrassed, as Germany had won the plebiscite so easily.

This arguably gave Hitler the confidence to finalise plans for the Nuremberg Rearmament Rallies in March of __1935 __– only two months after the Plebiscite.