Setting the Scene – a Brief Review

After the end of the First World War, there was a rocky start to European peace in the 1920s:

This all changed in 1929, with the Stock Market Crash, and the Great Depression that followed. All of the progress of the second half of the 1920s evaporated.

On Tuesday the 4th of October, 1929, the United States Stock Market collapsed. This day became known as ‘Black Tuesday’, which started the ‘Wall Street Crash’. On this day, stocks and shares began panic selling, because people suddenly lost confidence in the Stock Market. Because the value of shares is based upon confidence and willingness to buy, this destroyed the Stock and Share economy; nobody would buy them for a decent price, so the values went down, and people and banks lost millions.

This frenzy quickly affected the banks, employment, and peoples’ savings. Over 1000 banks were failing a year between 1929 and 1932, and losing their customers’ savings. This made the Wall Street Crash spread to become the ‘Great Depression’. This was the worst period in the history of the United States economy. 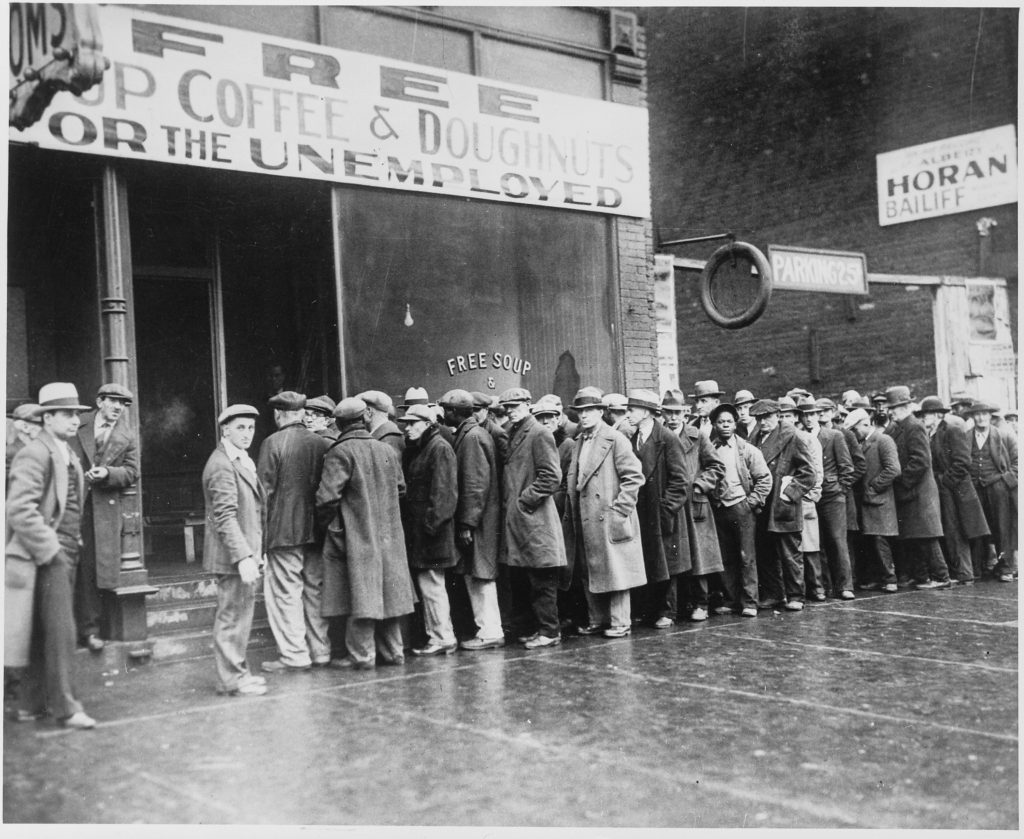 The Great Depression caused unemployment on a huge scale, damaging peoples’ confidence in their governments and the economic system.

The Great Depression Spreads to Europe

Within America the consequences of the Great Depression were severe, and this is covered in the America: Opportunity and Inequality course. But the effects weren’t limited to the United States.

The Great Depression affected Europe for the following reasons:

The U.S. and European economies were increasingly interdependent (relied on each other)

Throughout history, countries’ economies have become increasingly reliant on each other. This was certainly the case in the 20th Century – both before and during the First World War, America became highly connected to European economies.

After the War, America experienced the 1920s boom, with a surge in exports. America was selling all of the goods they were producing to Europe, along with plenty of raw materials such as cotton, wheat, and steel. As such, by 1929, European economies could not function without American trade, and without European buyers American industry would have nobody to sell to.

When the Great Depression began, this ground to a halt. American businesses were going bankrupt, European economies could no longer afford to import, and so on – the entire interconnected systems broke.

The Dawes and Young Plans

Despite America not being a part of the League, in 1924 the United States gave Germany a huge loan, and negotiated that the Reparations payments would be reduced and spaced out. This was called the Dawes Plan.

The same happened in 1929, with the Young Plan. The Young Plan was signed in August of 1929, and reduced German Reparations by around 20%. This was only 3 months before the Wall Street Crash.

When the Wall Street Crash happened, America immediately began recalling loans, and the loans to Germany were some of the first recalled. Without American financial support, Germany again felt unable to keep up with Reparations, Britain and France were also facing financial hardship so they were unwilling to wait.

Just as the U.S. was recalling loans such as the Dawes and Young Plans, so too were they demanding that Britain and France repay some of the wartime loans from the First World War. This made the economies in Britain and France even worse, and helped spread the Great Depression to Europe.

The Great Depression also had severe consequences around the rest of the world, including in Japan. We will study in the next lesson how Japan reacted to the Great depression.

The Great Depression in Germany

The Great Depression had perhaps its most devastating impact in Germany. Most strikingly, it can be significantly blamed for the rise in popularity of the Nazi party, and the eventual appointment of Hitler to be the Chancellor of Germany.

Because of the recalling of the Dawes and Young Plans, the briefly-lived ‘Weimar Renaissance’ of 1925-1929 collapsed, and people in Germany suffered a great blow to their quality of living.

The German working classes were affected by increasing unemployment (again), and the middle classes lost savings (again). This suggested to Germans that this was just another failure of the ‘weak’ Weimar Government. The Nazi rumour of the ‘November Criminals’ began to regain popularity, as people’s faith in Weimar democracy failed.

Hitler himself was a very good public speaker, and had a gift for making people believe in ‘simple answers’ to German problems. These included his vast anti-Semitism, and his plans for German economic recovery. He told everybody that the Nazis would guarantee employment for ‘anyone who wanted to work’.

Hitler also encouraged his allies, Japan and Italy, to become more aggressive. The Great Depression gave him the opportunity to rally enemies against the Allies, and Italy and Japan were desperate enough to go along with it. This caused the Manchurian and Abyssinian crises -which we will cover in the next two lessons.