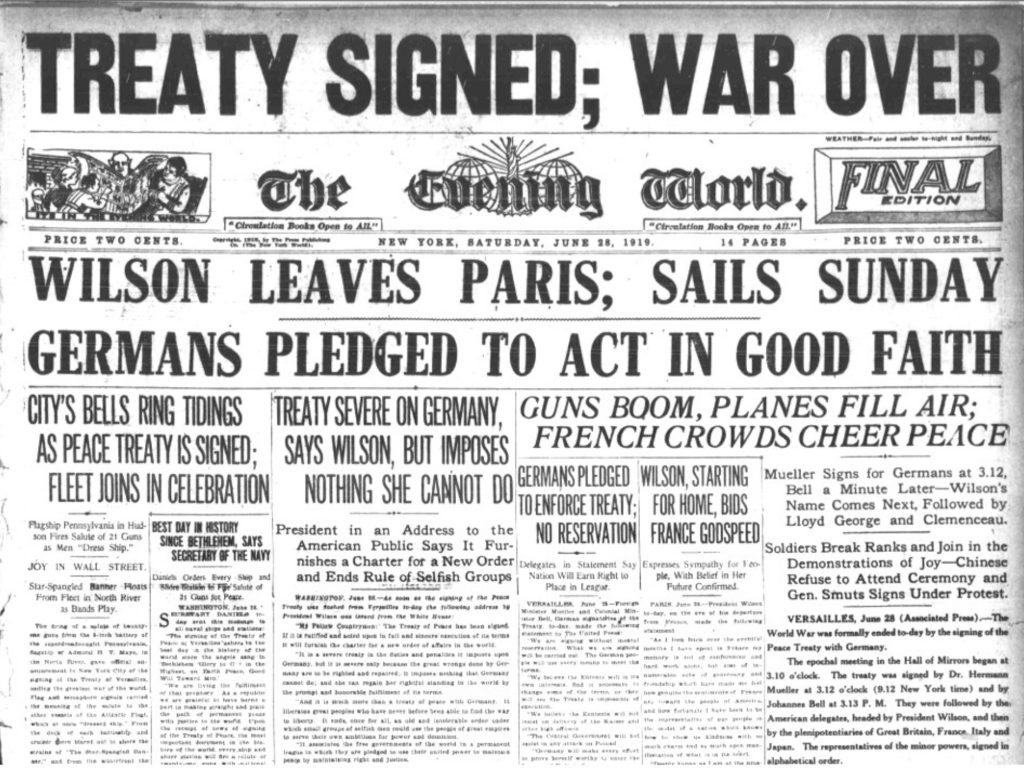 This__ __was a British newspaper on the day of the Treaty signing. Note the focus on Wilson, the judgement already that the Treaty would be ‘severe’, and the clear relief that a solution had been reached.

We are going to look at the terms of the Treaty, through the following themes:

After each term, you need to answer which of the Big Three would have been satisfied by that part of the Treaty. You can answer with more than one. The first one has been done for you. 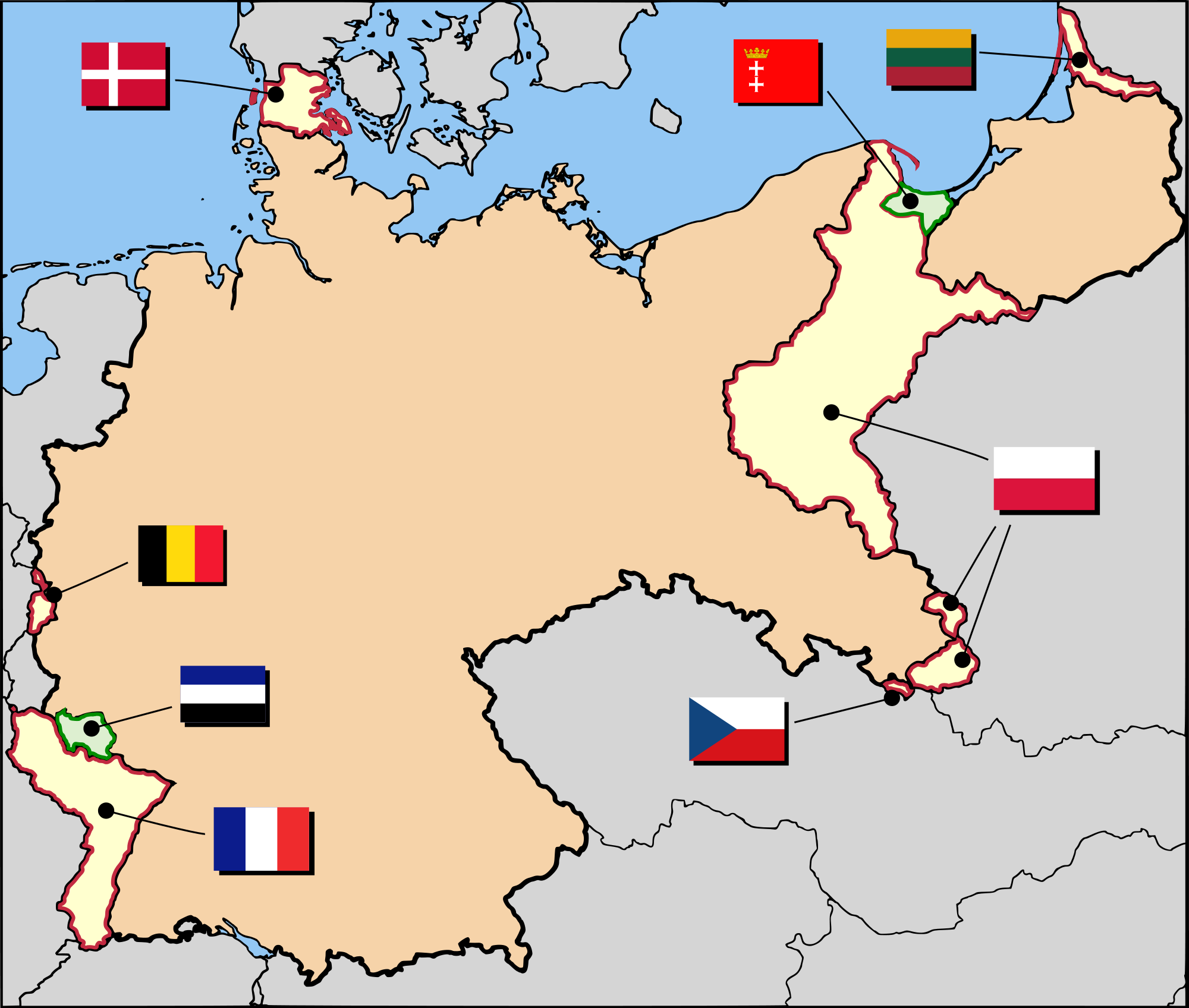 In this may you can see the territorial changes which will be explained below. The areas in lighter yellow are the areas taken away from Germany, orange is the land they kept. In green, on the right, is Danzig, the ‘Free City’, and on the right hand side of Germany the long strip of yellow is the Polish Corridor. In green, on the left, is the Saar, and on the left hand side of Germany the smaller piece of yellow is Alsace-Lorraine, given back to to France.

Germany lost a strip of land that ran right through the middle of Eastern Germany. This left two parts of Germany disconnected. This land was given to Poland, to ensure they had access to the sea. This was called the ‘Polish Corridor’. 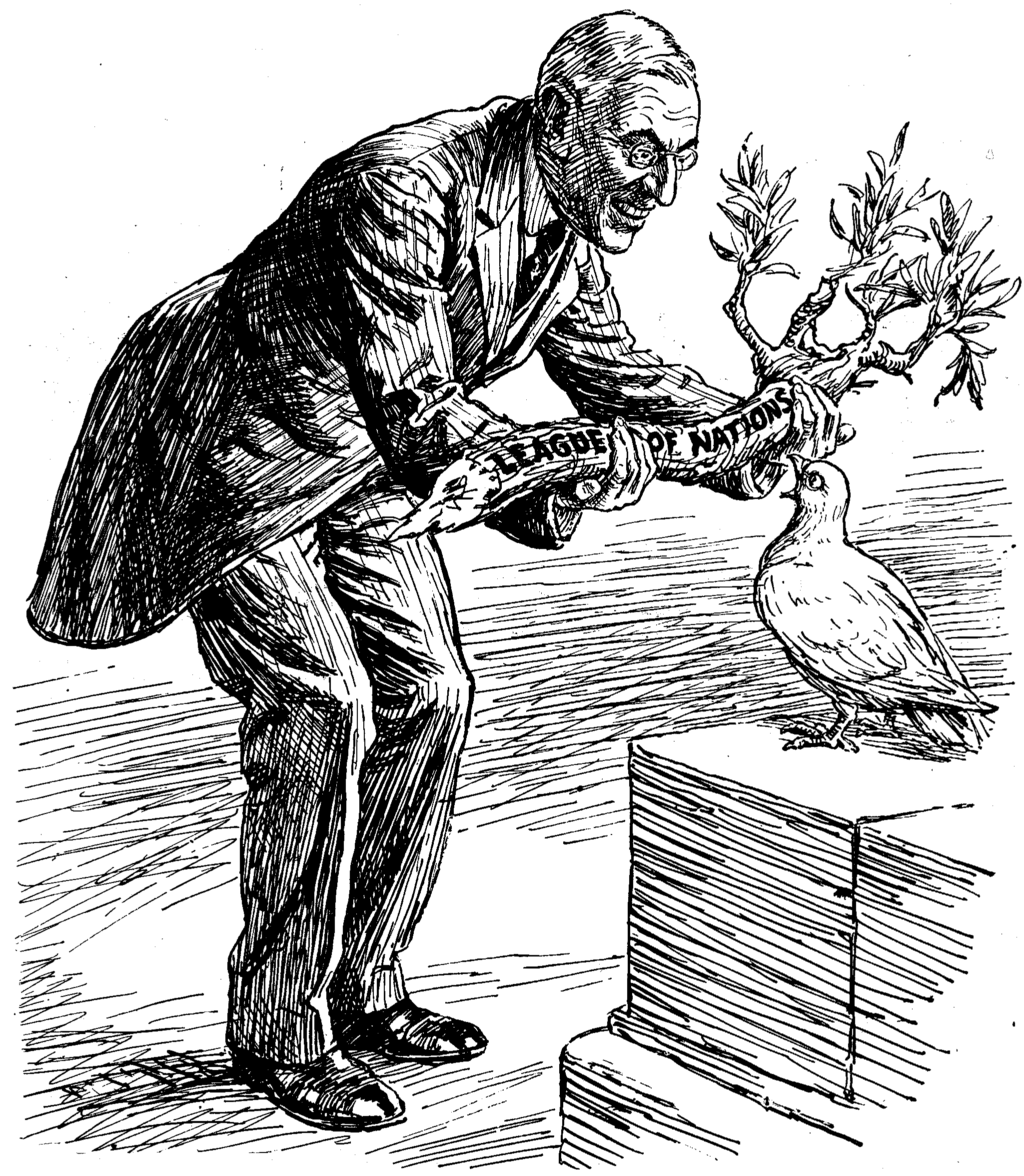 This cartoon shows one interpretation of the League - that Wilson was perhaps foolish to put all of his eggs in that one basket- A successful peace as arguably too significant to entrust to one ideau. 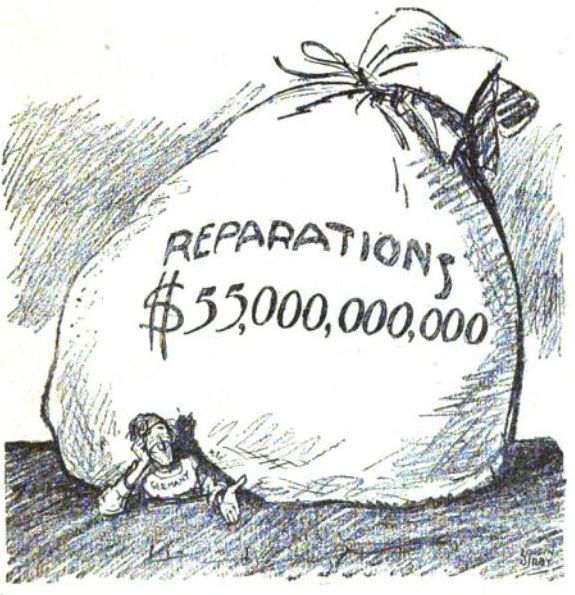 This cartoon from the time shows the amount of reparations in dollars (we recommend that you learn the £6.6 billion). The cartoon shows what many criticised the Treaty for - that the Reparations were set too high.

So who was satisfied?

Wilson was outraged, and largely dispirited, by the final Treaty. He felt that Britain and France had taken advantage of him, in order to get what they wanted. In particular, Wilson hated how harsh the Treaty was, and was sure that it would create problems in the future. Whilst he had got some parts of his 14 Points, he only got one in full: The League of Nations.

The only thing that really made Wilson happy about the Treaty was that everyone who signed it was tied into the League of Nations. Wilson hoped that this would be the way that peace was maintained, and even hoped that later on the unfair parts of the Treaty could be re-negotiated through the League.

When Wilson returned to America, to get the Treaty signed by the United States Senate, they refused. They felt that America had been taken advantage of, and that the League would cost too much. Furthermore, after seeing how many problems there were in the Treaty, America was no longer interested in getting involved in Europe as they thought they would have to pay and send men to clean up European issues. 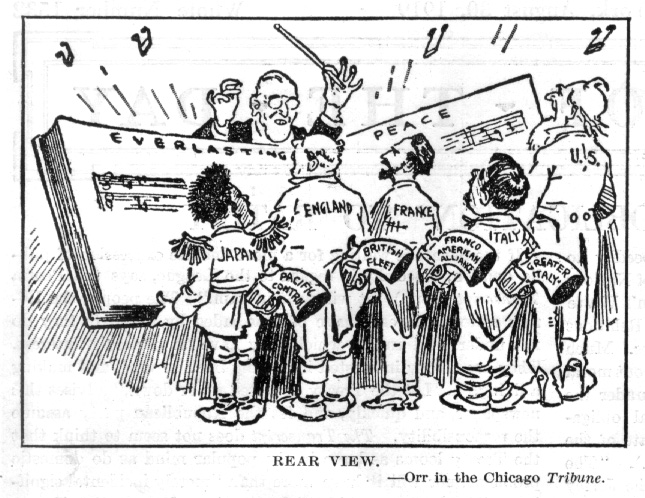 T__his cartoon sums up quite nicely how many Americans felt about the attitudes of other countries at the Treaty of Versailles - that they all had ulterior motives that they were ‘hiding behind their backs’.

**This leads to the first long-term problem that was already emerging in 1919: American withdrawal from Europe. We will cover the other two in future lessons.

America had been a pivotal factor in making peace, and Britain and France had depended upon America to stay to keep the balance of power in Europe. Without America, a bankrupt Britain and France were left to fund and run the League, and keep peace in Europe. This would only lead to more problems.

Clemenceau – In the Middle

There were many things about the Treaty which Clemenceau greatly disliked, and the French people disliked even more. Most obviously, Germany was still a country. This annoyed Clemenceau as he had fought to break Germany up. Similarly, Clemenceau was annoyed not to have control over the Saar or Rhineland, and was angry that Germany still had some form of military. Finally, Clemenceau felt that the Reparations bill was too small, and would not cover French damages or punish Germany enough.

It is important to remember that France had lost the most during the War, therefore it makes sense that France wanted the most from Germany, and would feel the most let-down by the Treaty.

On the other hand, Clemenceau was happy that there were to be some (substantial) Reparations. Furthermore, they were pleased to get Alsace-Lorraine back, and to have the Rhineland demilitarised. Furthermore, France were happy to be part of the League of Nations, as this would bind America to help France if Germany ever became a problem again.

Clemenceau became significantly more distressed when the U.S. would not sign the Treaty – he had been banking on American support in the LoN, and had compromised on several other factors to try and keep America happy. He felt that he could have pushed harder for French interest if he knew America would leave anyway.

In general, Britain got the majority of what they wanted – largely because they were often in between French and American opinions, so acted as a mediator. In particular, Britain was pleased that Germany would still be economically strong enough to trade but were also paying Reparations (even though very little damage was done in Britain itself). Similarly, Britain was pleased to get German colonies, along with control over those trade routes. Furthermore, Britain was happy that the Germany navy was vastly reduced. Finally, Britain was relieved that all war guilt was assigned to Germany.

Whilst the British public were pleased, Lloyd-George was less so. He privately feared that the Treaty was too harsh, and would result in another war in 25 years. (He was only 5 years wrong). Lloyd-George also worried that the Polish corridor was a bad idea, and the separation of so many German people from the country would create anger and a desire for revenge.

How much was the German Reparations bill?
6.6 billion
Which Article blamed Germany for the War, and what was its other name?
Your answer should include: Article 231 / War Guilt Clause
How many men was the German army limited to?
100000
Who (in reality) got German colonies?
Your answer should include: Britain / France
What was Germany not allowed to have with Austria?
Anschluss
Who was (according to most opinions) the most satisfied with Treaty of Versailles?
Lloyd-George