As we have learned in the previous lesson, poverty was an increasing, and serious, problem for Elizabethan England. Elizabeth was eventually convinced that her government had a responsibility to address poverty, although this took some time, and was rolled out locally before the national government got involved.

Measures for dealing with the poor before Elizabeth’s reign

With these laws, we can see that the approach to poverty was inconsistent. Furthermore, even in the nicest law, which encouraged people to give to the poor, there was no actual action from the government.

It took some time, indeed her Poor Law was only passed towards the very end of her reign, but Elizabeth was the first monarch in England to change this. 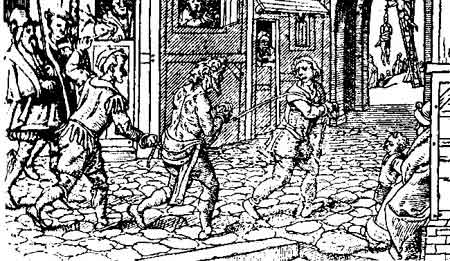 This shows a poor person being led through the city on a leash - another punishment of poor people and beggars.

Initial Attempts to Help the Poor

Early in her reign, Elizabeth carried out a full ‘Recoinage’ which had been planned by her sister Mary. Queen Elizabeth I’s father, King Henry VIII, had reduced the purity of English silver and gold coins to fund foreign wars and his extravagant lifestyle. Many of Henry VIII’s ‘debased’ silver coins actually contained more cheap metal such as copper than silver. As the coins wore down the copper shone through his image, earning him the nickname ‘Old Coppernose’.

Essentially, this meant that English money was getting less valuable – this is what we call inflation. In particular, it was harder for English merchants to buy and sell abroad. As a result, companies had to fire workers and economic conditions struggled.

To put things right, Elizabeth I ordered the ‘Recoinage’. This meant that all old coins were re-made into new, purercoins. Elizabeth’s new coins were made of ‘fine’ silver and gold once more. This slowed down the rate of inflation which meant that wages would be fairer. 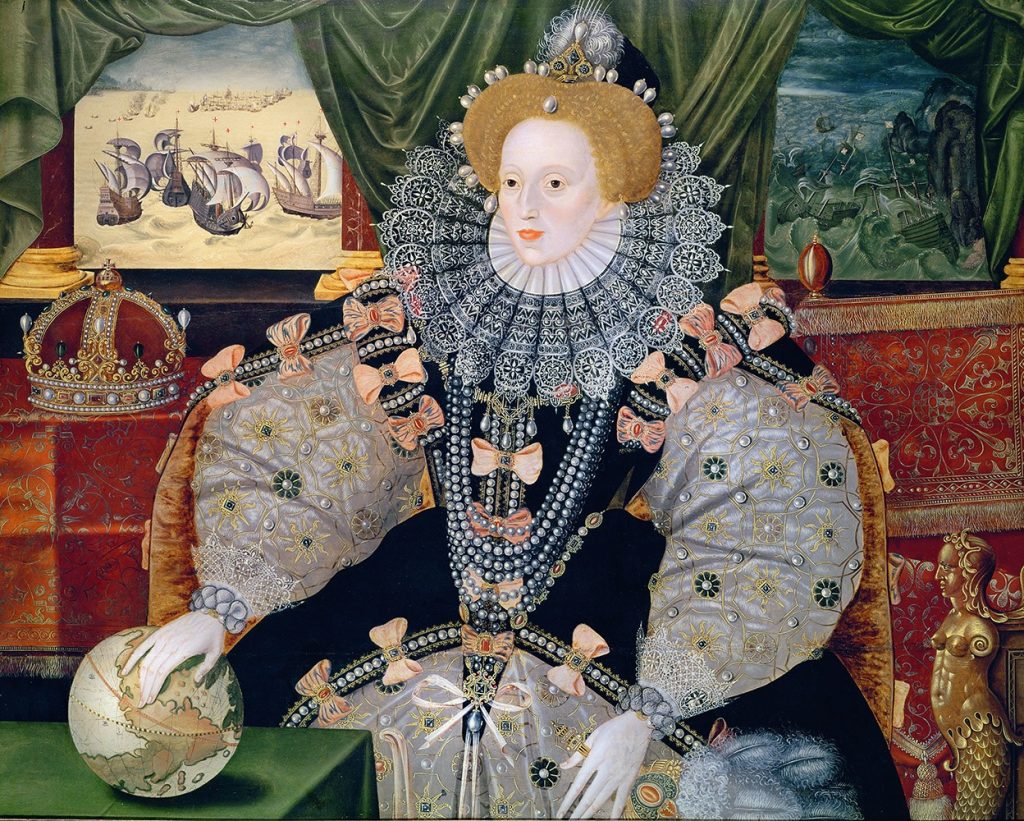 Elizabeth was much less wasteful with money than her predecessors, particularly Henry. She was still a monarch, though, and so lived in luxury and splendour. She worried that normal people would see her portraits and progresses and begin to rebel, because they themselves lived in poverty.

How did the Government Help the Poor in Elizabethan England?

Elizabeth believed that she had more important issues to focus on than helping the poor. She and her government were reluctant to accept that poverty was a national problem, and that the government were responsible for dealing with it. The government introduced various measures to try to solve the poverty problem. There were initial attempts to help the poor, before the Poor Law was introduced.

Measures for Dealing with the Poor before Elizabeth’s Reign

Town councils, such as in Northwich which was Britain’s second largest city in Elizabethan England, and London, the capital city, introduced local measures to try and deal with poverty.

The workhouses were an important step forwards, and they also helped to boost the wider economy. In putting the unemployed and homeless to work, they built roads and cleaned the streets (this also helped to make people healthier). This helped England’s growing trade potential, and made it easier for the gentry to operate their increasingly profitable businesses. As such, employment also rose in traditional industries.

In London, several hospitals were established

These helped the poor to find employment and provided sanctity for those who were too ill or sick to work.

The government was impressed by these local measures and gradually realised that a national system was needed to tackle the problem of poverty across the country. England was suffering and as so many were in poverty. Elizabeth and her government were worried that this could lead to rebellion.

A Poor Law was passed in 1597 which was later amended in 1601. The full title was: The Act For The Relief Of The Poor. We generally refer to the 1601 amendment as the full Poor Law.

What did the Poor Law involve?

Although Charitable giving was encouraged, the new Poor Law stated that everyone had to pay a small new tax, towards a local ‘Poor Rate’. People who refused to pay this tax could be fined or imprisoned. This local tax would pay towards parish officials, the setting up of the workhouses and the payment relief to the deserving poor.

Each Parish Appointed ’Overseers of the Poor’

There was still a belief that there was a group of poor who were just lazy and chose not to work. They were strictly punished.

This shows that whilst there was an improvement in the treatment of the poor, there were still very harsh measures which remained. Some Parishes acted particularly harshly, and treated the majority of their poor as ‘Idle poor’.

Why Was the Poor Law an Important Milestone?

For the first time, the government in England had taken direct responsibility for the poor. This had filled the gap that had been left when Henry closed the monasteries a generation earlier.

A sign of its success could be that the Poor Law lasted. It was used for 200 years until 1834.

The reason behind the Poor Law was not to be kind and help the poor, it was more of a political reason. Elizabeth worried that if people were poor and unhappy they would cause a rebellion. Helping the poor would keep people onside and prevent this. No rebellion was caused by poverty in Elizabeth’s reign so it seemed that they achieved their aim. Some have argued that the Poor Law focused too much on punishment rather than helping people.