Design of the Theatres

The theatres were made up of an uncovered circular pit with surrounding covered galleries where people could sit. The most expensive, and highest status, seats were at the top. To sit in one of the highest balcony seats was a sign of great wealth and honour. Elizabeth herself would occasionally commandeer the best seats.

There was no artificial lighting, so plays had to be staged in the afternoon, with a flag above the theatre signalling a performance. There would be a trumpet played to show that the play was about to start. A different play would be performed each day.

Women were not allowed to perform, so boys played female roles and the conditions faced by actors were difficult. Behind the stage was a building called the ‘tiring house’ where the actors would dress in their costumes and collect their props.

There are several theatres today which are named after these actors! 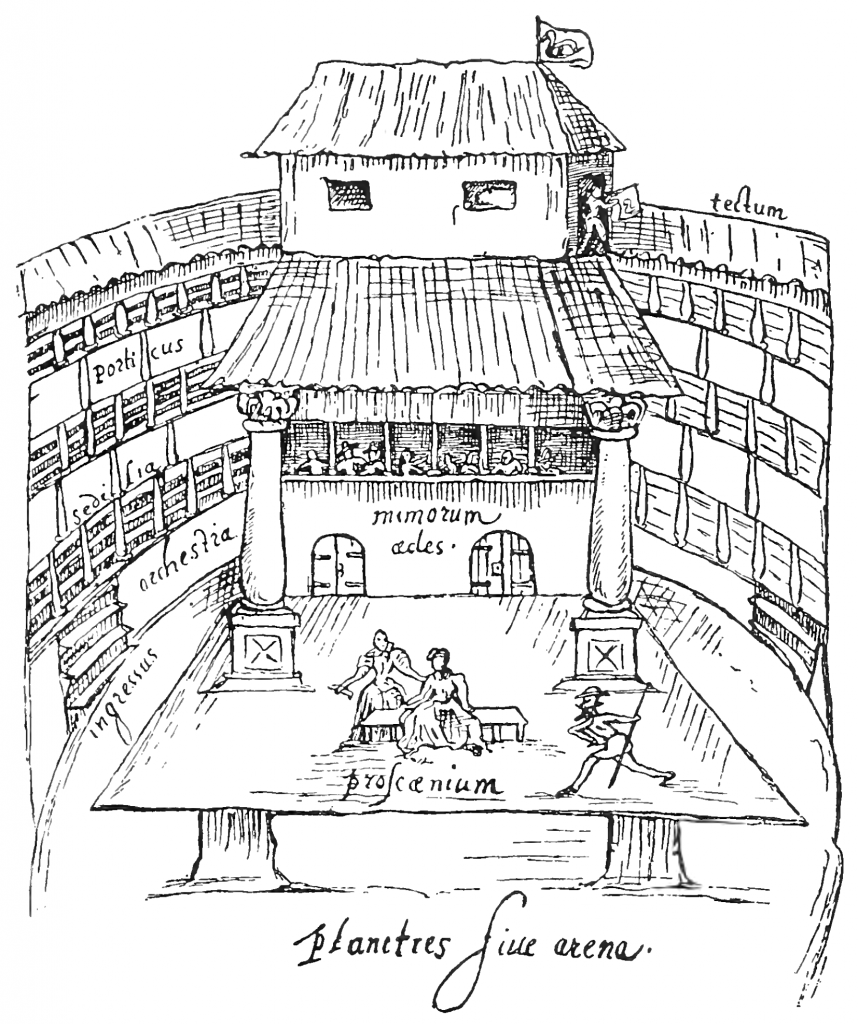 This picture shows another take on the design of an Elizabethan theatre. 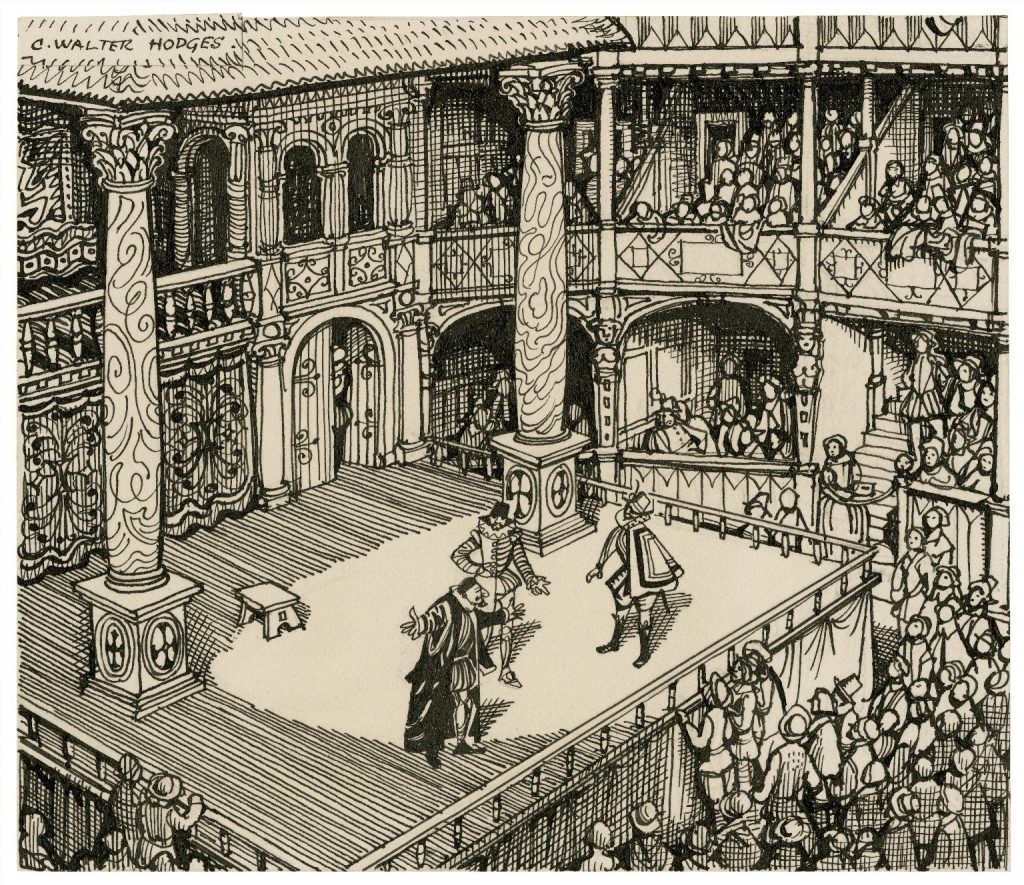 An illustration of what an Elizabethan theatre might have looked like. Note the standing crowds at the bottom, and the viewing areas rising up. These are relevant to the design and hierarchy sections later. The theatre would have been open air.

When Elizabeth became Queen, there were no theatres in the country. ‘Mystery’ and ‘Miracle’ plays, usually based around stories from the bible and the lives of Saints had been popular since the Middle Ages, but they were performed on temporary platforms in open spaces such as market squares and inn yards as there were no permanent theatres.

Groups of actors would tour the country to perform, but the government did not like them. Actors were thought to be a threat to law and order and acting was not thought to be a respectable profession.

Actors were thought of as no more than beggars! In 1572 Parliament passes a law which said that actors were to be punished as Vagabonds. Puritans also strongly disapproved of the theatre on religious grounds, associating it with the Ancient Romans and thinking it was the work of the devil. When a great earthquake struck the south of England in 1580, many considered it a sign of God’s anger at the theatre!

A new law in 1572 required all bands of actors to be licensed. The law was brought in because of government suspicion but had an unexpected effect. It encouraged the actor companies to organise themselves, and four years later the first purpose built London theatre opened. It was called ‘The theatre’ and was very successful, so lots of other groups of actors began to set up their own.

The Growth of Theatre

Theatres that opened after the success of the first one:

The Globe was Shakespeare’s theatre.

By the end of Elizabeth’s reign, there were seven major theatres and 40 companies of actors.

As a result of the authorities’ opposition to them, the theatres were located outside of city walls. Most were in London, in the Bankside district of Southwalk, on the south bank of the Thames. The area had a bad reputation, with a lot of taverns, bear baiting rings, pickpockets and brothels. Although crime was common in the area, the performances were exciting and a visit to the theatre was not just about the play. Theatre goers could also purchase refreshments, such as meat pies, fruit, nuts, beer and wine and such visits allowed people to socialise, show off, to network for business purposes, and to meet future husbands and wives. 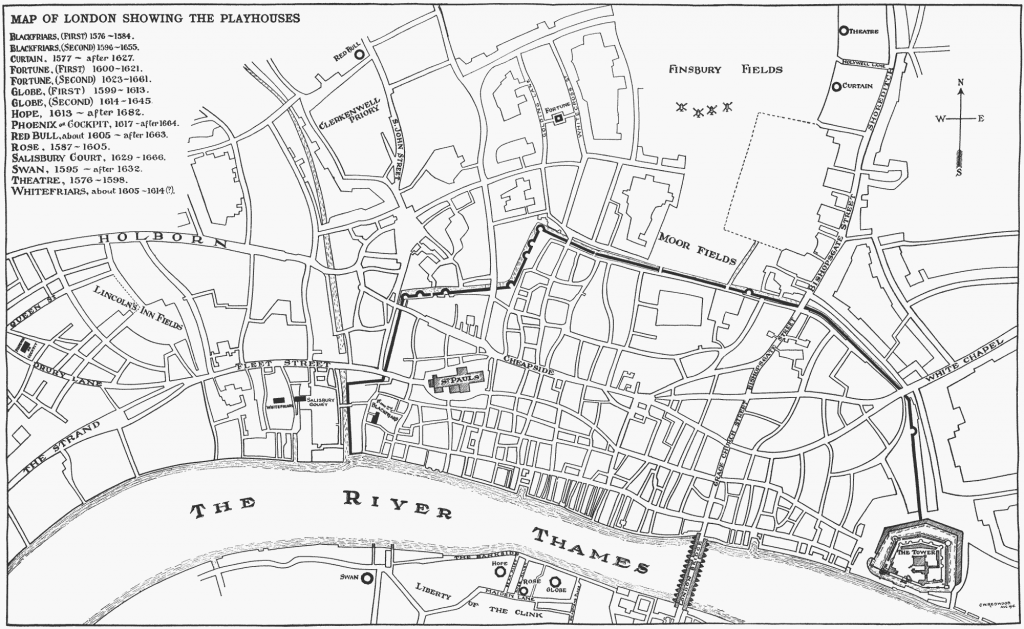 This map of London shows where the theatres were beginning to appear, and when they were built. This is not the same area where most theatres are now. You can see just how many theatres were built during, or just after, Elizabeth’s reign of 1558 - 1603.

Who Attended the Theatre?

Theatres were very popular and cheap entrance fees meant that they were affordable to everyone. Audiences came from all groups of society, ranging from poor craftsmen, to merchants, to wealthy nobles. However, the rigid social structure was upheld within the theatre. A day at the theatre was an exciting day out for all social classes. For the poorest it meant an opportunity to drink, heckle the actors, and was a cheap afternoon’s entertainment. They also got to socialise with other classes.

Being a patron of a theatre company was also a good way for the nobility or Gentry to show how cultured they were and was a way to please the queen. Plays often focused on the successes of the Tudors to gain the favour of the Queen. This could be why the Queen and government changed attitudes towards the theatre. It could provide distractions for people in overcrowded areas, making rebellion less likely. The plays often emphasised the Great Chain of Being which reinforced the ideas of the government of peoples place in society.

Cheapest tickets: These would cost a penny and you would have to stand in the ‘pit’ or the ‘yard’. This would be in noisy and smelly conditions and you would be exposed to the weather. They were known as ‘groundlings’. The groundlings were often badly behaved and would throw food at the unpopular characters in the play.

Three tiered galleries: These were two or three pennies and these could seat up to 2000 spectators. The galleries had comfortable seating and a thatched roof provided protection from the weather. For an extra penny you could pay for a cushion.

Lord’s Rooms: This is where the richest members of the audience would sit, above the stage or even on the stage itself.

The most famous Elizabethan playwright was William Shakespeare and his plays were hugely successful. The themes in his plays reflected the interests of Elizabethan people; violence, romance, magic, the ancient world, exploration, and patriotism.

There was not much scenery in the plays but each play held the attention of the audience through skilful characterisation, intelligent dialogue, clever dramatic devices, music, varied subplots and basic special effects. Trapdoors in the stage allowed dramatic entrances and exits. An area of the theatre above the stage was called ‘The Heavens’ and this area directed the special effects. ‘The Hut’ provided storage space.

Cannon balls were rolled to make the sound of thunder, such as in the opening scene of Shakespeare’s Macbeth. Pig’s bladders were filled with blood and used for dramatic stabbing scenes, such as in Romeo and Juliet! 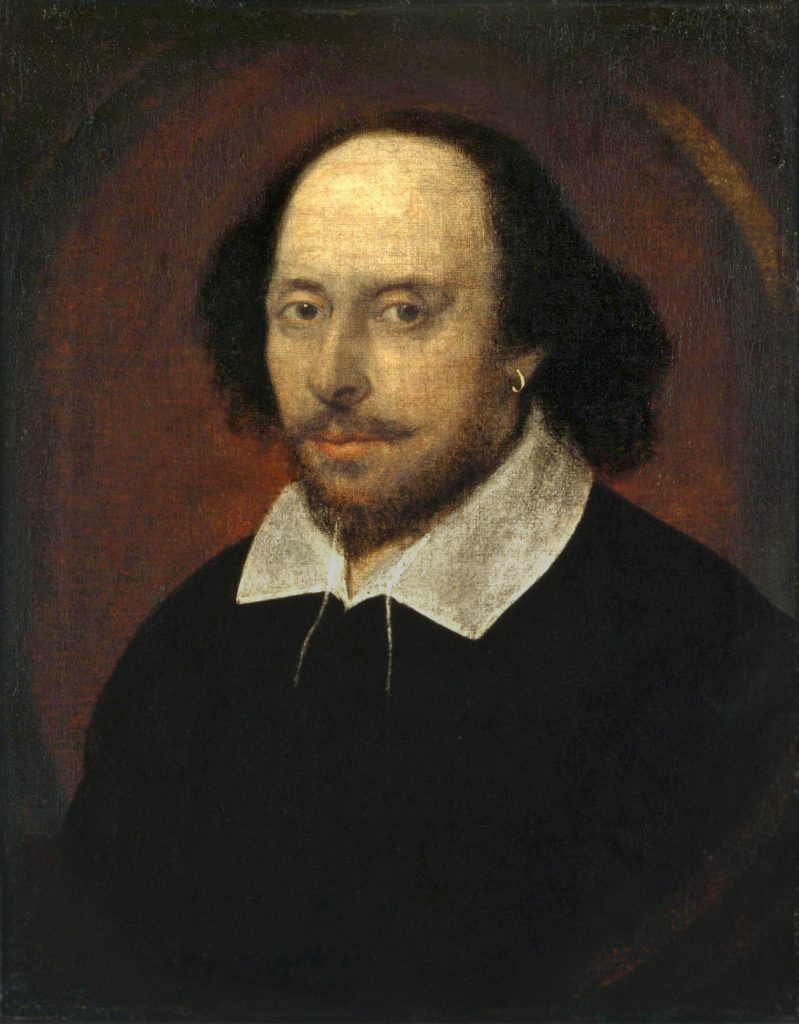 Shakespeare was one of the most influential playwrights of the period. He worked with Elizabeth a lot, and included quite a bit of her propaganda in his plays. This most famously included Richard III.

How did Elizabeth use the theatre as a form of Propaganda?

By the end of Elizabeth’s reign, London was busy and overcrowded, and its population was 200,000 people – four times what it had been at the start of the Tudor era. Plays provided entertainment for the growing city.

As such, the government started to see Theatre as an opportunity for Propaganda. They could influence the performances to fit in with the way Elizabeth and her government wanted the people to think, and what they wanted them to believe. They encouraged plays with supportive messages, and banned plays which had messages they did not approve of.

It also would encourage social stability, as people would be entertained and have a leisure activity that was affordable to all. This in theory meant that if people were satisfied with their social lives, meant that they would not want to cause disruption. This helped address the problems of poverty and overcrowding.

This was related to how patronage worked in the courts, but slightly different.

Elizabeth herself never visited a public theatre, but she enjoyed plays and had groups perform at her Court. She even allowed one group of actors to call themselves The Queen’s Company.

Some plays contained subtle political messages that were designed to flatter Elizabeth and support her position. They were also carefully censored so as to not be too controversial or to make any obvious for the politicians of the time.

The Great Chain of Being

The Elizabethans believed that everyone and everything had its own place in a Divine hierarchy, called the ‘Great Chain of Being.’ This was a social and cultural hierarchy. There was a strong belief that this ordering of the universe should not be changed as this would cause chaos. Shakespeare’s plays often emphasise hierarchy and orderliness, and the triumph of good over evil is a common moral. This suited Elizabeth and her government very well.

Portrayal of the Tudor’s and their Legacy

Shakespeare’s play Richard III, for example, presented the Tudors in a very favourable way. It focused on the later stages of War of the Roses, showing Elizabeth’s Grandfather, the first Tudor King. Henry VII to be the saviour of the nation. His enemy, Richard III, is shown as a hunchback, an evil monster who brutally murdered his own nephews and many others. The Tudors were shown in the play to be courageous and to have fought for the good of England against all odds.