The Nervous System: This is the body’s primary internal communication system, made up of cells. It responds to environmental stimuli and co-ordinates the work of the body’s various organs and cells. There are two sub-systems, which are the central nervous system (CNS), consisting of the brain and spinal cord, which are involved with complex commands and decisions, and the peripheral nervous system (PNS), which is responsible for transmitting messages to and from the CNS through neurons (nerve cells). The PNS can also be sub-divided into the autonomic nervous system (ANS), governing functions such as heart rate and the stress response, and the somatic nervous system (SNS), controlling muscle movement.

The Endocrine System: This instructs various glands (for example, the thyroid gland) to release various hormones which travel round the body. Hormones are chemical messengers which travel to particular organs and have powerful effects. Thyroxine, produced by the thyroid gland, has various effects, including increasing heart rate and raising metabolic rate. The pituitary gland is the most important gland, as it controls the release of hormones from other glands in the body.

Fight or Flight Response: The endocrine system and the ANS often work together. For example, when a person perceives a situation as stressful, the sympathetic branch of the ANS is triggered. The stress hormone adrenaline is released in response, leading to physiological changes (increased heart rate, sweating, and so on- the ‘fight or flight’ response). This state of arousal in the system is known as the ‘sympathetic’ state. Once the perceived stressor passes, the ‘parasympathetic’ branch of the ANS returns the body to normal, reducing the effects and activity of the sympathetic branch.

Neurons: These are nerve cells which transmit messages chemically and electrically. Most are located in the brain (80%). There are three types:

Neurons vary in size, but have the same structure. They have a cell body (soma), containing genetic material, and branches (dendrites) which carry nerve impulses to the soma. The axon carries impulses away from the soma. The axon is covered in a protective layer known as the myelin sheath, which speeds up transmission. This effect is achieved by making the impulse ‘jump’ between gaps in the myelin sheath- these gaps are known as the nodes of Ranvier. At the end of the neuron are terminal buttons which allow for communication with adjacent neurons- the gap between them is called the synapse. When in an inactive, resting state, neurons have a negative electrical charge. When activated by a stimulus, the neuron gets a short positive charge that creates an electrical impulse (‘action potential’), which then travels down the axon.

Synaptic transmission: Messages are transmitted electrically within neurons, and chemically between them. The communication between neurons takes place across synapses. A message reaches the end of one neuron (the pre-synaptic cell), triggering the release of neurotransmitters from vesicles (sacs) located at the terminal button. These chemicals are released into the synapse, and are taken up by the next neuron (the post-synaptic cell). Excess neurotransmitter is reabsorbed by the pre-synaptic cell. The chemical message is converted into an electrical one, and is sent along the dendrites towards the soma of the neuron. The process of transmission from one neuron to another is known as a neural network. Each neurotransmitter has a particular structure, and fits perfectly into particular receptors on the post-synaptic cell. They have different effects, either excitation (increasing the post-synaptic neuron’s positive charge and the likelihood of the message being passed on) or inhibition (increasing the post-synaptic neuron’s negative charge and decreasing the likelihood of the message being passed on). For example, serotonin has an inhibitory effect, and adrenaline an excitatory effect.

Use your knowledge of synaptic transmission to explain how SSRIs work. (4 marks- 1-2 paragraphs)
Your answer should include: Serotonin / Reuptake / Synapse / Inhibitory

Localisation of Function in the Brain

Localisation: Scientists such as Broca and Wernicke discovered in the 19th century that, contrary to the previous explanations, specific areas of the brain are associated with particular functions and behaviours. Prior to this, the holistic theory suggested that the brain worked as a whole to undertake all tasks, activities and behaviours.

Hemispheres and the cerebral cortex: The two ‘halves’ of the brain are known as hemispheres. Generally speaking, the left hemisphere is responsible for controlling the actions of the right-hand side of the body, and the right hemisphere control the left-hand side of the body. The cerebral cortex is the 3mm thick covering of the brain, and is much more developed in humans than in other animals.

Areas of the brain: The brain is divided into four areas- the frontal lobe, the parietal lobe, the temporal lobe and the occipital lobe. Each area is linked with different functions:

Damage to any of these areas will result in reduced specific functioning. For example, damage to the auditory area leads to possible hearing loss.

Language area: The areas mentioned above are present in both hemispheres. The language area seems to only exist in the left hemisphere (for most people). Paul Broca (a surgeon) identified an area in the left frontal lobe known as Broca’s area, which is responsible for speech production. Damage to this leads to a lack of ability to speak fluently and clearly- a condition known as Broca’s aphasia. An extreme example of this was one of Broca’s patients, who could only say the word ‘tan’. Karl Wernicke identified a region in the left temporal lobe known as Wernicke’s area, which is responsible for language comprehension. When damaged, a person may say nonsense words. This condition is known as Wernicke’s aphasia. 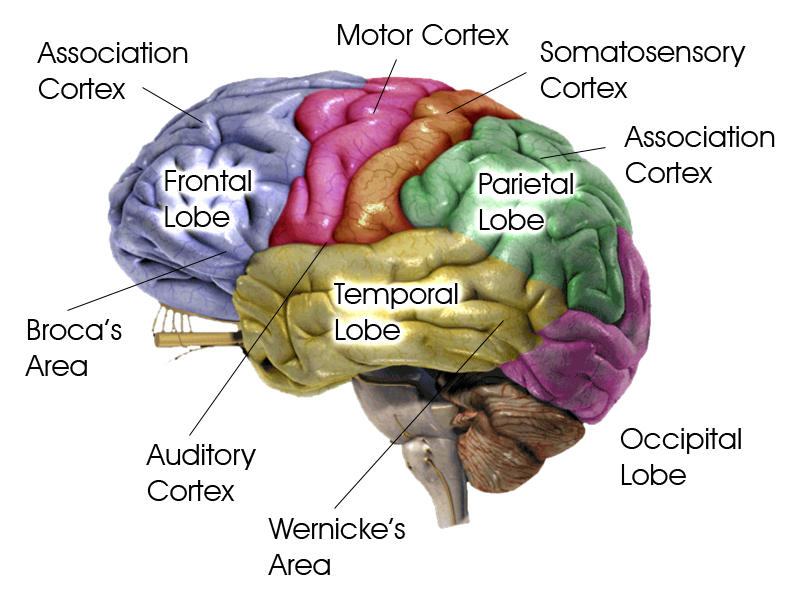 Brain plasticity: This is the ability of the brain to make new neural connections and amend existing connections. During childhood, new connections are made, and ones that are unused will be deleted. It was originally thought that this process only takes place in childhood, as the brain grows and develops. However, there is evidence that the process can happen in adulthood as well as a result of learning and experiences.

Maguire et al (2000) studied London taxi drivers. They found that their brains had a much larger posterior hippocampus than a matched control group. This is possibly due to the fact that the drivers need to pass ‘The Knowledge’- a comprehensive test of London’s streets and traffic routes. The posterior hippocampus is involved in spatial navigational skills. The longer the participant had been a London taxi driver, the bigger this area of their brains. This suggests that parts of the brain will develop according to experience.

Functional recovery after trauma: Following a trauma such as a stroke or physical damage to the brain, unaffected areas are able to compensate for the injury by ‘taking over’ the functions of the damaged areas. This process appears to happen quickly at first, before slowing down. Synaptic connections close to the damaged area are re-routed to avoid it, and neural pathways not previously used are ‘unlocked’. Changes in the brain during this process include axonal sprouting, where new nerve endings grow to make connections with undamaged nerves; reformation of blood cells; and recruitment of homologous areas on the opposite side of the brain, where the equivalent area of the opposite hemisphere takes over the functions of its counterpart in the other hemisphere.

Using your knowledge of plasticity and functional recovery, explain how Becky was able to recover from the procedure. (6 marks- 2-3 paragraphs)
Your answer should include: Neural / Connections / Experience / Trauma