Composition of the Judiciary

The UK court structure is as follows: 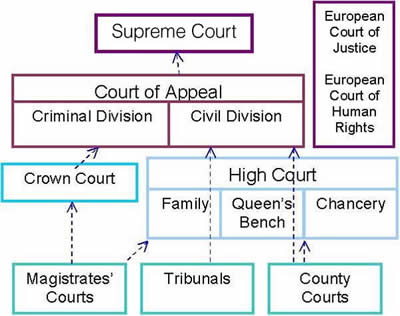 The function of the judiciary is to interpret laws. Judges have a variety of roles, for example presiding over court proceedings to ensure fair trials, interpreting and applying the law (explaining what the law means and what is lawful), enforcing common law (by using previous judgements on similar cases as a guide), deciding on length of sentences, and chairing public inquiries (investigations into events). Senior judges are appointed through the 15-member Judicial Appointments Commission (created in 2005 by the Constitutional Reform Act), an independent body, although the Lord Chancellor formally approves appointments.

The Supreme Court was established in the 2005 Constitutional Reform Act. The aim was to increase the independence of the judiciary from the government- previously, the highest court of appeal in the UK was the Law Lords, who were senior judges also members of the House of Lords. The role of the Lord Chancellor, a government position, was also amended by the Act. Previously, the Lord Chancellor was a cabinet minister (justice secretary), but also the head of the judiciary responsible for appointing judges. This second role was removed from the Lord Chancellor in 2005.

The Supreme Court was opened in 2009, and serves as the final court of appeal in the UK (including all of the regions of the UK). It hears appeals on points of law and matters of legal and constitutional importance. It can make decisions relating to whether government institutions have acted within their powers, including devolved bodies, and can use judicial review to assess whether the government has acted in accordance with existing law. An example of a case heard by the Supreme Court was in 2016-17, when Gina Miller, a businesswoman, argued that the Prime Minister did not have the right to trigger Article 50 (the formal notice of Britain’s exit from the EU) without the consultation of Parliament. The Court found in Miller’s favour, and Parliament voted to trigger Article 50 in 2017.

The Supreme Court is made up of 12 members. Cases are usually heard by 5-9 judges (depending on the importance of the case) and always an odd number so a majority verdict can be reached. The most senior judge is known as the President (for example, Lord Neuberger), and the majority of judges are white males, which has attracted criticism- in 2017 there was only one female judge on the court. The first members were the former Law Lords (who were removed from the House of Lords) and will usually have served as a senior judge for 2 years.

Appointments to the Supreme Court are made by an independent selection commission, who recommend a candidate who is then approved or rejected by the Lord Chancellor, who cannot indefinitely reject candidates.

Judicial neutrality: refers to the absence of any form of partisanship or politically biased judgements- a refusal to ‘take sides’ in cases. In reality, it is impossible to be politically ‘neutral’- so judges must not let their own views and beliefs affect their professional behaviour. In the Supreme Court, judges cannot sit in cases involving an associate or family member, and must avoid open political activity.

Criticisms have been made of the extent to which the Supreme Court is politically neutral. Due to their narrow background (white, male, privately-educated) judges have been argued to have a conservative bias, and possibly a bias against women, ethnic minorities and poorer people, as they are less likely to consider their needs and empathise with them. In 2015, Lady Hale (the only female judge) pointed out that since her appointment, 13 judges had been appointed, who were all male, all white, all bar two privately educated, and all bar two Oxbridge-educated. In addition, there has been a rise in judicial activism, especially relating to human rights and civil liberties case, where judges openly criticise the actions of government.

Judicial independence: this is the principle that the actions and decisions of judges should not be influenced by pressure from other branches of government. This is maintained in a few ways, for example:

Criticisms have been make of the extent to which the judiciary is independent from political pressure. Concerns were raised by Lord Phillips in 2011 about the possible effects of spending cuts on the court system as part of wider ‘austerity’ policies. In addition, the Supreme Court was heavily criticised by some ministers (backed up by the right-wing press) following the ruling that Article 50 must be triggered by Parliament and not the government, possibly putting pressure on future decisions of judges. However, it remains to be seen whether public criticism of judge’s decisions will have much of an effect.

Judicial review: this is the judiciary’s ability to review whether the actions of government are compatible with existing laws. This is often used in relation to human rights issues. If a court finds that a government action or law conflicts with the principles of the Human Rights Act, it issues a ‘declaration of incompatibility’. Following this, the government is expected to modify their action or legislation. The same is true for EU laws, although in both of these examples the court cannot compel a government to act. The court may decide through judicial review that a government minister or institution has acted beyond the remit of their power- this is known as ‘ultra vires’ (‘beyond the power’). For example, in 2010 the court ruled that the government had not acted lawfully when insisting that convicted sex offenders should be registered with the police for life. This breached the offenders’ human rights, so instead they should be given the right to appeal against the registration after 15 years since leaving prison. Sometimes, the court finds in the government’s favour. For example, in 2014, the court dismissed an appeal by campaigners against the construction of the HS2 high-speed rail link from London to Birmingham, on the grounds that Parliament had not reached a final decision on the project.

Is the Supreme Court and judiciary influential, and does it effectively challenge the government?

Arguments in favour include: