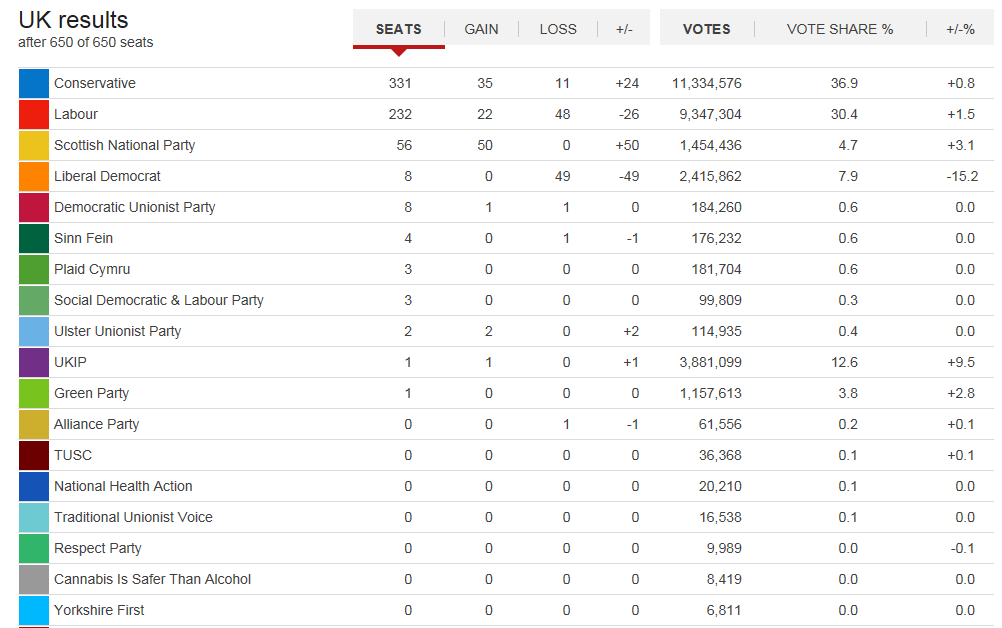 This tends to generate two large parties, as, without a geographical base, smaller parties find it harder to win seats. With a geographical base, parties that are small UK-wide can still do very well. For instance, in Scotland in 2015 the SNP won just under half the votes but won 95% of the seats providing a different view of Scottish public opinion than actually exists. As only votes that get an MP elected matter, parties need to prioritise specific voters to win seats.

First Past the Post creates safe seats, where so many of a party’s supporters live that there is no point campaigning, and marginal seats, that could change hands. Parties will design their policies to target voters in these marginal seats and spend the majority of their funds campaigning in them. However, as these seats are not necessarily representative of the rest of the country, voters in safe seat areas can feel politically neglected.

First Past the Post means that MPs can be elected on small proportions of the vote if they simply win the most votes amongst a fragmented field. In 2015 Belfast South was won with just 9,560 votes, or 24.5% of the total, a record low. It is common for MPs to be elected with less than half the support of their constituency.

Using the source, evaluate the view that first-past-the-post should be replaced as the voting system for UK general elections. (30 marks- at least 3 arguments for, 3 against)
Your answer should include: Proportions / Support / Swing / Voters / Safe / Seats / Wasted
Explanation: Good stuff. Let's try and hit those top marks by talking about the proportions, support, swing voters, safe seats and wasted votes.