Factors in voting - the theories

Social class: Until the 1970s/80s voting patterns were fairly stable, and most people were core voters- people who support the same party consistently. Class was the most reliable indicator of voting behaviour: working classes voted Labour, middle classes Conservative. Class dealignment has weakened this. In 2010, only 38% of voters were ‘class voters’ (1966= 66%).

Party loyalty: Voters used to have a clear identification with a party, which has also been in decline in recent years (reflected in declining membership levels). In 2005, only 10% of those surveyed claimed to have a ‘very strong’ attachment to a particular party (1964= 44%).

Gender: Traditionally, women supported Conservatives, but this changed with ‘New’ Labour in the 1990s, when gender no longer became an accurate predictor of voting intention. In 2015, men were more likely to vote Conservative amongst under-50s.

__Age: __Levels of Conservative support increase with age, perhaps because people become more conservative or because they are remaining loyal. Labour has more support amongst younger people.

Region: Historically, Labour had much more support in the north of England, and Conservatives the south. This trend largely continues today, with the exception of areas such as South Wales and central London, which remain Labour-affiliated. Scotland and Wales had seen a decline in the Conservative vote in the 1980s, 90s and 2000s, although there are signs that the Conservatives are winning more support in Scotland.

Policies: These can appeal to, or turn off the electorate. Labour’s 1983 manifesto is cited as an example of the latter, being dubbed ‘the longest suicide note in history’. The Conservatives tried to amend their image in the mid-2000s by revising policy on poverty and public services.

Economic performance: If the economy is performing badly, the government may be deemed to have ‘failed’ and be punished by voters. Labour may have suffered in this way by being in government during the 2008 financial crisis and the subsequent recession.

Leaders: Party leaders need to show trust, strength and likeability to help a party be electorally successful. Tony Blair was a significant figure in this regard for Labour- he was an accomplished media performer and had a very good public image in the first years of his leadership. Previously, many people voted Conservative because they saw Margaret Thatcher as a strong and principled leader. Televised debates have made leaders more important as the focus is now on them much more. Labour have suffered in recent years, with Gordon Brown, Ed Miliband and Jeremy Corbyn getting poor approval ratings in comparison with David Cameron and Theresa May.

Party image: What the public think of the party will impact on their willingness to vote for them. Labour had an image problem in the 1980s, being seen as too close to the trade unions. The Conservatives had a negative public image in the 1990s- Theresa May herself suggested that many saw them as ‘the nasty party’, seemingly uncaring about certain groups in society. David Cameron made it a key aim to ‘detoxify’ the perception of the Conservatives. In recent years, Labour have struggled with the perception that they are reckless with government finances.

Campaigning: £78m was spent by the Conservatives on campaigning for the 2015 election, perhaps giving them an advantage. Although, money spent on campaigning may be less important than newspaper support, particularly the Murdoch-owned newspapers. Local campaigning and targeting of key seats also has an impact.

Tactical voting: This occurs when voters have a choice of two candidates, neither of whom is their preferred choice. They therefore may vote for a candidate in order to prevent another from winning. This was traditionally seen through Labour voters supporting a Liberal Democrat candidate (and vice-versa) in order to prevent a Conservative from winning, although patterns of tactical voting have become more complex due to event such as the Iraq War, the participation of the Lib Dems in coalition government, and the party stances on Brexit.

As well as factors such as declining interest and engagement in politics, plus negative perceptions of politicians generally, there may be other reasons to explain this. Education levels have improved over the years, however, this should lead to an increase in voting, not a decrease. The growth of an ethnic minority population (who are less likely to vote) may be a factor, but this growth has been very gradual, whereas turnout declined sharply from 1997 onwards. Partisan dealignment may be a factor- people feel less attached to a party, so may be less inclined to vote at all. This dealignment, however, has occurred since the 1970s, well before turnout rates fell.

Given that none of the above factors can conclusively be shown to have reduced turnout it may be the circumstances of the elections that is the cause. In 2001 and 2005, Labour were not particularly popular, but the Conservatives were even less so, therefore not incentivising people to vote for either. Similarly, although the result was close in 2010, Labour under Gordon Brown had become very unpopular and the Conservatives still had a fairly negative image amongst many voters. The lack of ideological ‘space’ between the parties perhaps also contributed to the feeling of a lack of proper choice for the electorate, many of whom responded by not bothering to vote at all. 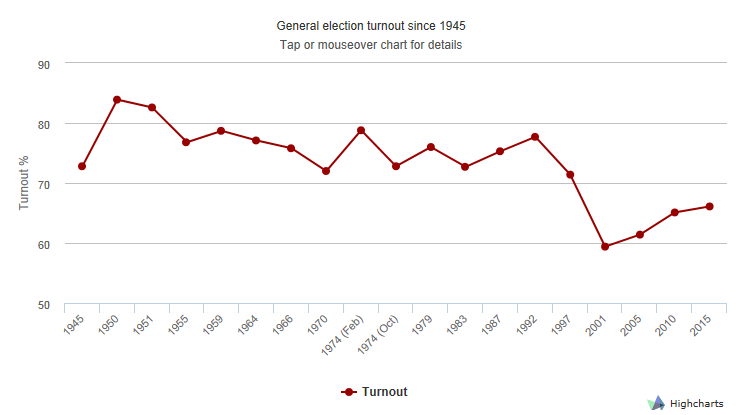