Executive: the branch of government responsible for implementing (‘executing’) legislation. The executive includes the government and the civil service

Prime Minister: the head of government (but not head of state)

Cabinet: a formal committee of leading government members, including heads of government departments

Kitchen cabinet: an informal group of advisers consulted by the PM, which may include some cabinet members and individuals outside of the cabinet

Core executive: the informal network of individuals and groups who are involved with policy-making. Who is part of the core executive depends on the PM, but will usually include the PM themselves, key members of the cabinet, senior officials from government departments and possibly outside bodies such as intelligence services, key MPs such as whips, and policy advisers the PM chooses to consult with

In theory, anyone can become prime minister (as the Queen appoints the PM). In practice, they need to be an MP (so at least 18 years old, and a UK or Commonwealth citizen); a party leader; and the leader of the party who has a majority in the Commons. Sometimes PMs become PMs not through an election but because they become leader of the majority party (for example, Gordon Brown, Theresa May). Sometimes party leaders become prime minister without having an overall majority (for example, David Cameron in 2010 __and Theresa May in __2017).

The prime minister has the following roles:

The prime minister’s role has grown and developed over time, as there is no codified constitution setting out the ‘official’ role and significance. In theory, the PM is ‘primus inter pares’ (first among equals), as they have an equal say in cabinet policy discussion, but are the primary representatives of government. In practice, modern PMs can be argued to be more significant than this, perhaps resembling US Presidents in terms of power and influence.

The cabinet is made up of around 20 members of the government, most of whom run departments, for example the Treasury, the Home Office, the Foreign Office and so on. It meets every Wednesday morning, usually for less than two hours. There is a ‘hierarchy’ of importance within the cabinet, the most important posts being Chancellor, foreign secretary, home secretary and deputy prime minister (although a deputy PM is not always appointed).

The cabinet has the following roles: 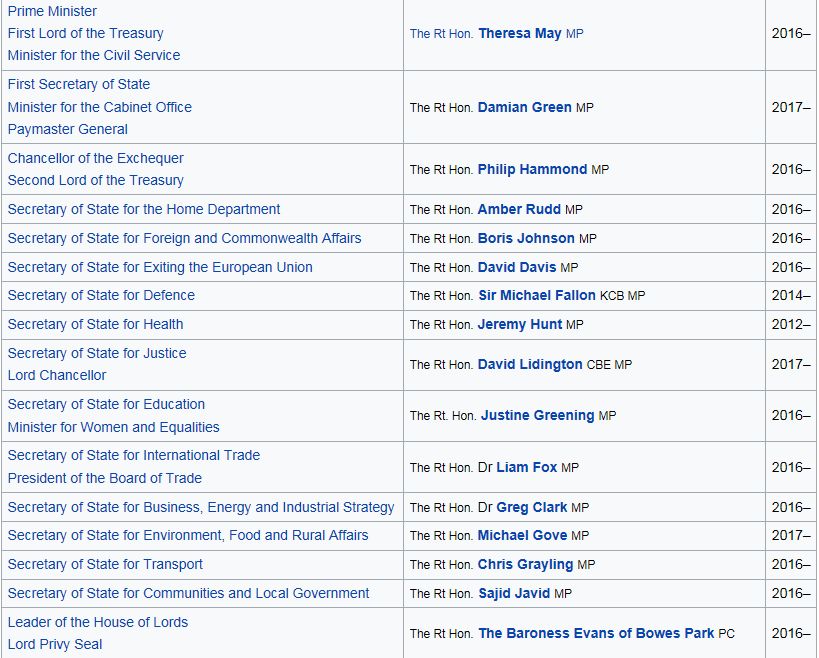 Ministers oversee the work of, and run, the various government departments. They work with civil servants, who are not in the cabinet (although very senior and experienced civil servants may be asked to attend cabinet meetings). Secretaries of state are the most senior ministers, followed by ministers of state (who are not in the cabinet), parliamentary under-secretaries of state (often referred to as junior ministers), and finally parliamentary private secretaries (PPSs), who are not paid for this role, but work with more senior ministers. PPSs are not members of the government but would vote with the government when it comes to legislation- this is part of the so-called ‘payroll vote’.

Civil servants work with ministers to implement government policy. They are permanent (their position does not change with governments), neutral (expected to be loyal to whatever party is in power) and anonymous (they are not known publically, as they are not ultimately responsible for policy). Although in practice, there were concerns in the past that the civil service had too much power. It was argued that ministers would only make a few policy decisions, and relied heavily on civil servants for advice and information (satirised in the sitcom Yes, Minister). They were also thought to be possibly politically biased in favour of the Conservative Party. Therefore, efforts have been made to provide ministers with alternative sources of information, from example independent advisers and think-tanks. It is now argued that maybe the civil service has too little power.

In addition, ‘executive agencies’ exist. These are best described as semi-independent from the government. They carry out some functions of government departments, for example the DVLA carries out functions of the Department for Transport, by issuing licences, penalty points, registering vehicles, and so on.

The concept of ministerial responsibility

Collective responsibility: the notion that government (as a collective whole) is responsible to Parliament for its actions. If the government was defeated in a vote of no confidence, all of its members would resign. Under this, all ministers publically support policy from all departments, even if privately they may have some reservations. Ministers resign if they cannot publically support policy, even if it is not related to their department. Cabinet disagreements are therefore kept private and resolved privately.

Individual responsibility: the notion that ministers are responsible to Parliament for the actions of their own departments. They can be held to account for their department’s actions through Question Time or select committee scrutiny. They may resign in the event of mistakes in their departments, or from them personally, or personal scandals. Under this, civil servants in a particular department should be loyal to their minister and support their actions.

Resignations: the above concepts are illustrated by examples of ministerial resignations.

Exceptions: in some cases, collective responsibility may be weakened. For example, during the coalition, government policy needed to be negotiated between two parties, taking the coalition agreement into account. As the two parties had different sets of beliefs, and different manifestos, binding ministers to collectively support all policy would have been impossible. Therefore, certain areas were identified as being exempt from collective responsibility (for example, campaigning for the AV referendum. More informal areas of difference emerged over time, for instance disagreement over proposed parliamentary boundary changes.

The campaigns leading up to the __2016 __EU referendum also saw collective responsibility suspended, to allow cabinet members to openly campaign on both sides, reflecting the differing views within the Conservative Party on the issue. David Cameron and George Osborne were amongst those campaigning for a ‘remain’ vote, whereas Michael Gove and Chris Grayling campaigned for ‘leave’. Boris Johnson was also a leave campaigner, although at the time he was not a member of the government.

Main functions of the executive

The PM has the formal power to appoint ministers and senior figures such as important judges, to dissolve and recall Parliament (although this has been eroded by the Fixed Term Parliament Act), sign treaties and grant honours. These powers are derived from the monarch’s Royal Prerogative, which is no longer used by the monarch but by the executive. In practice, the PM has considerably more powers than this. The more ‘informal’ powers exercised by the PM include:

The executive generally has control of the legislative agenda, as the majority of legislative time is spent considering government bills, which are usually likely to become law. The executive also has powers of ‘secondary legislation’ (sometimes referred to as delegated legislation), where ministers are granted specific powers under laws passed by parliament, including the making of guidelines and regulations and the approval of projects and actions.