“In 1997 Labour returned to power with a parliamentary landslide, winning the biggest majority held by any government since 1935- 179 seats. The election also saw the Liberal Democrats put in a strong performance, more than doubling their number of MPs despite taking a reduced share of the vote compared with 1992.” 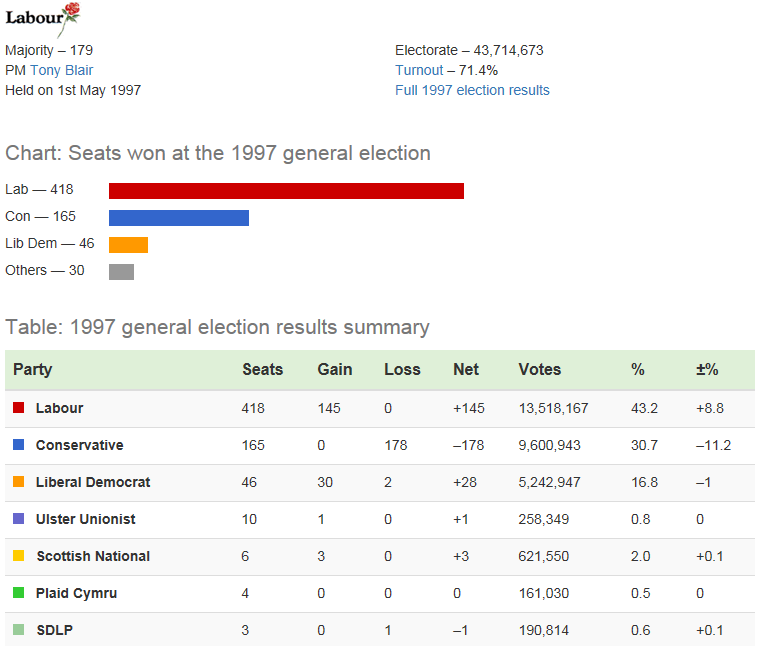 Background and Campaign: “The Conservatives had taken a hit on their traditional reputation for economic competence. In September 1992 __the pound spectacularly crashed out of the European Exchange Rate Mechanism. From this stage on Labour was ahead in the polls. In addition, there was open Conservative feuding on Europe and this was responsible for the government’s defeat on the Maastricht Bill in __1993 __as well as for John Redwood’s __1995 __leadership challenge. There were 12 Conservative resignations from office taking place over allegations of personal impropriety and misconduct, meaning the Conservatives were in a very weak position going into __1997.

For Labour, John Smith replaced Neil Kinnock as the leader, but died of a heart attack in May __1994 __and was replaced by the shadow home secretary, Tony Blair. Under Blair, the “modernisation” process started by Neil Kinnock gathered momentum. Blair dropped the commitment to nationalisation set out in Clause IV of the Labour constitution and rebranded the party as New Labour. The polls briefly registered a Labour lead over the Tories’ of above 30%.

John Major left it until the last possible minute before calling the __1997 __election, in the hope that the “feel-good factor” that accompanies economic prosperity would turn around Tory fortunes in the polls, but it never did.

Left with little alternative, Major hoped a long campaign - six weeks, from 17 March to polling day on 1 May - would expose New Labour’s policies to scrutiny and see the party’s relatively inexperienced leadership crack under pressure.

But in the face of a professional, super-disciplined and highly cautious campaign by a Labour Party fearful of losing an election it was overwhelmingly expected to win, the Tory strategy had little impact. Labour had adopted campaigning techniques from the US, including a rapid rebuttal unit designed to ensure a swift and sure response to any Conservative attacks on the party.

The Conservatives struggled throughout. Things got so bad between Major and members of his own cabinet he was even caught on tape referring to several of them as “bastards”.

But despite the Tories’ problems, by 1997 __Major could point to a strong economy - and campaigned on the theme “Britain’s booming, don’t let Labour ruin it”. However, since the Tories had denied responsibility for the recession of the early __1990s, the voters did not give them credit for the subsequent recovery.

Even traditionally Tory-supporting newspapers deserted the Conservatives- the Sun newspaper backed Labour for the first time in decades.

As well as Conservative weaknesses, the result of the election was undoubtedly down to Tony Blair’s leadership. When he took over, the “modernisation” of the party was escalated to a degree not previously thought possible. The priority remained to strip away policies that he believed had lost the party the crucial support of the middle classes in 1992. He portrayed himself, successfully, as the strong and decisive leader of his party, setting a clear policy direction.

In addition, Lib Dem leader Paddy Ashdown - the oldest but perhaps most energetic of the main party leaders – had a strong personality - and a forthright style which impressed many voters.

Labour campaigned on promises not to raise income tax, to cut class sizes and reduce NHS waiting lists, which were designed to repel any Tory attacks on Labour as a ‘tax and spend’ party. Blair also made clear that education would be the government’s top priority.

The Tory manifesto kept the party’s options open on whether to join the single currency, but firmly rejected a federal Europe. It made pledges to privatise the London Underground as well as imagining a state were the State Earnings Related Pension was phased out - neither commitment was a vote winner.

Like Labour the Liberal Democrats put education at the top of their agenda. They promised £2bn would be pumped into the school system, while they also offered to restore fee eye and dental checks. Paddy Ashdown told the voters that the party would need an extra 1p on income tax if elected to fund these commitments.”

Results: “Labour won 418 seats, the most seats the party has ever held, and the highest proportion of seats held by any party in the post-war era. The election saw a huge 10.2% swing from the Conservatives to Labour on a national turnout of 71% and would be the last national vote where turnout exceeded 70% until the 2016 __EU referendum was held nineteen years later. Blair was to be Prime Minister until his resignation in __2007. The New Labour project, having been shown to be electorally successful, continued until __2010 __under Gordon Brown’s leadership, and the Conservatives were destined to spend 13 years out of government as the party struggled to modernise its image.”