The Conservatives won a surprise outright majority, similar to their victory in the 1992 __general election. Having governed in coalition with the Liberal Democrats since __2010, the party won 330 seats and 36.9% of the vote, this time winning a working majority of 12. 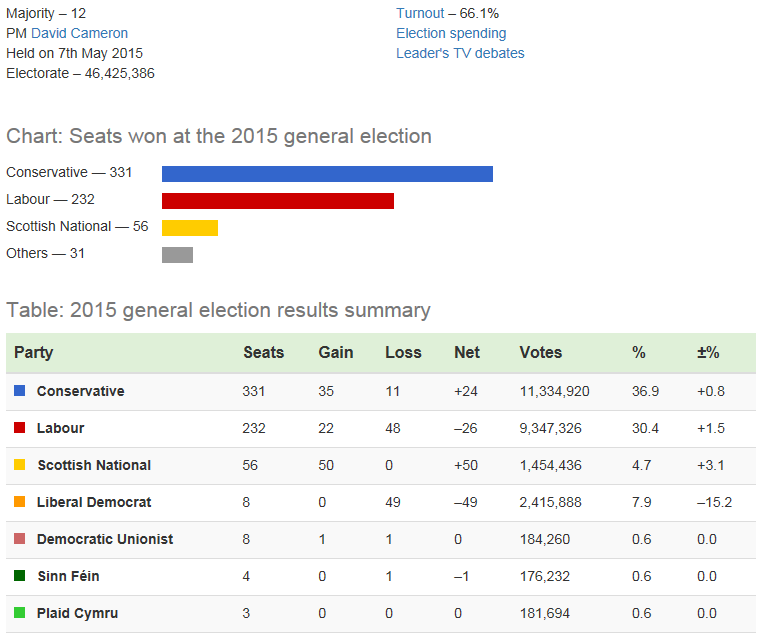 Background and campaign: Prior to the 2010 __general election, the Labour Party and the Liberal Democrats pledged to introduce fixed-term elections. As part of the Conservative–Liberal Democrat coalition agreement, the coalition government agreed to support legislation for fixed-term Parliaments, with the date of the next general election being 7 May __2015. This resulted in the Fixed-term Parliaments Act 2011, which removed the prime minister’s power to advise the monarch to call an early election.

The campaign was dominated by the possibility (and expectancy) of a Hung Parliament. With the outgoing Government a coalition and opinion polls not showing a large or consistent lead for any one party, it was widely expected and predicted throughout the election campaign that no party would gain an overall majority, This was also associated with a rise in multi-party politics, with increased support for UKIP, the SNP and the Greens.

The question of what the different parties would do in the event of a hung result dominated much of the campaign. Smaller parties focused on the power this would bring them in negotiations; Labour and the Conservatives both insisted that they were working towards winning a majority government, while they were also reported to be preparing for the possibility of a second election in the year. Most predictions saw Labour as having more potential support in Parliament than the Conservatives, with several parties, notably the SNP, having committed to keeping out a Conservative government.

Conservative campaigning sought to highlight what they described as the dangers of a minority Labour administration supported by the SNP. This proved effective at dominating the agenda of the campaign and at motivating voters to support them. The Labour, Conservative and Liberal Democrat parties rejected the idea of a coalition with the SNP. This was particularly notable for Labour, to whom the SNP had previously offered support. SNP leader Nicola Sturgeon later confirmed that she was prepared to “help make Ed Miliband prime minister.”

The Liberal Democrats said that they would talk first to whichever party won the most seats. They later campaigned on being a stabilising influence should either the Conservatives or Labour fall short of a majority. On the question of finance and the economy, the budget deficit, who was responsible for it and plans to deal with it were a major theme of the campaign. While some smaller parties opposed austerity, the Conservatives, Labour, Liberal Democrats and UKIP all supported some further cuts, albeit to different extents.

Conservative campaigning tried to blame the deficit on the previous Labour government. Labour, in return, attempted to establish their fiscal responsibility. With the Conservatives also making several spending commitments (e.g. on the NHS), commentators talked of the two main parties’ “political cross-dressing”, each trying to campaign on the other’s traditional territory.

The first series of televised leaders’ debates in the United Kingdom was held in the previous election. After much debate and various proposals, a seven-way debate with the leaders of Labour, the Conservatives, Liberal Democrats, UKIP, Greens, SNP and Plaid Cymru was held with a series of other debates involving some of the parties.

Much of the media supported the parties they traditionally backed. A feature of the media campaign was a relentless negative focus on the competence of Labour leader Ed Miliband, who was portrayed as weak and not a potential Prime Minister. David Cameron, on the other hand, had a generally favourable media portrayal.

The Scottish National Party, enjoying a surge in support since the 2014 __Scottish independence referendum, recorded a number of huge swings of over 30% (including a record-breaking swing of 39.3% achieved in Glasgow North East) from Labour, as it won 56 of the 59 Scottish seats to become the third-largest party in the Commons. The Liberal Democrats had their worst result since being formed in __1988, holding just eight out of their previous 57 seats with cabinet ministers Vince Cable, Ed Davey and Danny Alexander losing their seats. UKIP came third in terms of votes with 12.6%, but only won one seat, with party leader Nigel Farage failing to win the seat of South Thanet. The Green Party won its highest-ever share of the vote with 3.8%, and held Brighton Pavilion with an increased majority, though did not win any additional seats.Miliband resigned, as did Clegg. Farage claimed that his resignation was rejected by his party, and he remained in post.

Which party arguably helped to split the Labour vote in 1983?
Your answer should include: Liberal / SDP
Who was Labour leader in 1983?
Michael Foot
Which event had helped boost Thatcher’s popularity prior to 1983?
Falklands War
What was Labour’s 1983 manifesto nicknamed?
Longest suicide note
Who had Tony Blair taken over as Labour leader from prior to 1997?
John Smith
What were the Conservatives arguing over throughout the 1992-1997 Parliament?
Europe
How large was the Labour majority in 1997?
179
What was the turnout for the 2015 election?
Your answer should include: 66% / 66
How big a majority did the Conservatives end up winning in 2015?
12
Which three leaders resigned following the 2015 result (although one of them promptly ‘un-resigned’)?
Your answer should include: Miliband / Clegg / Farage