“Margaret Thatcher’s second election victory in 1983 __was one of the most decisive in post-war Britain. The Conservatives benefited from a three horse race, in which votes for the opposition were split between the Labour Party and the Liberal/SDP Alliance. Thatcher’ majority rose to 144 seats. In terms of share of the vote, Labour only just managed to come in ahead of the Alliance, in their worst election performance since __1918.” 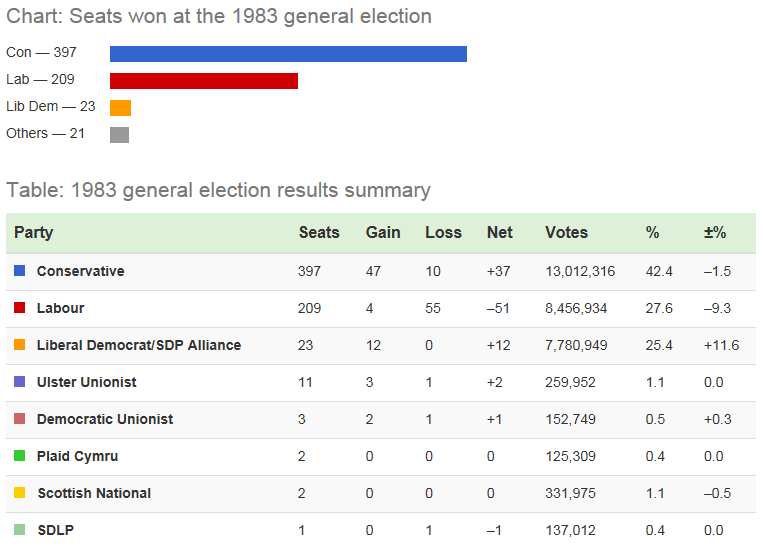 Background and campaign: “The Conservatives entered the __1983 __general election campaign in good shape. Although Margaret Thatcher was one of the most unpopular Prime Ministers in history during her first years in office, Britain’s victory in the Falklands conflict in __1982 __radically improved her personal popularity and that of the Conservative Government. Labour, on the other hand, were weakened by internal divisions and defections to the new Social Democratic Party (SDP).

Michael Foot became the new leader of the opposition in 1980. The election of Foot as leader represented a dramatic swing to the left, and served to polarise divisions in an already divided party. In 1981, former Cabinet ministers Roy Jenkins, Shirley Williams, Bill Rogers and David Owen left the Labour Party to form the SDP. Jenkins soon entered into a pact with the Liberals, forming a new political unit known as The Alliance.

Buoyed by the victory over Argentina in The Falklands, as well as an improving economic situation for some sectors of the electorate, Mrs Thatcher decided to go to the polls. The May local election results, and favourable opinion polls, encouraged her in this decision. When she announced the election for 9 June, some opinion polls showed her running up to 18 points clear of Labour.

The Conservatives’ manifesto was formed around three pillars - defence, employment and economic prosperity. The Tories remained committed to membership of the European Community, an independent nuclear deterrent, trade union reform, further privatisation, a long-term reduction in taxation and a war on inflation.

The Labour manifesto was later dubbed “the longest suicide note in history”. It contained some extreme pledges including withdrawal from the Common Market, the abolition of the House of Lords, the cancellation of the Trident nuclear programme and the removal of Cruise missiles from Britain.

The Conservatives remained on top throughout the campaign. Thatcher’s media portrayal was very strong, whereas Foot’s was very negative. Foot was forced to modify the manifesto’s defence commitments, saying Labour would “move towards” a non-nuclear defence policy and the removal of nuclear bases. Meanwhile, the Alliance made few in-roads. Despite more television coverage than ever before the voters remained disinterested. With the polls about to close, the Tories looked likely to romp home by benefiting from the split in the opposition vote.”

Nationally, there was a swing of 3.8% from Labour to the Conservatives. The most pronounced regional swings occurred in Southern England, where Labour won only two seats out of a possible 110.

The Conservatives had reaped the rewards of Labour’s divisions to win one of the largest majorities in post-war history, second only to Clement Attlee’s Labour majority in 1945. Margaret Thatcher was now firmly entrenched as Prime Minister with a majority that would ensure the passage of her increasingly radical agenda. The Labour Party was left badly wounded by defeat, and began the process of a comprehensive policy review which saw it move away from the __1983 __manifesto policies.”