In Number Bases - Binary, we saw that there are different number base systems, and we looked at how we can convert between binary (base 2) and decimal (base 10). One thing that you may have very quickly worked out, is that converting between binary and decimal isn’t very nice… but writing numbers using binary is long and tedious! This is where hexadecimal comes in.

Hexadecimal is a base 16 number system. This means that the column headers now go up in powers of 16. 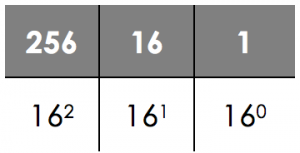 In computer science though, we only ever really use 2 digits.

Hexadecimal is used to make binary numbers easier to read for humans, avoid mistakes and allow us to quickly convert into binary. It is important to remember though that computers don’t understand hexadecimal any more than they can understand decimal. It’s just a way for humans to represent numbers.

Converting between hexadecimal and binary is simple as all we need to worry about is converting each nibble at a time.

Converting between hexadecimal and binary is simple as all we need to worry about is converting each nibble at a time.

To convert a binary number to hexadecimal you need to follow these steps:

First we convert the number into nibbles:

Then, looking at each nibble, we convert that into its corresponding hexadecimal digit:

This is very similar to what we have just seen but the other way around:

Since we only really have 2 hexadecimal digits to consider, this is slightly more straightforward than converting binary numbers to decimal, but uses the same principles. 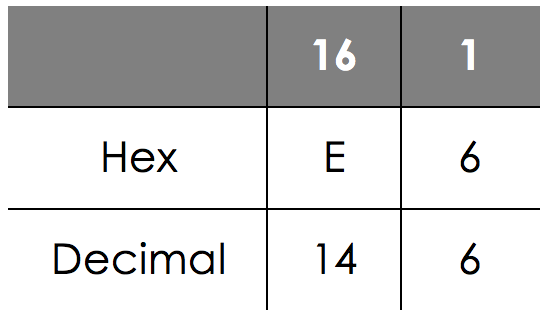 So the decimal value would be:

So 75 in decimal is 4B in hexadecimal.