Arthur Kipps is the protagonist, who tells the story of his early professional days as a solicitor. He visited Crythin Gifford for a job that focused around Eel Marsh House. Here, he heard many unexplained noises, which the local community then informs him are from ‘The Woman in Black’, a well known ghostly figure known in the area. The story discusses the death of a child, which consequently leads to the deaths of many other children, most notably his own wife and child. 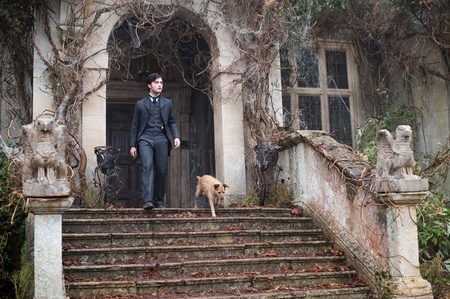 ‘Whistle and I’ll Come To You’ is an extract from ‘The Woman In Black.’ This was made into a film. Daniel Radcliffe, who played Harry Potter, is the protagonist. Gothic literature is often extremely dark and descriptive. It aims to create a sense of fear and dread. Often, Gothic literature is focused around one scary setting, such as an ancient house. There is usually one character who instills fear in our main protagonist. It is often associated with the 19th and 20th century.

Susan Hill was born in England and she is known for her Gothic style, famously writing many ghost stories. She uses description to create suspense.

Personification is the assignment of animate (living) features to inanimate (non-living) objects. At the beginning of the extract the:

‘Windows were rattling everywhere and there was the sound of moaning down all the chimneys of the house and whistling through every nook and cranny.’

Note how the chimneys sounded as though they were complaining and unhappy. This sets the mood for the rest of the extract.

‘I listened hard. Nothing. The tumult of the wind, like a banshee, and the banging and rattling of the window in its old, ill-fitting frame. Then yes, again, a cry, that familiar cry of desperation and anguish, a cry for help from a child somewhere out on the marsh. There was no child. I knew that. How could there be? Yet how could I lie here and ignore even the crying of some long dead ghost?’

Within this section, simple sentences, rhetorical questions and complex sentences are all intertwined, creating a tense atmosphere.

Words that create a Gothic atmosphere are important within the extract. Note the spooky setting: ‘disturbed’, ‘alone’, ‘night’ and ‘rage.’

Many adjectives are used to create the creepy setting.

The opening of the extract is highly descriptive. This sets the scene for the remainder of the novel and highlights the tension.

As the extract progresses, it becomes darker and more gothic. However, it is towards the end that:

‘The first thing I must have was a light’.

Arthur uses the light to break the darkness that was created. It is only then that he is comforted by Spider, who provides warmth in the cold atmosphere: ‘hugged’ is one of the few positive verbs provided.

Compare the tension in ‘Whistle and I’ll Come to You’ to another text of your choice.

Compare the sense of fear in ‘Whistle and I’ll Come to You’ to another text of your choice.

How is the protagonist presented in ‘Whistle and I’ll Come to You’? Compare it to a text of your choice.