During__ __mitosis, cells divide to produce two new ones which are exact copies of the original cell.

Two__ __daughter cells are produced from the parent cell.

Each daughter cell has 46 chromosomes.

All body cells divide by the process of mitosis, and are therefore identical to their parent cell. The only cells in the human body that do not undergo mitosis are the gametes, or sex cells __(__egg and sperm) which undergo a different process called meiosis. Egg and sperm cells each only have 23 chromosomes.

When a cell is growing and dividing, it will go through the cell cycle:

Here are the stages of mitosis in a diagram: 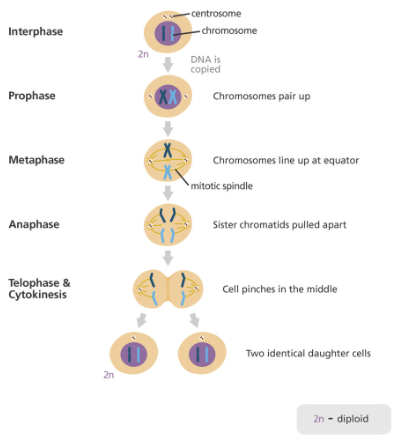 Mitosis is needed for __repair __and __replacement __of cells:

The human body is constantly undergoing mitosis as it is needed to grow and replace old and damaged cells.

Unfortunately, cells can start to divide uncontrollably, even when the body does not need them. The production of new cancerous cells may produce tumours.

Benign tumours normally grow quite slowly through a membrane, therefore it can be removed quite easily. Benign tumours don’t tend to grow back, and they do not spread to other body parts.

On the other hand, malignant tumours are cancerous and they tend to grow quickly. It can spread to other body parts in the bloodstream.

Growth takes place in both animals and plants.

In order for plants and animals to develop from a single cell, they must divide through mitosis in order to produce a__ __multicellular organism.

Cells will differentiate as they continue to divide, grow and develop. These cells are different from the original cells, as they become specialised into different functions. These specialised cells would then work together in order to enable the multicellular organism to function.

Where does mitosis occur?

Animals have complex systems that include a range of organs that work together in order to allow an organism to function:

Plants also have specialised cells which allow them to function and survive: