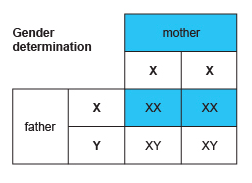 An individual has two copies of each gene, so can only have two alleles of any gene, but there can be more than two alleles of a gene in a population - this is called multiple alleles. This can be found when studying human blood groups.

Here are the two main causes of variation that influence the phenotype:

The Human Genome Project started in 1990 and was completed in 2003. They investigated all of the base pairs that made up the genome of individuals. It has been extremely useful for scientists are can now look at a range of diseases and whether their genetics is linked to them.

A mutation is a change in the gene or chromosome.

Although it is quite rare, it is still possible and can have life-changing effects on an individual. A mutation is something that can be inherited from the parents.

A lot of variation arises within the population because of mutation that has taken place.

Some mutations can have little to no effect, some can be useful, but some are also harmful. It depends on where the mutation took place, and whether it is severe or not.