Inside of the nucleus, we can find genetic material that is made up of a chemical called DNA.

DNA is a polymer that is made of two strands coiled to form a double helix.

Nucleotides consist of a sugar and phosphate group with one of the four different bases (A, C, T or G) attached to the sugar.

Nucleotides join up together, allowing them to form two strands - this makes up the double helix. The strands are linked by a series of complementary base pairs joined together by weak__ __hydrogen bonds. The bases are always paired together in a specific way:

This contains the genetic code, which then determines the characteristics of a living organism.

A genome is one copy of all of the person’s DNA. It contains unique information about the individual person. 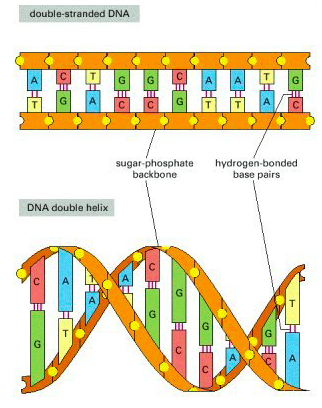 You should be able to see strands of DNA when the ethanol and filtrate meet.

Each gene leads to a set of instructions to create a specific protein.

These proteins are vital as it controls many aspects of the cell.

The bases must group together in triplets in order for genes to code for proteins. Each of these triplets of bases codes for a specific type of amino acid. The amino acids can only be made based on the number and order of the base triplets.

Amino acid molecules then join up into a long chain, creating a protein molecule. The number and order in which the amino acids are put together will then specify which protein is created.

Enzymes are a common and vital protein that is created from these long chains of amino acid molecules.﻿﻿ 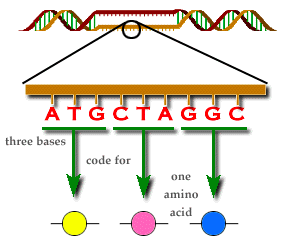 Genetic variants in the non-coding DNA of a gene can affect phenotype by influencing the binding of RNA polymerase and altering the quantity of protein produced.

﻿﻿﻿Genetic variants in the coding DNA of a gene can affect phenotype by altering the sequence of amino acids and therefore the activity of the protein produced.