Our understanding of inheritance began with the work of Gregor Mendel.

He bred pea plants, and later found that when he crossed pink pea plants with white pea plants all the offspring had pink flowers. He also found that certain characteristics can skip a generation, then reappear.

Punnett squares can be used to look at combinations of genetic crosses in single genes.

This would show the possible combination of offspring that can be produced - you would be able the calculate the probability of obtaining a certain characteristic.

Whether someone has hairy ears or non-hairy ears is controlled by a single gene with 2 alleles: hairy and non-hairy.

Whether someone has sickle cell anaemia is determined by a single gene with 2 alleles: S and s.

If two carriers of sickle cell anaemia have a child together, here is the punnett square to represent this information:

This is another type of diagram that shows the genotype and phenotype: 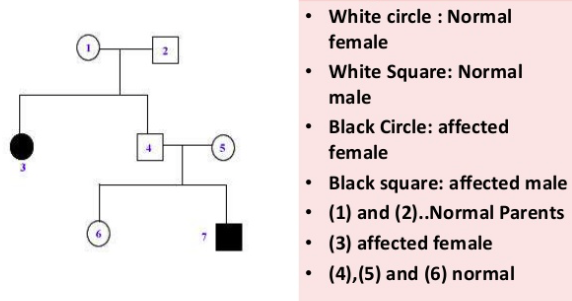 How many chromosomes does a fertilised egg have?
46
Where are chromosomes found?
Nucleus
Explanation: Inside the nucleus
What is the genotype of someone that suffers from sickle cell anaemia?
ss