The doppler effect occurs due to the apparent change in wavelength between a source and an observer due to their relative motion.

Fortunately, we also have any equation to describe the doppler effect (z):

• Objects moving towards the observer have a positive speed; moving away from the observer the speed is negative.

• If the object is moving away, the frequency is lower so that Δf is negative. The wavelength will be longer.

• If the object is coming towards the observer, the frequency is higher, so Δf will be positive. The wavelength will be shorter.

The minus sign tells us that the star is receding from us. The longer wavelength is called red shift, i.e. it has been shifted towards the red end of the spectrum.

Binary stars is a system in which two stars orbit around each other. This means that sometimes they blueshift and sometimes they redshift in a repeating pattern.

Their apparent magnitudes will also brighten and dim as they move to and from ourselves.

Quasi-stellar objects (quasars) were discovered in 1960. They are very luminous objects at immense distances. They appear to light telescopes as stars but are not typical:

• Spectra show lines that correspond to no known elements.

• However the lines were in fact considerably red-shifted.

• Some are intense radio sources.

The red shift suggests that the objects are moving away from us at 15 % of the speed of light. According to Hubble’s Law, that means that they are a very long way away. So we can say that Quasars are:

• smaller than a galaxy.

Galaxies are also red shifted which implies that they are moving away from us. In fact, almost all galaxies are redshifted implying that the universe is expanding in all directions.

Hubble’s Law shows the relationship between the speed of a receding galaxy and the distance is it from Earth.

The equation from this graph is:

• We can work out the recession velocity by using the red shift;

• The distance is worked out by other means which are not needed here.

There are two possible reasons for red-shift in light:

• Stars are moving away from us.

• The universe itself is expanding.

If the second reason were correct, it would seem that the Universe has been much smaller in the past, and that at one point the universe was entirely concentrated in one point. This led to the theory about how the universe began, in a stupendous explosion, the Big Bang.

The age of the universe is given as: 1/H0

At the upper limit of the Hubble constant, the universe is about 10 000 million years old. Studies suggest that the Earth is about half this age. As the universe expands, the galaxies move further apart

Dark energy is just the latest cosmological controversy in a long line. Ten years ago it was quasars, and fifty years ago it was the Big Bang. The theory suggests that, over the past 15 billion years or so, the Universe has expanded from an extremely hot and dense point, and is still expanding.

Evidence clearly comes from the Hubble relationship and observations of the red shift of distant galaxies. Further supporting evidence came from the discovery of the cosmological microwave background radiation. This is a ‘glow’ from all parts of the Universe, the spectrum of which follows a black body radiation curve with a peak in the microwave region. This peak corresponds to a temperature of 2.7 K. It can be interpreted as the leftover ‘heat’ from the big bang, the photons having been stretched to longer wavelengths and lower energies (more correctly perhaps, it is the radiation released when the Universe cooled sufficiently for matter and radiation to ‘decouple’, with the combination of protons and electrons to form neutral atoms). The final piece of evidence comes from the formation of nuclear matter.

The Big Bang theory suggests that a very brief period of fusion occurred when the Universe was very young, resulting in the production of helium from fusing hydrogen. The Universe then expanded and cooled too rapidly for the creation of larger nuclei, resulting in a relative abundance of Hydrogen and Helium (in the ratio of 3:1) spread uniformly throughout the Universe, and a lack of larger elements. This is consistent with observation.

Humans are constantly on the lookout for exoplanets - planets that are suitable to sustain life and human life.

There are number of different techniques such as the transit method and the radial velocity method (the variation in doppler shift).

The transit method is as follows:

It is important to have more than one method to ensure accurate results as other causes could yield similar or even the same results.

TheRadial velocity (Doppler) method looks at the periodic shift in spectra of the star due to star’s movement around common centre of mass with planet. Earth-like planet mass much less than mass of Sun-like star so effect slight. Earth-like planet could be detected with highly sensitive spectrometers.

The last method is the direct observation method. This works as it sounds, however it is highly unlikely to yield any results as the exo-planet would be too small and too near a star to be able to be detected. 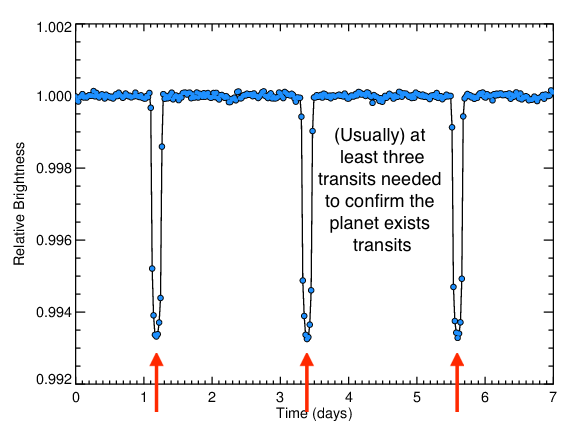