Where there is an object moving in a circular path at a constant speed, there is a forever changing velocity, acceleration and a centripetal force is required.

The changing velocity and acceleration occur because these are vector quantities. Since circular motion always includes a change in direction, this causes any vector quantity to continuously change.

Centripetal force acts from the object towards the pivot that it is turning around. 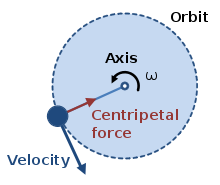 Angular speed, which is the magnitude of the velocity can be calculated by the following relationship.

2𝝿 = Angle of a full circle in radians. Note that the actual angle in a question might not be a full circle. Ensure that you can convert from degrees into radians (times by pi and divide by 180).

f = Frequency (Hz) Note that if the question gives you a time, recall that

The acceleration of an object in a circle can be calculated by the following relationship:

The last relation in this section is the calculation for centripetal force:

Simple Harmonic Motion (SHM) describes the way that oscillating objects move. Consider a spring with a mass going from side to side and a mass is mounted on a small railway truck, which is free to move from side to side.

At A there is a large restoring force because that is where the spring is stretched most. As a result of this the mass is accelerated. It accelerates __towards __the rest position.

Then the spring is being compressed, and there is a restoring force to the right.

At B the acceleration is at a maximum, but this time to the right.

At both A and B, the potential energy is at a maximum; the kinetic energy is zero.

As the mass passes the equilibrium position, there is zero potential energy, but maximum kinetic energy because this is the point at which the object has its greatest velocity. Therefore there is an interchange between potential and kinetic energy.

We can write down a relationship between the acceleration, a, and the displacement, x.

The conditions for SHM are that:

Some useful relationships for SHM

Generally we measure the period, which is the time taken to make a complete oscillation or cycle. The frequency is the reciprocal of the period: f = 1/T

Angular velocity is a quantity that is borrowed from circular motion. It is the angle in radians turned per second. In SHM terms, we can consider it as the fraction of a cycle per second. It can be, of course, greater than 1: ω = 2𝝅f

In this relationship, A is the amplitude and x is the displacement from the equilibrium position. If x = 0, v has a maximum value; if x = A, v = 0. The velocity is 0 at each extreme of the oscillation.

The plus and minus sign here tells us that the motion is forwards and backwards. Which sign we give for direction is up to the individual. Generally left to right is forwards. 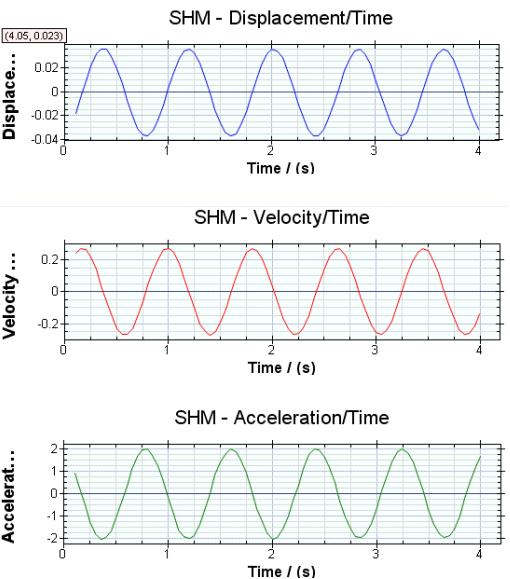 All these equations are true for any simple harmonic motion. We can show the relationships graphically by showing displacement, velocity, and acceleration against time:

The extension of a spring is directly proportional to the force (Hooke’s Law). Consider a mass, m, put onto a spring of spring constant k so that so that it stretches by an extension_ l_.

The force on the spring = mg, and the stretching tension = k l.

Suppose the spring is pulled down by a distance x below the rest position. Now the stretching force become k(l + x).

This is also the tension in the spring acting upwards. So the restoring force,

This is because mg is the weight, which always acts downwards.

We can now apply Newton II to write: -kx = ma (The negative sign tells us that the force is upwards)

Since a = -𝛚2x we can say that the condition for SHM is satisfied in this system, as long as Hooke’s Law is obeyed. Since T = 1/f, we can now write down an expression to relate the period with the mass and the spring constant. T = 2𝝅√(m/k)

Consider a small bob of mass m hanging from a very light string, length l , which in turn hangs from a fixed point. If it is pulled to one side through a small angle 𝛳 it will swing with a to-and-fro movement in the arc of a circle

As weight mg is a vector, we can break it into its two components, mg cos𝛳 and mg sin𝛳.

At point A the bob accelerates with an acceleration a due to the force mg sin𝛳.

We can apply Newton’s 2nd Law to write:

The relationship a = -𝜔2x arises because this is a simple harmonic oscillator.

In this case 𝜔2 = g/L because the x terms cancel out.

So we can write the formula linking period with length and gravity constant as: T = 2𝜋√(L/g)

There is constant interchange between kinetic and potential energy as the pendulum (or other oscillator) swings to-and-fro. If the system does not have to work against restrictive forces, such as friction, the total energy will remain constant.

We can show the variation of the energy graphically:

Now we will look at the energy with displacement:

Potential energy is highest when the oscillator is at the maximum amplitude;

Kinetic energy is highest when the oscillator 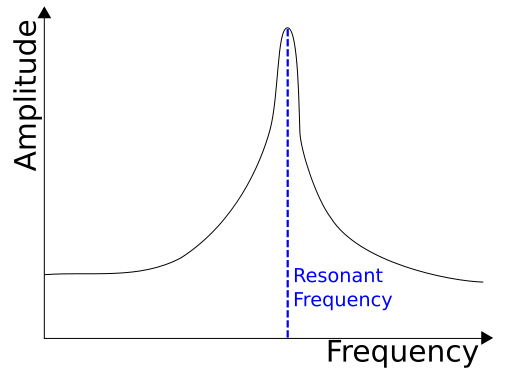 A free vibration occurs when a system is displaced and is left to oscillate. 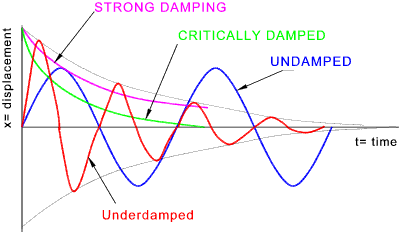 Critical damping stops the oscillation within one cycle. Over-damped systems do not oscillate. They take a long time to return to the equilibrium position. An example is the return spring on a door.