There was a major change to the atomic model by a scientist called Rutherford. This model is called the nuclear model.

He conducted an experiment now known as the alpha particle scattering experiment (set up shown below). He fired a beam of alpha particles (Helium nuclei) at a very very thin stripe of gold foil. A number of observations led to some new conclusions and insights. 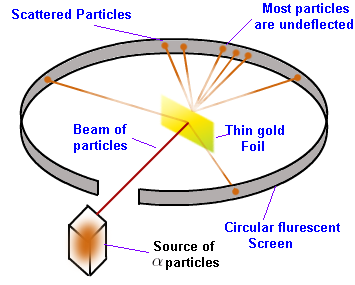 The observations and conclusions were as follows. 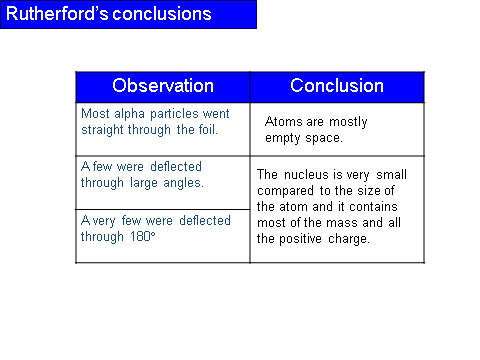 It was originally expected that all the alpha particles would pass through the foil without any deflections.

History of an Atom

Our understanding of the atomic model has changed throughout ages: 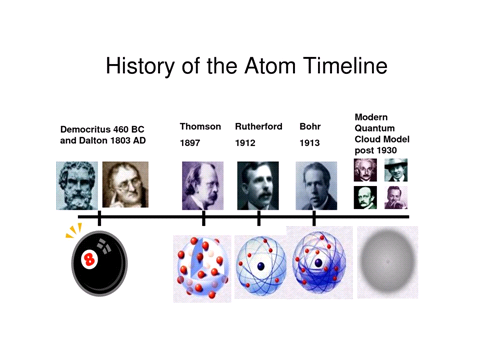 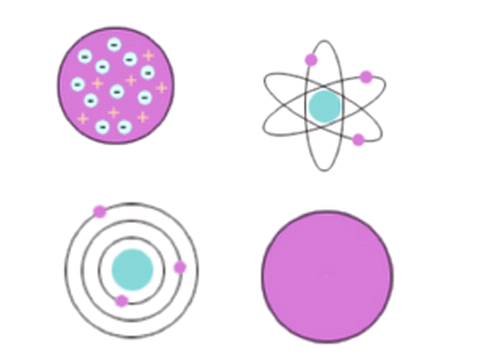 At first, before the discovery of the electron there was Dalton’s model. Here, atoms were thought to be tiny spheres that could not be divided.

The discovery of the electron forced an update in the model. The new model was developed by a scientist called Thomson, but the model itself is often called the plum pudding model.

This model suggested that an atom was a sphere of positive charge with negative electrons embedded within.

After this came the nuclear model, see above.

There are three different types of nuclear radiation that we are interested in:

An 𝞪 particle is made up of two protons and two neutrons. It is a helium nucleus and therefore has no electrons.

A 𝞫 particle is an electron, originating from the nucleus.

𝞬 radiation it a high energy electromagnetic wave. These have really short wavelengths and high frequencies.

𝞪 particles have a range of 3-8cm in air - the shortest of the three.

They cannot penetrate skin or paper and they have the largest ionisation power of +2 (this comes from its charge.

𝞫 particles have a range of 1-5m in air - the second furthest.

They cannot penetrate a sheet of aluminium and they have an ionisation power of -1.

𝞬 radiation can travel infinitely as it is just an electromagnetic wave.

It can be stopped by thick lead and it has an ionisation power of 0.

Beta particles are used to measure the thickness of paper. 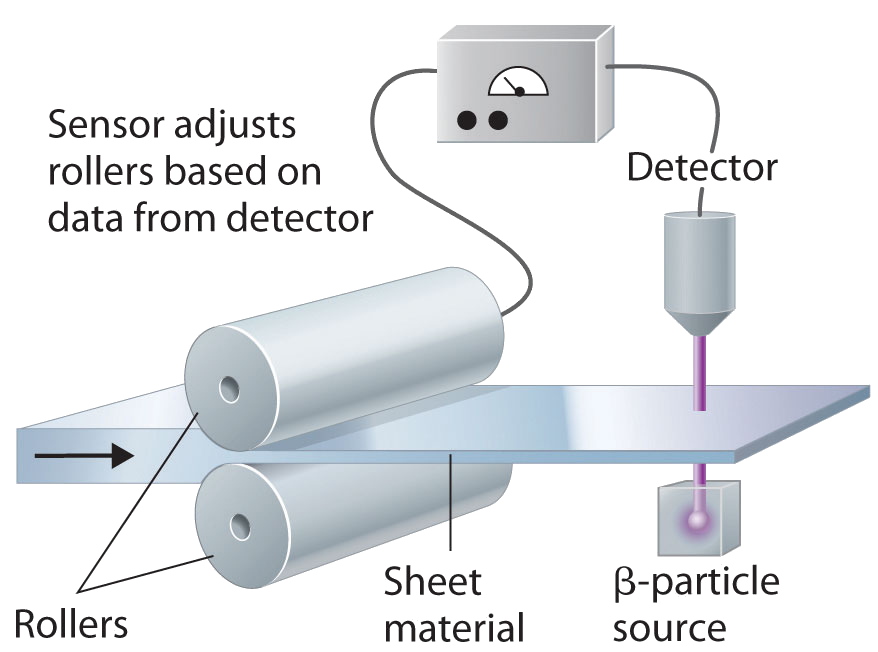 Gamma radiation is used in numerous circumstances. We use it to treat and cure cancer as well as to clean and sterilise medical equipment and food.

We have met the inverse square law a few times from fields. The principle applies to the radiation intensity as well.

It is always extremely important to handle radioactive sources as the consequences can be lethal. Here is a small list of safety precautions that can be taken:

There is radiation that is all around us that can be detected. This occurs even when there is no source in the room. Sources of background radiation can originate from:

The amount should normally be constant but it does vary from location to location. This is because there are some places where there is a larger collection of radioactive gas and rocks in the ground. If there have been nuclear fallouts or tests then the surrounding area will also have a higher background radiation count.

Radioactive decay is an entirely random process. We cannot predict when and which atoms in a radioactive sample are going to decay. We only know that they will decay at some point in the future. We can assign a probability to this and form the relation that:

We can then use this to determine the activity of a sample by having:

A = Activity rate (Bequerel or Bq)

Over a longer period of time, this relationship does not hold and another relationship is used (shown by calculus and not relevant for the course).

No is the original number of nuclei in the sample.

Instead of number of nuclei, we can also do this for activity rate:

We can relate the half-life to the decay constant:

The formula is N = N0e – λ t. Rearranging gives us

T½ is the symbol for the half life. Rearranging the above equation for T½ , so this is when the count rate/number of nuclei is half, we arrive at:

Example A radiographer has calculated that a patient is to be injected with 1 x 1018 atoms of iodine 131 to monitor thyroid activity. The half-life is 8 days. Calculate:

(a) the radioactive decay constant

(b) the initial activity

(d) The total activity after 3 days.

we need to convert the 8 days into seconds.

(c) 24 days is 3 half-lives. Therefore the number atoms remaining undecayed is 1/8 of the original.

Radioactive decay has a number of uses and applications.

Radioisotopes are widely used in medicine

• Gamma radiation from a cobalt-60 source is used to destroy deep-seated cancerous tumours. The gamma rays are concentrated on the tumour.

• Less penetrating beta radiation from phosphorus-32 can be used to treat skin cancer by direct application to the affected area.

• The very penetrating gamma radiation from a Cobalt-60 source can be used to inspect metal for cracks which would be invisible to the naked eye. This technique is widely used to test aircraft components for cracks caused by metal fatigue. A photographic plate is used to show any cracks - the gamma rays will be to penetrate more easily where there is a crack and so it will show up as a darker area on the photographic film.

• Leaks in gas and oil pipelines can be detected by using radioactive ‘tracers’ in the pipeline.

• The thickness of sheet material such as paper, thin metal and plastics can be automatically controlled using a beta emitter and detector. For thicker metals a gamma source would be used. If the sheet thickens the amount of radiation will fall and a signal will be sent to the rollers to move closer together until the radiation level rises to the correct reading.

Carbon-14 dating can be used on material which was living in the last few tens of thousands of years, and which got its carbon from the air. Carbon 14 is a radioactive isotope of carbon. It is produced in the upper atmosphere by radiation from the sun. (Specifically, neutrons hit nitrogen-14 atoms and transmute them to carbon.)

Land plants, such as trees, get their carbon from carbon dioxide in the air. So, some fraction of their carbon is C14. The same is true of any creature that gets its carbon by eating such plants. We can measure this in living things today.

The size of a nuclear radius can be calculated by the following relation:

A = Number of nucleons

To calculate nuclear density, we can use the following relation:

This equation assumes that the nucleus is spherical, there are no gaps between the nucleons and that all nucleons have the same density.

It has been shown that energy and mass are proportional to each other. This can be shown by this, rather famous, relationship: 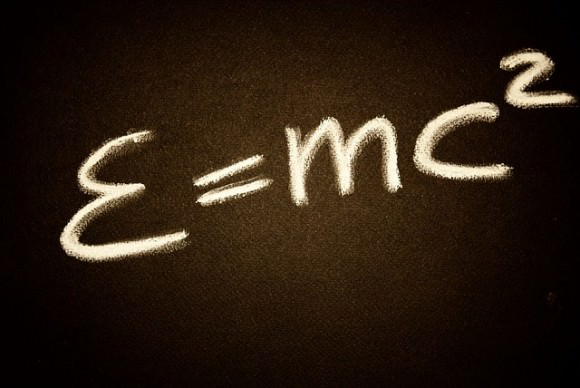 Fission occurs when a nucleus splits into smaller pieces, this process also releases lots of energy. It rarely happens spontaneously and is often induced.

We can induce fission in large nuclei such as uranium-235. The most common isotope of uranium, U-238, does not split easily, but the 235 isotope does. We induce fission by “tickling” the nucleus with a _“thermal” _neutron. A thermal neutron has little kinetic energy and are in thermal equilibrium with the moderator (Graphite). This is done so that the thermal neutrons interact with the fuel and cause fission. The moderator decreases the speed of the neutron via collisions. In a reactor there are control rods (Boron) which absorb the neutrons. The neutron has to have the right kinetic energy:

• Too little kinetic energy means that the neutron will bounce off the nucleus;

The nucleus flies apart into a number of fragments, leaving three neutrons left over. These too are able to tickle other nuclei and make them split. Each neutron spawns two or three more neutrons in each fission, so we get a chain reaction. There is a mass defect in the products of the fission so energy is given out. In an uncontrolled chain reaction, the energy is given out in the form of a violent explosion.

Fusion occurs when two small nuclei fuse or join together to make one larger nucleus. This also gives out a lot of energy, in fact more than fission.

Each nucleus has to have sufficient energy to:

• Overcome electrostatic repulsion from the protons;

This means that the gases have to be heated to a very high temperature, 100 million Kelvin 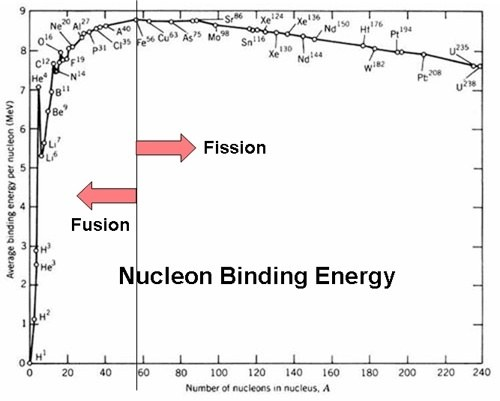 This graph shows the average binding energy along with where fission and fusion takes place. The change is at Iron, at this point more energy is required to be put into the system for fusion to occur and as such does not happen naturally.

The size of a nuclear radius can be calculated by the following relation:

A = Number of nucleons

To calculate nuclear density, we can use the following relation:

This equation assumes that the nucleus is spherical, there are no gaps between the nucleons and that all nucleons have the same density.