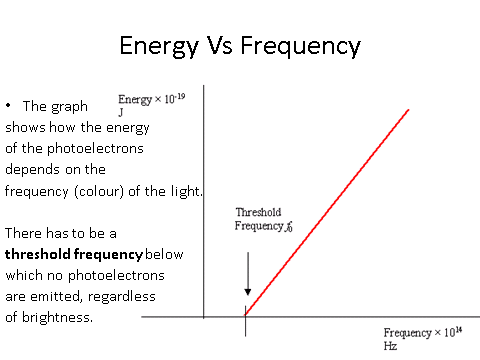 It was discovered in this experiment: 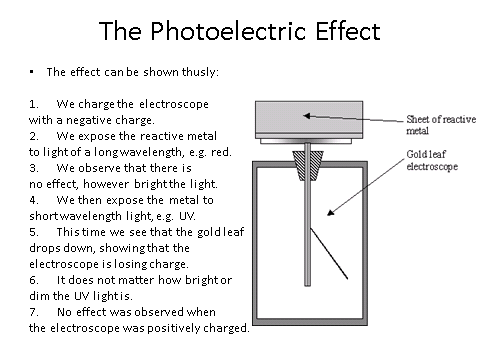 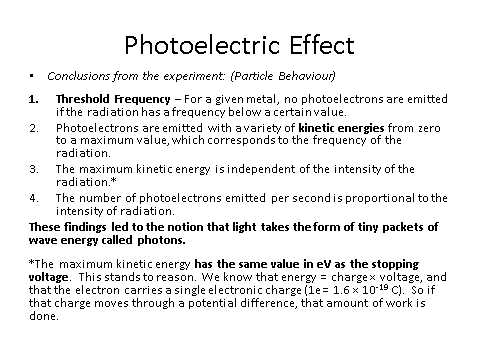 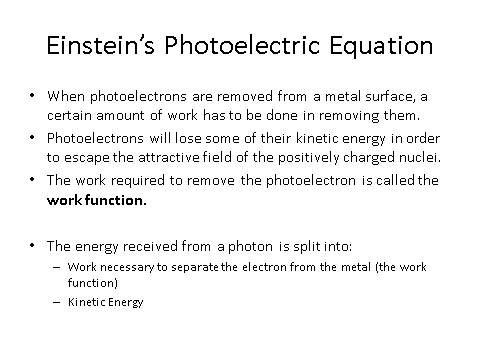 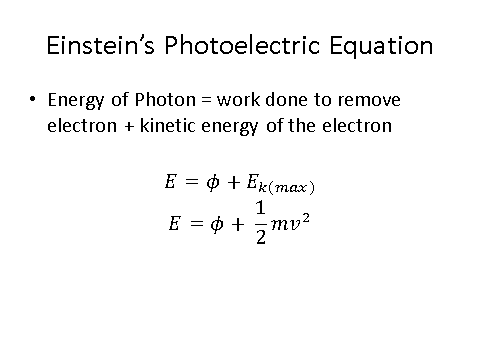 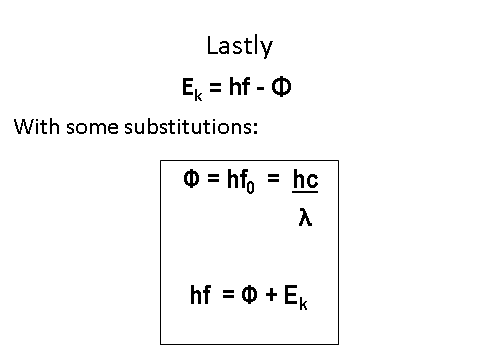 What is the work function?
Your answer should include: Minimum Amount / Energy / Electron / Escape / Surface

Collisions of Electrons with Atoms

Ionisation occurs when an atom gains or loses an electron.

Excitation occurs when an electron gains energy and moves to a higher energy orbital. The electron is now in an excited state.

After a time it de-excites and drops back down to its original energy level. Whilst it does this is releases a photon with an equivalent energy to the energy level difference.

In a fluorescent tube ionisation and excitation takes place.

The tube is filled with mercury vapour or an inert gas at low pressure. When a potential difference it placed across the tube ionisation and excitation of the atoms occur as they collide with each other and with the electrons.

The atoms emit ultraviolet photons as well as visible photons and ones with much less energy.

When they de-excite the ultraviolet photons are absorbed by the atoms of the fluorescent coating causing excitation of the atoms.

The coating atoms de-excite in steps to emit visible photons.

The electron volt (eV) is the amount of energy gained by the charge of a single electron moved across an electric potential difference of one volt. It is equivalent to 1.6x10-19 J. You are required to be able to convert between Joules and electron volts.

As mentioned previously, electrons are contained within energy levels around the nucleus. When they are excited the electrons jump up away from the nucleus and when they de-excite they move back down releasing a photon that has the same energy as the jump.

These levels are discrete and only happen at certain energy values. These differ from atom to atom.

The energy from the photon can be used to calculate the difference in energy levels by the following equation:

Electrons and other exceedingly small particles, like photons, have a property known as wave-particle duality. This means that they can behave as a particle or a wave - circumstance depending.

The photoelectric effect shows that these particles behave as a particle, but electron or EM diffraction whos a wave like nature.

de Broglie came up with a relation to show how the momentum of the particle can alter its wavelength, known as the de Broglie wavelength:

As the momentum of the particle increases the wavelength decreases.