As an organism develops, cells differentiate to form different types of cells.

As a cell differentiates it acquires different sub-cellular structures to enable it to carry out a__ certain function__. It has become a specialised cell.

A scale bar may be used in order to find the magnification of the image:

In order to work out the magnification of the image:

Remember to convert between the different units! You also need to know how to write numbers in the standard form.

Changes in microscope technology, including electron microscopy, have enabled us to see cell structures and organelles with more clarity and detail than in the past and increased our understanding of the role of sub-cellular structures. However, it does not allow us to view living cells.

Light microscopes are used to study living cells. It provides low magnification and resolution, but it is usually sufficient for regular use. 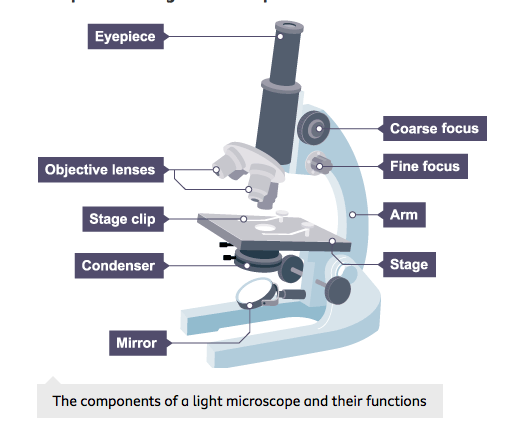 Using the following formula, you can calculate the magnification of an image. 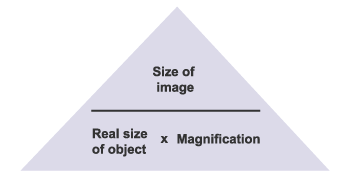 Bacteria multiply by simple cell division (binary fission) as often as once every 20 minutes if they have enough nutrients and a suitable temperature.

Bacteria can be grown in a nutrient broth solution (allows a liquid or gel to provide nutrients that a bacteria needs in order to grow) or as colonies on an agar gel plate.

Uncontaminated cultures (otherwise other contaminating bacteria will try to compete for nutrients) of microorganisms are required for investigating the action of disinfectants and antibiotics.

Aseptic techniques must be used when culturing microorganisms in the laboratory so that there isn’t any bacteria that is trying to compete for nutrients in the petri dish. Harmful pathogens can also damage the results that are being collected.

The cross-sectional areas of colonies or clear areas around colonies can be calculated using the formula:

This can be used so that you can see how effective a specific antibiotic or antiseptic is.

You need to look at the growth inhibition zone (the area outside surrounding the antimicrobial disk. Based on the image below, it is the gray area. To find the radius, measure the diameter, then divide it by 2.

What is binary fission?
Your answer should include: bacteria multiply / cell division
Explanation: When bacteria multiply by simple cell division
What is 40,000 nanometres in micrometres?
40 micrometres
What is the formula to calculate the magnification of an image?
Your answer should include: size of image / real size of object