ADH (antidiuretic hormone) is required in the body as it helps the kidney manage the amount of water in the body. Once again, the hypothalamus detects the blood water content.

If the person is dehydrated, there will be a low concentration of water found in the blood. More ADH will be released from the pituitary gland, allowing the kidney to reabsorb more water. This will mean that there is less water in the urine, and the urine will appear more yellow in colour. This will then lead to a normal level of water in the blood.

On the other hand, if a person has drank a lot of water, they will have a high concentration of water in the blood. Less ADH will be released from the pituitary gland, allowing the kidney to reabsorb less water. This would mean that there would be more water found in the urine - making the urine quite colourless. This will then lead to a normal level of water in the blood.

Adrenalin is a vital hormone which helps us when we feel threatened. Adrenalin is released in short bursts, but when it is released, it increases an individual’s heart rate, blood pressure, blood flow and it raises the blood sugar levels by stimulating the liver to change glycogen into glucose. An increase in glucose is needed during the fight or flight reaction as the glucose helps the muscle contract. When our heart rate increases, there is more oxygen that is sent to the brain and muscles. This allows us to have more energy for our response towards the threat. Blood vessels in the skin and digestive system contracts, and the blood is directed to the brain and muscles. 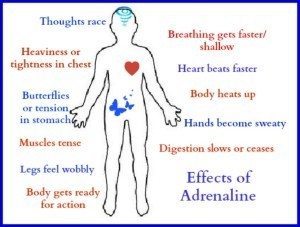 Thyroxine controls metabolic rate as an example of negative feedback. It controls the speed in which oxygen and food products react together so that energy is released for the body. It is vital in growth and development.

When thyroxine levels are normal thyroxine inhibits the release of TRH and the production of TSH.

Plants produce hormones to coordinate and control growth and responses to light (phototropism) and gravity (gravitropism or geotropism). Unequal distributions of auxin cause unequal growth rates in plant roots and shoots. Auxins are found in the tip of stems and roots, but it travels down the shaded side of the plant so that the growth on that side can speed up. If the tips are cut off or covered, then auxin is not produced and phototropism will not take place. 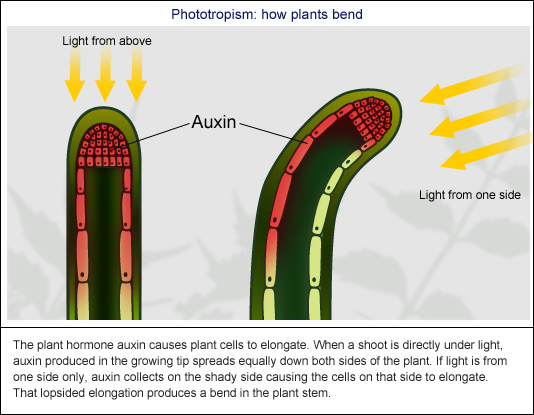 Plant hormones are commonly found in weedkillers and rooting powder. Selective weedkillers can be used to kill certain types of plants that are unwanted (e.g. weeds). Gibberellins are important in initiating seed germination. Gibberellins are used in germination, fruit and flower formation and the production of seedless fruit. This allows plants to be grown all year round.

Ethene controls cell division and ripening of fruits. This is helpful as it would either delay the ripening of the fruit so that it looks fresh for longer. Rooting powder can be used as it makes stem cuttings develop roots quite quickly. Growth hormones will be found in rooting powder.

Plant growth hormones are used in agriculture and horticulture in order to control plant growth.

Gibberellins can be used to: