There are 4 levels of ecological organisation. It starts at the lowest level: individual organisms, then populations, then communities, then finally to the whole ecosystem.

Individual species of living organisms include every single plant and animal species that can be found on our planet. It includes also includes bacteria and fungi.

A population is when you have a specific group of species that can live together in a specific area. For example, you can have a herd of wildebeests living in African Savannah.

Next is the community, where each species depends on other species for food, shelter, pollination, seed dispersal etc. If one species is removed it can affect the whole community. This is called interdependence. A stable community is one where all the species and environmental factors are in balance so that population sizes remain fairly constant.

Finally, the ecosystem is the biological environment that includes all living and non-living things (e.g. air, soil and water) in a specific region, and the interactions that take place between them. To survive and reproduce, organisms require a supply of materials from their surroundings and from the other living organisms there. Plants in a community or habitat often compete with each other for light and space, and for water and mineral ions from the soil. Animals often compete with each other for food, mates and territory. 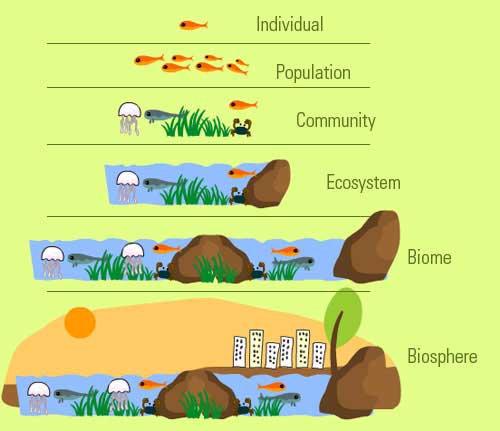 Communities can be affected by abiotic and biotic factors.

Abiotic Factors (Non-living physical factors that can affect living organisms in the community):

Some organisms are adapted to live in their natural environment, making it easier for them to survive. Organisms have features (adaptations) that enable them to survive in the conditions in which they normally live. These adaptations may be structural, behavioural or functional.

Some organisms live in environments that are very extreme, such as at high temperature, pressure, or salt concentration. These organisms are called extremophiles. Bacteria living in deep sea vents are extremophiles.

For example, camels are adapted to live in extremely hot and dry conditions. They have the following adaptations: