Living organisms can be either Eukaryotes or Prokaryotes.

The difference between animal and plant cells.

How to accurately draw and label generic animal and plant cells.

Animal and plant cells are both Eukaryotic cells. 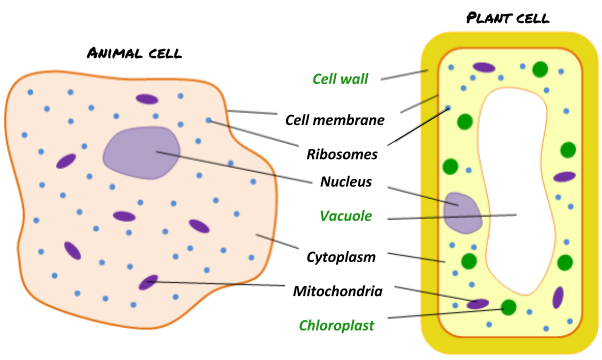 The function of all organelles with animal and plant cells.

An organelle is something that is found within cells. You can think of it as the organs of the cell. The suffix ‘-elle’ usually means small! Here are all the functions of the different organelles in animal and plant cells (you will need to remember them):

Only plant cells contain the organelles in __bold italic__.

Nucleus: Contains the genetic material that tells the cell what to do. (DO NOT say it’s the brain, although you can think of it like that).

Cytoplasm: This is a jelly like substance that contains enzymes. This is where all the chemical reactions happen.

Cell Membrane: This holds the cell together and controls what goes in and out of the cell.

Permanent Vacuole: This contains salt and sugar for the cell (cell sap).

Chloroplasts: Chloroplasts contain a green pigment called chlorophyll (this is what makes leaves green) that absorbs light for photosynthesis. Photosynthesis makes food for the plant cell.

Cell Wall: Cell walls provide structure for the cell, supporting and strengthening the cell. The cell wall is made out of cellulose.

How to accurately draw and label a generic prokaryotic cell

The function of each of the prokaryotic organelles.

The cell wall, cell membrane and cytoplasm all have the same function as they do in the section above. The DNA holds the genetic information of the cell but this is not contained within a nucleus. Instead it floats freely in the cell. Rings of DNA (plasmids) are also contained within the cell.

Explain the difference between Eukaryotic and Prokaryotic organisms.

State the function of each organelle within a generic plant cell.

State which organelles are present in a plant cell that are not found in most animal cells.