Your cells need to be kept at the right conditions in order to work properly. Even if the outside conditions change. For example, if it is very cold outside, your body needs to work to keep the inside of your body warm still! Otherwise your cells wouldn’t work properly.

Homeostasis is the regulation of the conditions within your body and cells to maintain a stable environment. This happens in response to changes in internal and external environments.

Stimulus: This is a change in the environment that you may need to change. I.e light, pain, temperature

Receptors: This is something that detects a stimulus. The receptors send a signal to effectors

Effectors are things that act to counteract the change. This brings the system back to its normal environment.

The process of detecting and change in the environment and counteracting the change is called a negative feedback mechanism.

The detection of a change in the environment that you need to change is called a stimulus. For example, pain can be a stimulus.

Here is an example of temperature regulation: 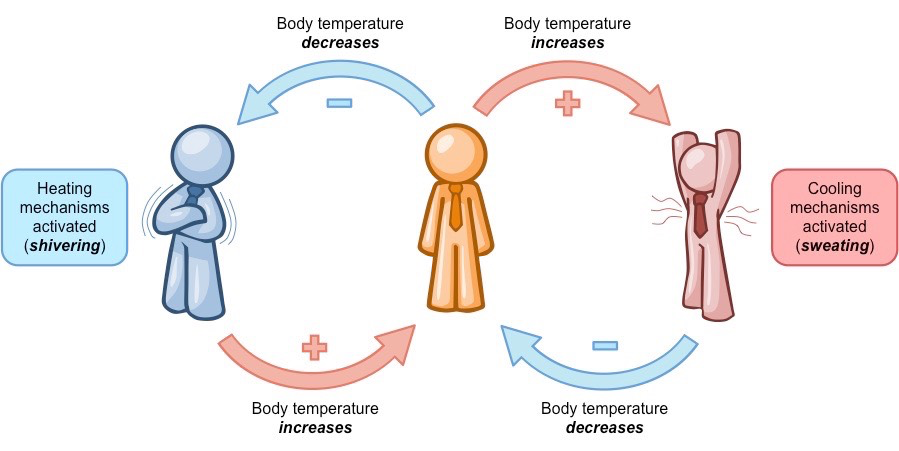 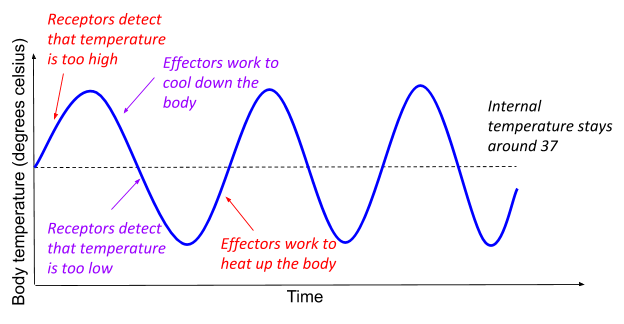 A nervous system allows organisms to react to changes in the environment around them. Without a nervous system, our body wouldn’t be able to communicate with itself (the arm telling the brain that it feels pain, for example).

The nervous system uses neurons (nerve cells) to send information from one part of your body to another. The signals are electrical impulses.

There are three types of neuron, these are the cells that are carrying the signals from one place to another. Think of them as little postmen! There are sensory neurons, relay neurons and motor neurons. 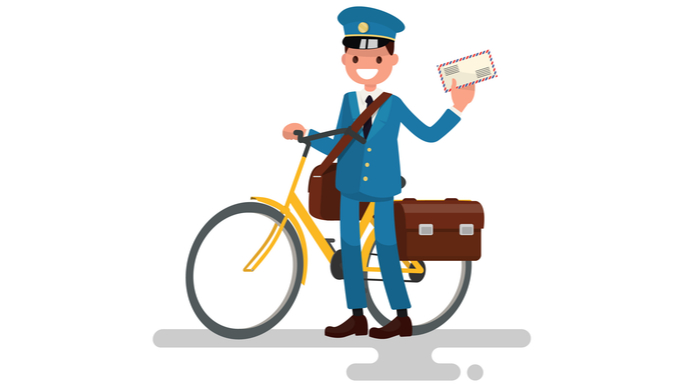 Your central nervous system consists of your brain and spinal cord!

The gap between neurons is called a synapse. Electrical signals pass from one neuron to another through synapses. Chemicals diffuse across the gap, transferring the signal to the next neuron where the signal can carry on its journey.

The electrical impulse is very very fast along the neuron. It takes a longer time for the signal to pass between neurons (but it’s still very fast). Neurons are long so that there is less time spent passing signals from one neuron to another. 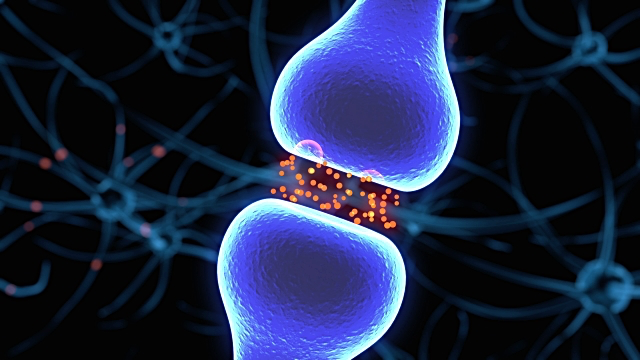 There are certain responses that are automatic, you don’t need to think about them. For example, if you burn your hand on a flame. You don’t think about pulling your hand away, your body does it automatically! This is called a reflex.

A reflex arc is the journey the signal takes from your receptor to the effector when an automatic reaction occurs. 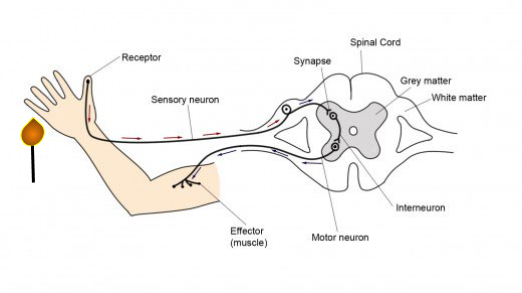 The signal takes exactly the same journey as the previous example, expect this time the signal doesn’t waste time by going to your brain. This makes the response faster, and could mean the difference between life and death!

Reaction time is the amount of time it takes for your brain to receive a signal, analyse the signal and send the signal to an effector.

You can test reaction time by getting someone to drop a ruler between your hands. You need to try and catch the ruler with your finger as fast as you can (without moving the position of your hand).

The reaction time is proportional to how far the ruler had dropped before it was caught.

You can test the effects of caffeine on reaction time by carrying out this experiment before and after a cup of coffee! Be careful with the coffee, don’t drink too much since it can have unpleasant side effects in large doses. Drink the coffee outside of the lab, away from dangerous chemicals. 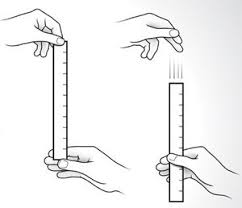 Alcohol is known to increase reaction time. You will not be doing this in class (obviously) but you may get a question on reaction times of drunk drivers!

Cerebral cortex - the outer winkly layer of the brain which is responsible for conscience, memory and intelligence.

__Medulla __- Found at the base of the brain, just above the spinal cord. It is responsible for your unconscious mind (such as breathing).

__Cerebellum __- Found at the back of the brain. Responsible for muscle coordination and movement. 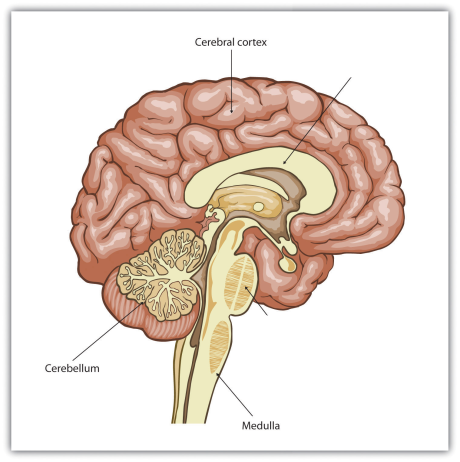 Scientific Study of the brain (HIGHER)

Scientific study of the brain is called neuroscience.

If someone has brain damage, their behaviour can give a big clue as to what part of the brain has been damaged. For example, someone with temporary memory loss would have damaged the cerebral cortex.

The brain can be studied in more detail via MRI scans and electrical stimulation.

MRI scans (magnetic resonance imaging) can produce a detailed picture of the brains structures. Scientists can see what parts of the brain are stimulated when a patient is doing something like listening to music or telling a story. 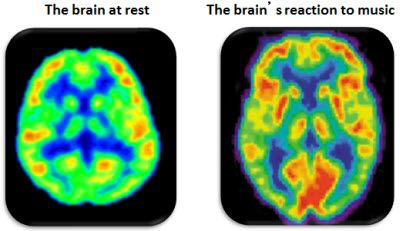 The brain can also be electrically stimulated by giving it a small electrical impulse from electrodes that are put into the skin. This works by seeing what response a certain stimulation has. For example, if the cerebellum is stimulated it will cause muscle contraction. 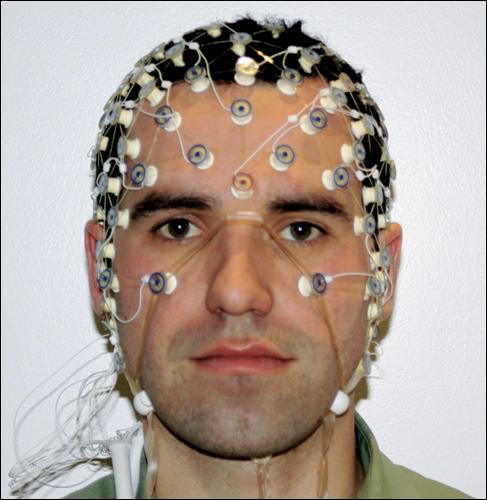 There are advantages and disadvantages to brain treatments:

Electrotherapy can help to reduce tremors in parkinson’s disease. And surgery to remove small parts of the brain can prevent seizures in epileptic people. However, the brain is VERY complex, and we still do not fully understand it. Brain surgery can be extremely dangerous, and electrotherapy can have negative, unforeseen side effects. Severe brain treatments should only be considered in very severe circumstances.