An exothermic reaction is one in which__ energy is released to the environment__. This is often in the form of thermal, light and sometimes sound energy. 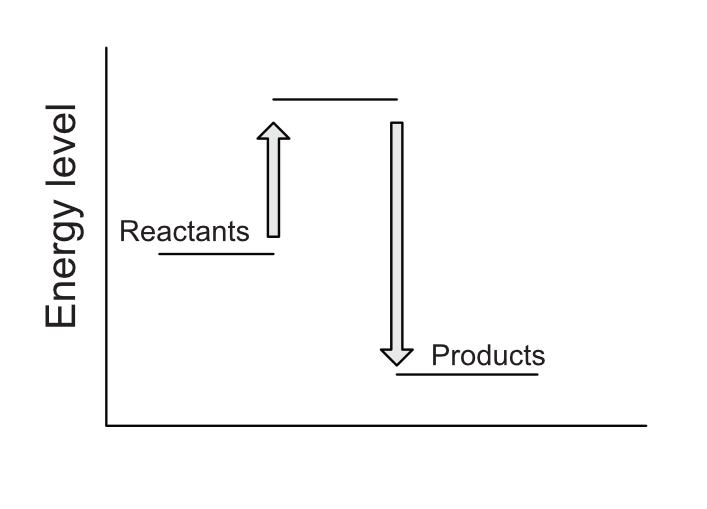 The diagram show difference in the energy levels of the reactants compared to the products. The difference is the amount of energy released to the environment.

Exothermic reactions results in an increase in the temperature of the surrounds and/or the emission of light or sound.

All reactions whether they are endothermic or exothermic have to take in some energy from the surroundings to break the bonds of the reactants for the reaction to start. This initial energy is known as the activation energy. If the energy supplied is less than this activation energy the reaction will not start.

In an endothermic reaction, no surplus energy is released from the reaction, therefore, for the reaction to continue energy must be continually supplied from the surroundings. If this is not supplied the reaction will stop. Photosynthesis, for example, will only occur as long as there is a light source of a high enough intensity to drive the reaction.

Endotheric reactions are chemical reactions that __take in energy __from their surrounds.

When a reaction takes place the existing bonds between the elements that make up the reactants have to be broken, some energy is also required to overcome the intermolecular forces that hold structures together. This requires energy to be supplied from the surroundings normally in the form of thermal (heat) energy. As the new products are formed the new bonds have a certain energy level. If the new energy level of the bonds in the products is greater than the original energy stored in the bonds of the reactants the reaction is endothermic. 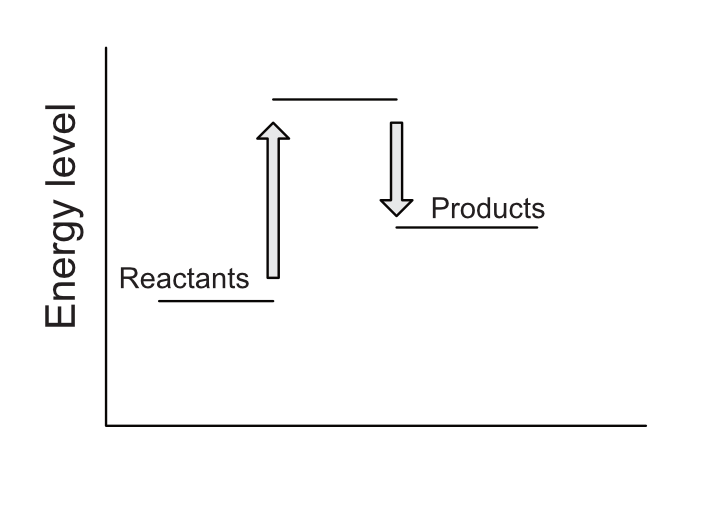 Endothermic reaction result in a drop in temperature of the surroundings.

Each type of bond between different atoms requires a specific amount of energy to break, this same energy is released when the bond forms.

When two hydrogen atoms bond to form a molecules of hydrogen, H2 it released 432 KJ per mol. To break this bond 432 KJ / mol must be supplied.

Energy supplied to the reactants: 494 KJ/mol to break the O=O bond.

This means that the products have 276 KJ/mol less energy than the products. This is the amount of energy released to the environment. As energy is released this is an exothermic reaction.

Reduction of copper oxide by heating.

The reaction needs to take in 192 KJ/ mol from the surroundings, it is an endothermic reaction.