Chemical formulae are used to represent the structural composition of materials, whether they are atoms, simple molecules or compounds. 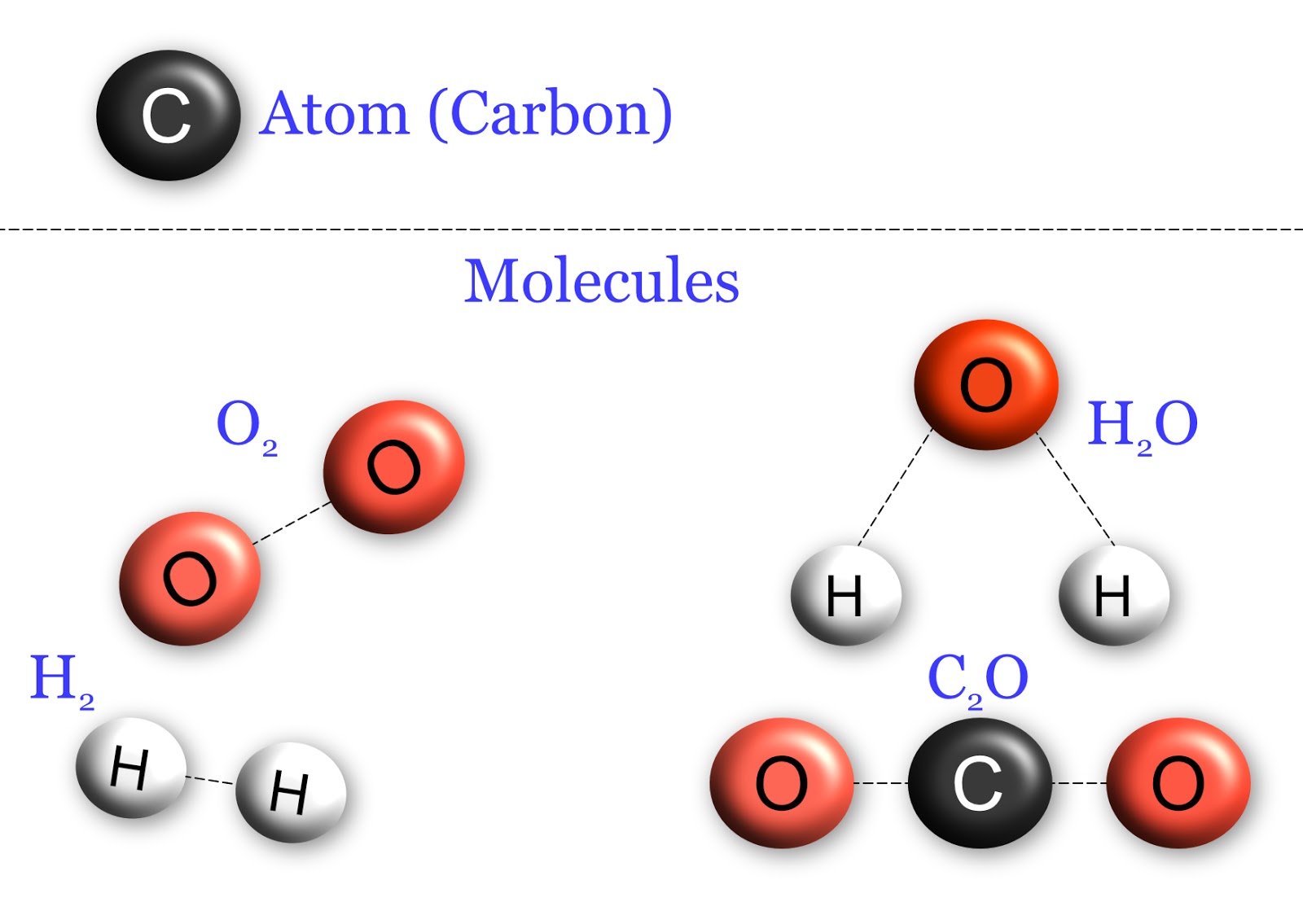 A subscripted number indicats the number of that atom in the molecule, e.g H2.

A number before a molecular symbol indicates the total number of that molecule; e.g 2H2O 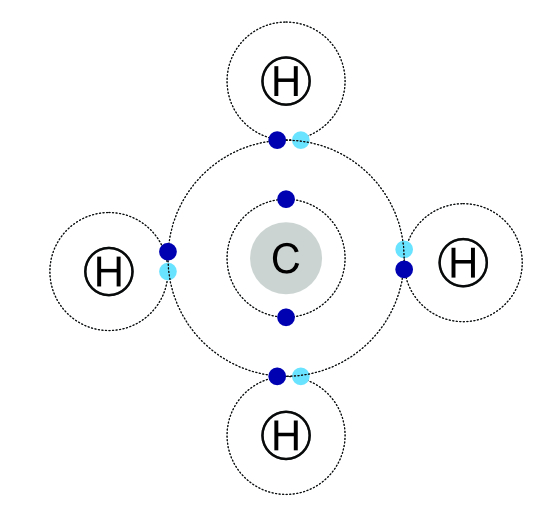 This molecule of methane is an example of a compound as it contains carbon and hydrogen bonded together.

There is 1 carbon atom and 4 hydrogen atoms so it has the chemical formula, CH4.

Here there are two molecules of methane, this is written as 2CH4.

Note when there is only 1 molecule of a chemical the “1” is not written.

Chemical equations represent the changes that take place in the arrangement of atoms during a chemical reaction.

The general format is:

Using the following symbols to represent changes in state or solution.

↑X(g): Gas given off in an experiment - eg ↑H2(g) hydrogen given off as a product in a reaction.

Calcium chloride has the formula CaCl2 because Calcium has 2 electrons in its outer orbit, but each chlorine can only accept a single electron as it already has 7 electrons in the outer orbit. Therefore, each calcium must bond with 2 chlorines to lose both spare electrons.

Note that there are the same number of each type of atom before and after the reaction.

The equation can be read as: “One atom of magnesium reacts with two molecules of hydrochloric acid to make 1 molecule of magnesium chloride and one molecule of hydrogen gas that is given off in the reaction”.

Half equations for this reaction

One mole of any chemical contains the same number of atoms/molecules, this number is known as Avogadro’s constant. One mole of a material contains 6.022x 1023 particles.

In practice, if a sample of a material has a mass equal to its relative atomic / molecular mass the sample contains 6.022 x 1023particles or 1 mole of the material.

Water has the formula H2O, using the periodic table the relative atomic mass of hydrogen is 1 and oxygen is 16. The relative molecular mass of water is (2xH plus O 2x1 +16) 18.

Therefore, the molar mass of water is 18g.

Using Avogadro’s constant and knowing that one mole of a material contains an exact number of particles, the individual mass of an atom or molecule can be calculated.

During many chemical reactions, gases are given off. These can be collected and tested to determine which gas has been produced.

The sample of gas is collected in an ignition tube and held upside down to prevent the gas from escaping. A wooden splint is lite away from the tube and the flame is blown out so that the wood has some remaining glowing embers. This is placed into the tube if the tube contains oxygen the splint will relight.

The sample of gas is collected in an ignition tube and held upside down to prevent the gas escaping, a light splint is held at the opening to the tube. If the tube contains hydrogen the gas will ignite and create a “popping” sound.

The gas is bubbled through a container of lime water. If the gas is carbon dioxide the lime water will turn milky.

Place a piece of damp blue litmus paper into the container of gas. The paper will turn red then be bleached white. Chlorine gas also has a distinctive greenish colour.

A solution contains a solute chemical dissolved into a solvent. The more of the solute in the solvent the more concentrated the solution is. Concentration is measured in moles per decimeter, mol/dm^3. A decimeter is equal to 1 litre or 1000 cm^3 of solvent.

Concentration of a solution (mol/dm3) = moles of solute / volume of solvent (dm^3).

1 mol (1M) of salt solution contains 1 mole of NaCl dissolved into 1 dm3 of water. This can be made by dissolving 58.5g of NaCl into 1 litre of water to give a 1 molar solution of salt water (saline).

159.5g of copper sulfate is dissolved in 500 cm3 of distilled water, what is the concentration of the resulting solution?

How much potassium chloride would have to be dissolved into 250 cm^3 of water to make a 2 M solution?

Stoichiometry uses the law of conservation of mass in reactions to calculate the masses of chemicals taking part in reactions.

If 12g of carbon are full reacted with the oxygen how much carbon dioxide is produced?

Therefore 44g of CO2 must also be produced and this is the molar mass of CO2.

The masses of materials used and produced can be used to deduce the balanced equations of a reaction.

10g of sodium are reacted with an excess of chlorine gas to produce 25.39g of sodium chloride, what is the balanced equations for this reaction?

Formula for the reactants Na Cl

Divide by by the smallest value

Reactants side of the equation 2Na + Cl2