Metal elements have either 1,2 or 3 electrons in their outer electron orbits. This means that when they react they tend to lose electrons to form ionic compounds. Metal ions are positively charged as they lose negative electrons.

Some metals give up their electrons more readily than others and are, therefore, more reactive. Metals can be ranked according to their level of reactivity to form the metal reactivity series.

Metals readily react with water and dilute acids, during these reactions hydrogen gas is given off. By comparing the rate at which each metal reacts with water and/or a dilute acid the metals can be placed in order to form the reactivity series.

Metals at the top of the series tend to form ions more rapidly than those at the bottom. Gold, for example, can be found in nature as gold metal in rocks as it does not react readily. Others like copper etc. are found as copper ore, copper compounds. These have to undergo chemical processes to extract the pure metal from the ore. 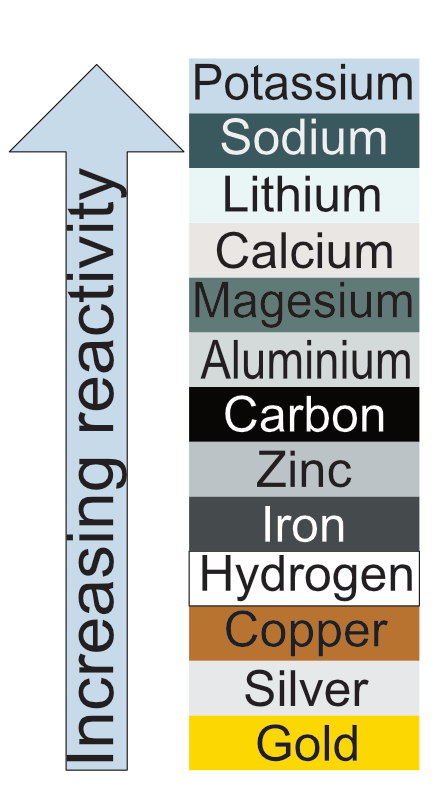 The non-metal elements hydrogen and carbon have been included in the reactivity series as they are often used with metals in experiments and they are also used to help extract metals from their naturally occurring metal ores.

Due to the relative reactivity of metals, given in the reactivity series, when combined they compete to form ionic compounds with other chemicals. More reactive metals will displace (push out) less reactive metals from metal salt compounds. This results in a new salt being formed and the weaker metal coming out of solution and being deposited as a metal precipitate.

The thermite reaction is a very old process that results in the creation of molten iron and was used in the industrial revolution to produce molten iron to weld railway lines together. It is still used for welding in remote areas of the world as it can be achieved with a combination of three powered that are easy to transport.

The thermite mixture contains iron oxide and aluminium powder. These are mixed with an ignition power that provides the initial heat to provide the activation energy for the reaction. 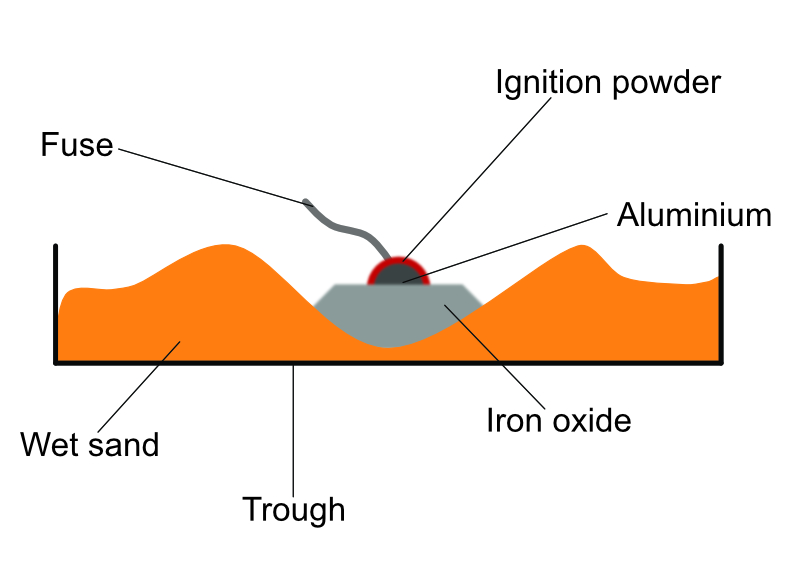 A fuse is used to ignite the reaction, it is a violent reaction creating a bright flash and a great deal of heat. The result is a ball of white hot molten iron. The aluminium is more reactive than the iron and displaces it to form aluminium oxide, leaving the iron as a pure metal.