The current atmosphere consists of,

The Earth’s atmosphere has not always had this composition, it has changed gradually over time.

The Earth formed about 4.5 billion years ago and started to cool, this early Earth was volcanically very active. This suggests that the atmosphere probably contained many of the gases that are emitted from modern day volcanoes when they erupt. This would produce an atmosphere with high concentrations of carbon dioxide, water vapour, ammonia, methane and sulphur dioxide. Analysis of very early rocks show that they have a high concentration of iron compounds. These normally breakdown in the presence of oxygen giving evidence that the early atmosphere had a low oxygen concentration.

Around 3 billion years ago the Earth had cooled enough for the water vapour to start to condense and form the oceans. This provided a “sink” for some of the carbon dioxide which dissolved into the oceans as they formed reducing the amount of CO2 in the atmosphere. This process still occurs today, this provides evidence that it must have happened on the early Earth as well. The Earth was also becoming less volcanic as it cooled and so less CO2 etc was being added from this source.

The first green plants started to photosynthesis around 2 billion years ago, this lead to a reduction in the CO2 and an increase in the oxygen levels. With the increase in plants and animals a balance was eventually reached between respiration and photosynthesis leading to the stable levels of CO2and O2 that have existed for at least a billion years.

The presence of large amounts of fossil fuels containing carbon suggests that during this time of fossil formation carbon dioxide was being removed from the atmosphere and locked away in the fossil remains. Modern humans have started to reverse this process by burning these fossil fuels in ever increasing amounts.

The greenhouse effect is an important and natural process that retains heat from the sun in the Earth’s atmosphere and maintains an average temperature that helps sustain life on Earth. Without this affect the Earth would cool to the temperature of space and life on Earth would end. The greenhouse effect should not be confused with Global Warming which is the result of an excess of CO2 in the atmosphere caused by the the burning of fossil fuels and the addition of methane from processes including the rearing of animals for food production on a large scale. 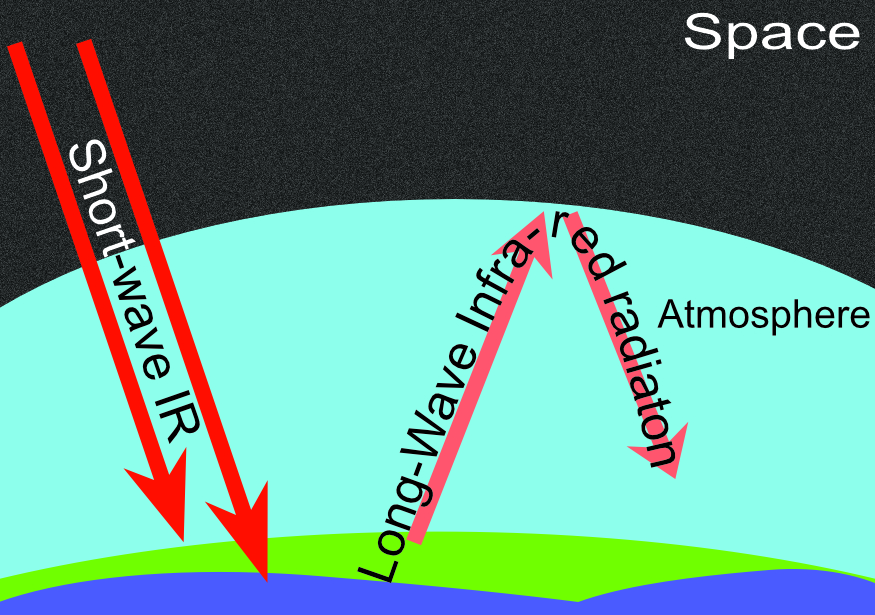 The infra-red radiation from the sun is of a high energy and is shortwave radiation, this penetrates the atmosphere and reaches the Earth’s surface. The energy is absorbed and this heats the ground and the oceans. These in turn re-radiate infra-red radiation, but because this is much colder than the surface of the sun the radiation is long-wave radiation. This lower energy radiation is reflected back into the atmosphere by the CO2 and the methane in the upper atmosphere. This process slows down the escape of the heat to space, keeping the planet warm. The CO2 and the methane act like a blank or coat around the Earth.

Since the industrial revolution in the 17th Century the amount of coal, oil and gas burnt has dramatically increased. This is because of the rise in industrial processes, greater mass transport of people and goods and the increasing demand for affordable electricity across the globe. All of these have resulted in the release of carbon dioxide that was removed from the atmosphere over 650 million years ago. This increase in CO2 in the atmosphere is resulting in more heat energy being trapped in the atmosphere for longer. In addition to the increase in carbon dioxide, methane released from cattle has significantly increased during the course of the last 100 years as people’s demand for red meat and dairy products has increased.

The change in average global temperatures has been linked to many changes in the long term weather patterns (the climate) of all regions of the world.

To mitigate these changes to the world’s climate there will need to be a reduction in the use of fossil fuels and a move to renewable sources that do not generate as much CO2. The demand for meat as major part of the diet is also being questioned. Raising cattle, pigs and chickens on an industrial scale is responsible for a significant amount of CO2, and methane.

Using Ultra-violet light from the sun to kill pathogens. This can be done in warm sunny climates, it is also cheap as it does not require the purchasing of chlorine. It can be used in remote areas where it would be impracticable to supply chlorine.

Desalination of sea water to remove the salts is used in many areas with limited rainfall, but with access to the sea. These areas are normally very sunny and the sun can be used to help evaporate the water and separate it from the salt.

The release of CO2, from burning fossil fuels is not the only form of air pollution. Coal also releases sulfur dioxide and nitric oxides into the air. When these dissolve into the water vapour in the atmosphere they form sulfuric and nitric acid. This lowers the average pH of the rain, snow and mists that form, causing acid rain. This rain can kill trees and when it enters rivers and lakes it can kill the aquatic life, eventually killing the fish and mammals that form part of these ecosystems.

Carbon monoxide is released from the exhaust of car, vans and lorries. They also release small particles of soot and unburnt hydrocarbons. These can build up especially in busy urban areas and have a significant effect on people’s breathing. They can be especially problematic for any one with a weakened respiratory system, including suffers of athama. Many countries have placed limits on the number of vehicles entering busy cities. Most countries have started to place limits on the emission from vehicles and these are tested annually to ensure the vehicle meets minimum standards. In the UK these tests are part the annual MOT test that all vehicles over 3 years old have to pass.