The subatomic particles of an atom.

The relative charge and mass of each subatomic particle.

All matter is made of atoms. Scientists use to think that atoms are the smallest things in existence, but now they know otherwise.

Atoms are very small particles made up of a electrons orbiting a nucleus. The nucleus is made out of protons and neutrons. 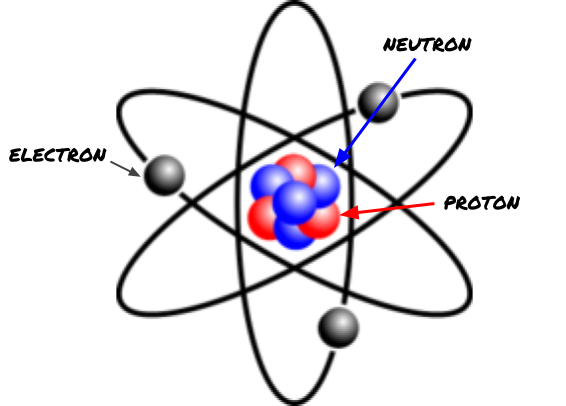 Protons, Neutrons and Electrons are called subatomic particles. ‘Subatomic’ means ‘inside the atom’.

It is VERY important to remember the relative masses and __charges __for each subatomic particle. So you should find this table very useful

__NOTE: __These masses and charges are relative to an atom of Carbon. This is because the actual mass and charge of an atom are VERY small, so we say how big they are compared to something else that is very small. More on this in the Isotopes section.

All atoms have the same amount of protons and electrons (so if there are 5 protons in the nucleus, there will be 5 electrons orbiting). This means that the charge cancels out so that an atom has 0 overall charge.

What is the overall relative charge and mass of the atom shown in the picture above?

What an element is.

The difference between different elements.

If a substance only contains one type of atom, then it is called an element.

Scientists like to use a shorthand way to save time when talking about elements; for example, instead of writing ‘Helium’, scientists write ‘He’. These are called Nuclear symbols.

Here is the nuclear symbol for Carbon: 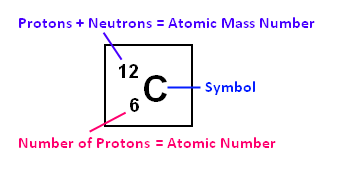 Don’t let the numbers confuse you, they are just telling you how many electrons, protons and neutrons there are in an atom of Carbon.

This number tells you how many protons + neutrons there in an atom. This is always the biggest of the two numbers (unless they are the same). This can be remembered by ‘The MASS number is MASSive.’

This tells you how many protons there are in an atom. (Remember, for just a normal atom, there are the same amount of protons as there are electrons).

How many protons, neutrons and electrons are there in an atom of Carbon?

6 electrons (atoms have the same amount of electrons and protons)

What an isotope is.

How to find the ‘relative atomic mass’ of an element.

Many elements have more than one stable isotope (meaning they don’t fall apart), for example, Boron can exist as B-11 or B-10 - this means that Boron can have have a relative mass of 10 or a mass of 11.

You will be asked to find the relative atomic mass of isotopes. The equation below can be used (this is just a fancy-pants average):

Note: ‘abundance’ is a scientific way of saying ‘amount’.

Let’s say we had collected all the Boron in the UNIVERSE, and 20% of it is B-10 and 80% of it is B-11. We can’t put two numbers for mass on the periodic table, sow we need to find an average mass. Since it is not split 50% 50%, we need to put it into a more complicated equation. Here is how to find the relative atomic mass of the Boron:

Note: The answer is ALWAYS somewhere between the mass numbers of the isotopes.