What paper chromatography is.

What equipment is involved in this.

What is paper chromatography?

Chromatography is one way in which we can determine what there is in a mixture of liquid (such as ink). You may have seen paper chromatography being done in your classroom to separate different dyes in ink. 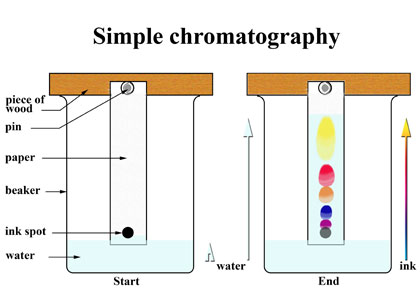 This is how the experiment is set up.

How to carry out paper chromatography.

How to analyse the results of paper chromatography

How to carry out the experiment:

If you are separating two different kinds of ink, you should see something that looks like this: 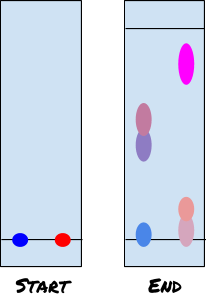 NOTE: The highest point the water reaches is called the solvent front.

NOTE: Lots of different solvents can be used instead of water, it really depends on the type of ink you are using.

On most chromatograms, the number of spots at the end of the experiment usually shows how many dyes were in the ink dot. Although, sometimes there may be more than one type of dye in a spot. So remember, there are at least as many substances in a mixture as there are spots on the chromatogram.

What evaporation is and how it is used to separate substances.

What filtration is and how it is used to separate substances

How to separate soluble and insoluble solids from a liquid.

Here is how to separate soluble and insoluble solids from a liquid:

Separating insoluble solids from a liquid.

This simply done by using filter paper, a filter funnel and a beaker (to catch the liquid)! Here is an example of how the equipment would look… 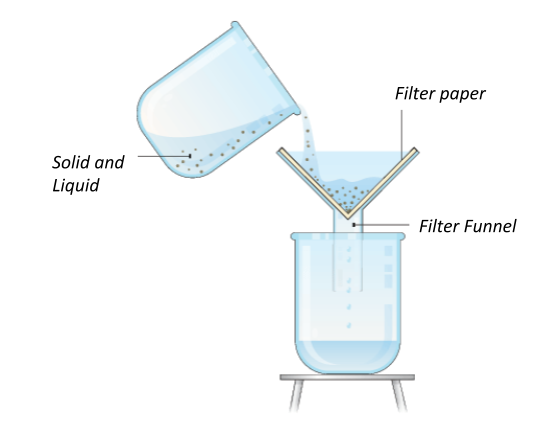 Separating soluble solids from a liquid. Evaporation is when you heat a liquid up enough that it turns into a gas.

Here is an example of separating salt from salt water… 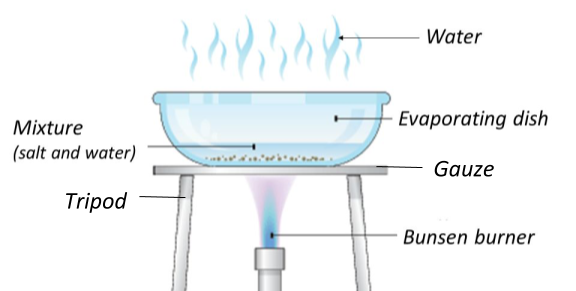 Here is how to evaporate a solid from a liquid:

__Here is how to crystallise soluble solids from a liquid: __

What distillation is and how it works in the lab.

How a condenser works and how to draw/label one.

Separating liquids from other liquids

Distillation may look very complicated at first, but it is just three simple concepts combined.

Here are the three concepts you’ll need to understand before understanding distillation: 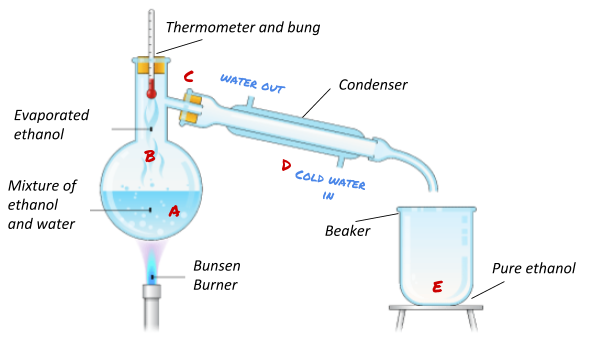 Here is how distillation works, step by step:

Here is a closer look at the condenser.

The condenser is made out of a glass tube surrounded by another glass tube. The outer tube has cold water running through it. This outer tube cools the inner tube, allowing the vapour in the inner tube to cool into a liquid. Cold water enters the bottom since the warm vapour will slightly heat up the cool water. There needs to be a temperature gradient in order to efficiently cool down the vapour.