Alcohols are a group of compounds that have a hydrocarbon chain attached to an -O-H group. The general formula for an alcohol is

Yeast turns sugar into carbon dioxide and ethanol. This is one of the main ways that ethanol is produced industrially. This is called fermentation.

In lots of alcoholic drinks, the alcohol isn’t added but it’s made in the liquid by adding yeast. The yeast turns the sugar into carbon dioxide gas and ethanol!

Carboxylic acids have a -COOH group added to the hydrocarbon chain. These are named the same way as alkanes and alkenes, except we write ‘-anoic acid’ at the end instead of -ene or -ane.

Esters are formed when an alcohol reacts with a carboxylic acid. 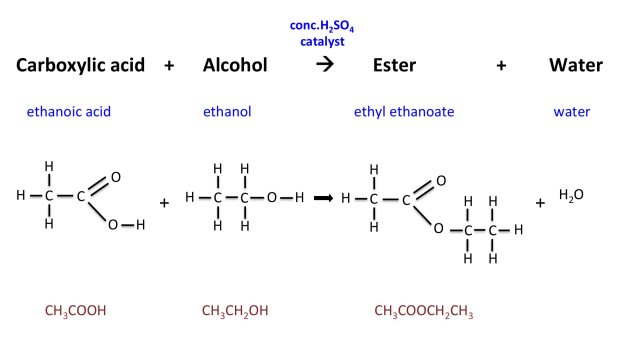