Public expenditure includes spending by central government (on things like defence, the National Health Service and welfare benefits) and spending by local authorities who provide things such as refuse collection, libraries, and social services).

___Government capital expenditure ___refers to spending on fixed assets such as schools, roads, hospitals or aircraft for the air force that are expected to provide a use over many years (minimum of 1 year).

___Government current expenditure ___refers to spending on goods and services that are used up (consumed) in less than a year. It includes the salaries of public sector workers such as nurses and teachers, medicines for the health service and running costs like heat and light for hospitals and schools.

Note that current expenditure also includes spending on transfer payments. This comprises the main welfare benefits (called ‘social protection’ in government accounts)such as the state pension, and benefits for disabled people and those on low incomes. Transfer payments are excluded from GDP because they are not part of national income; they are not payments for the output of goods or services. As the name suggests they are a redistribution of income, from taxpayers in general to the recipients of the benefits. They are the single biggest component of public expenditure (approx 30%). 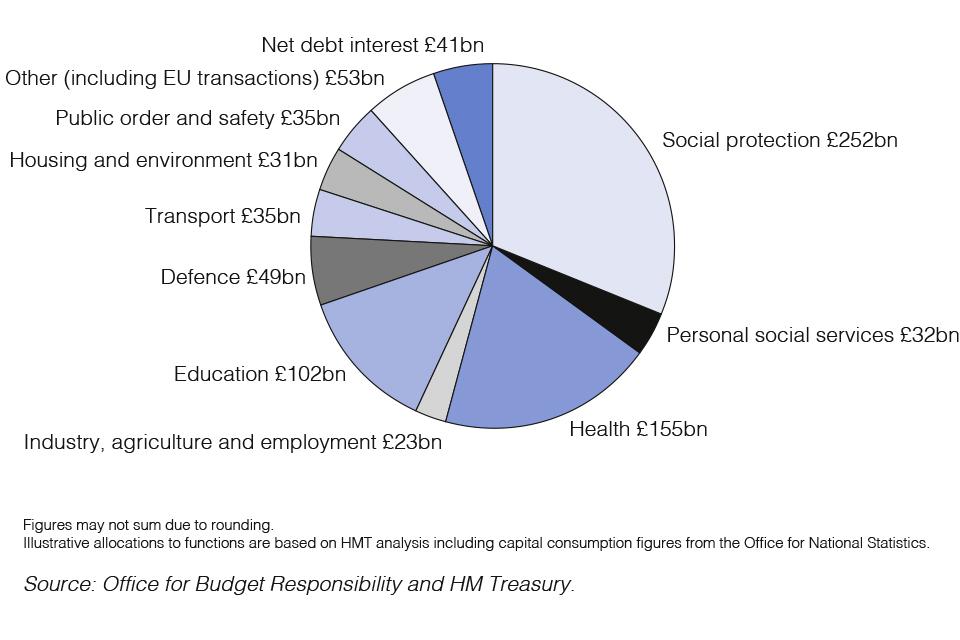 The Impact of Changing Levels of Public Spending

A change in public spending as a proportion of GDP can have significant consequences, as follows:

Productivity and growth – Free market economists believe low public spending is better for growth and productivity because it allows taxes to be low and therefore improve incentives for workers and entrepreneurs. It is also argued that a lot of public spending is wasteful; private businesses have a stronger incentive to use resources more efficiently (to increase profits).

Other economists argue that higher levels of public spending can increase growth and productivity:

Living standards and distribution of income – Government spending can have a major impact on raising the incomes of the poorest in society, who may depend largely on state benefits for their income. Access to good healthcare and education would also be beyond many families if left to private provision alone. The same is true of housing; ‘social housing’ provided by the government at affordable rents gives families on low incomes access to decent housing. Government spending also raises living standards for the whole society by providing public goods, such as street lighting, defence and law and order.

But some public spending may benefit richer people more than poorer people. Examples include subsidies to the railways in the UK, which are mainly used by wealthier people. In some developing countries subsidies for fuel benefit mostly city dwellers (rural communities may not have electricity).

_Taxation _– Higher public spending has to be paid for, which means higher taxes in the long term. There are a few exceptions to this; in some oil rich countries where the oil is state owned, export revenues can be used to finance public services rather than raising taxes. But there is still an opportunity cost; - the oil revenues could be distributed to people to spend as they wish.

Crowding out – Free market economists argue that more public spending is likely to reduce private spending. This is called crowding out. If the economy is at full employment (ie operating on its production possibility frontier, it must mean that, at least in the short run, there is a corresponding reduction in private spending. The state is appropriating more of the economy’s resources and restricting people’s freedom to allocate resources through their spending choices.

Crowding out can also happen when the economy is not at full employment. If the government finances more spending by borrowing, this will drive up interest rates, which will deter investment spending by businesses. Free market economists believe that private sector investment is usually a more efficient use of resources.

Higher public spending does not always result in crowding out:

Discuss the possible impact on the economy of an increase in public expenditure
Your answer should include: current expenditure / capital expenditure / transfer / payments / national debt / debt interest / productivity / growth / living standards / distribution of income / crowding out

Reasons for the Changing Size and Composition of Public Expenditure

The amount of public spending, and how it is spent varies both between countries and within a country over a period of time. The main factors determining the size and composition are as follows:

_Level of income and development __– _High income, developed economies tend to have higher levels of public spending, both in absolute terms (the actual amount spent) and as a proportion of GDP, compared to poorer countries. As a country becomes more developed and living standards rise, people have a higher expectation of public services, such as healthcare and education, so governments are under pressure to spend more on these services. Developed countries also have a much bigger tax base (more people earning more money). In poorer countries many people live and work in the informal economy, which often does not involve recorded earnings or spending, so cannot easily be taxed.

_Political factors__ – _Amongst countries with similar levels of income and development there may be considerable variation in the proportion of GDP taken by public spending. This reflects, to some extent the political and economic preferences of the population. The USA has a more free market economy than countries in northern Europe. Public spending is 36% of GDP in the USA, compared to 57% in Finland (in the UK it is 42%). There is far less support amongst voters in the USA for publicly funded healthcare and welfare benefits than in northern Europe, for instance.

_Demographic factors__ – _The aging population in many countries (mainly the result of higher development) is starting to put more pressure on governments to increase public spending, especially on healthcare, social care and pensions.

_The economic cycle__ – _The global recession following the financial crisis in 2007/8 caused big increases in public spending in many countries, both to support the banking system and as a demand side policy to prevent a bigger fall in GDP. But the longer term consequence has been a major fall in public spending (‘austerity’) in many of those countries; because of concerns over the consequential increase in their national debts spending has gone down and taxes have risen.