Economic growth does not proceed at an even rate over time. There are periods when GDP grows faster than its long term trend rate, whilst at other times it grows below the trend rate, or even falls (i.e. negative growth).

There tends to be a pattern to the way the economic growth fluctuates over time, consisting of a cycle of four stages. These are known as the trade cycle (also called the business cycle or__ economic cycle__).

The trade cycle is illustrated in Fig 1 below: 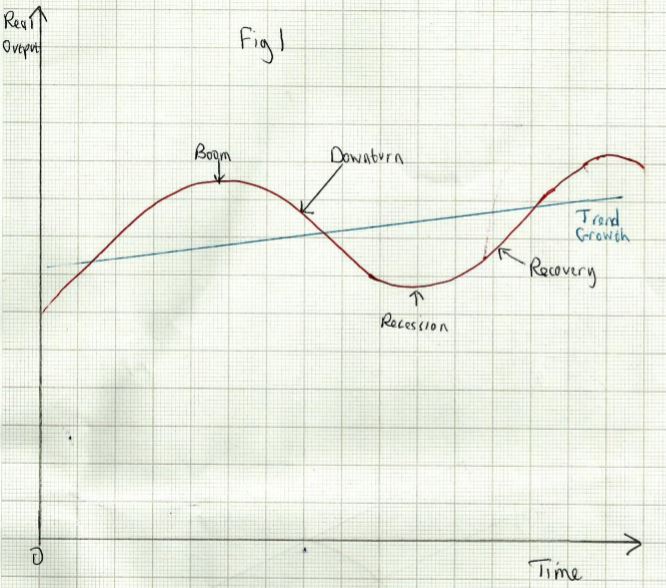 No two trade cycles are exactly alike, and the four stages above do not always happen in exactly the way described. Fig 1 shows a very strong cyclical upswing and then downswing, with very large output gaps in the boom and recession stages.

Many cycles are much shallower, with only mild fluctuations in output. Sometimes there is no actual fall in output, just a slowdown in the rate of growth, before it returns to the trend rate or just above. Since the second world war, governments have generally accepted an obligation to try to reduce the severity of the trade cycle by active demand management policies, but they don’t always succeed (the recession after the banking crisis in 2007/8 was particularly severe).

A Recession is generally defined as two successive quarters (ie six months) in which GDP growth has been negative (ie falling).

Causes of the Trade Cycle

Demand side shocks include:

Supply side shocks include: