The Circular Flow of Income

The income of a country can be calculated by adding up any of the following:

Income, output and expenditure are all __flows __(they occur at a certain rate over a period of time).

They all measure the same thing, but at different points in what economists call the circular flow of income. This is shown in a simplified model of the economy in Fig 1 below: 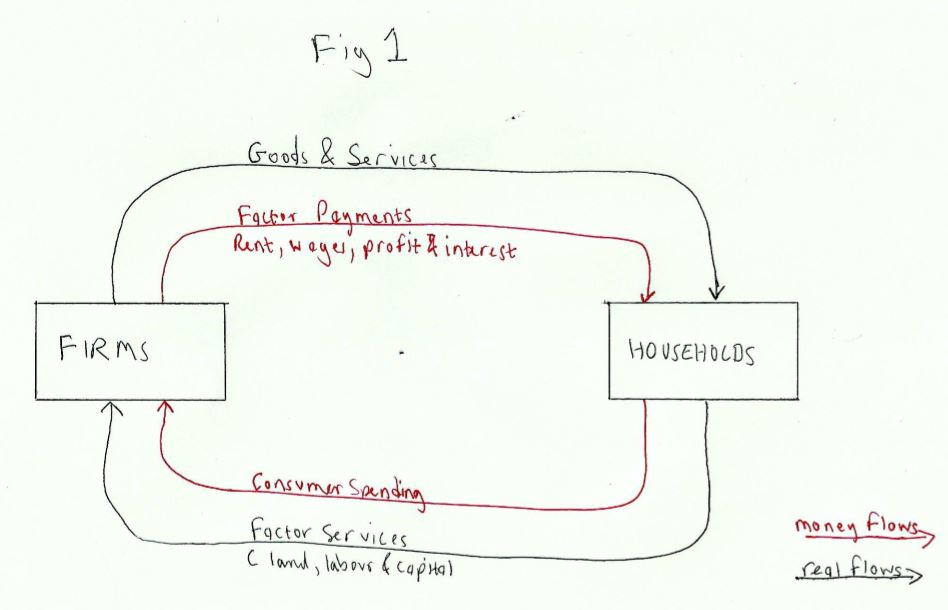 The black lines on the diagram show the __real economy __(the production and consumption of goods and services).

The red lines show the __money economy __(the flows of payments for factor services by firms, and consumer spending on goods and services by households.

Let us suppose that a country’s income is £100m per year. This would mean that the total of consumer spending is £100m, because we have assumed households do not save. The £100m therefore passes to firms in exchange for goods and services produced. It therefore follows that the value of firms’ output is also £100m. The £100m firms receive for their output is then distributed to households in return for the factor services they have provided to make the goods and services.

We can see that in this simplified economy, all household income is passed on to firms as spending, and then back to households again as income. It follows that there is no reason for the level of national income to change; it is in stable equilibrium. The next section of notes looks at a more realistic model of the economy.