The market failure that can result from externalities_,_ the problem of public goods and information gaps can be addressed by various forms of government intervention.Intervention can include the following:

The imposition of an _ad valorem __tax may help to correct the over production of a good where there are negative externalities and where the externality per unit increases with output. This is shown in _Fig 1: 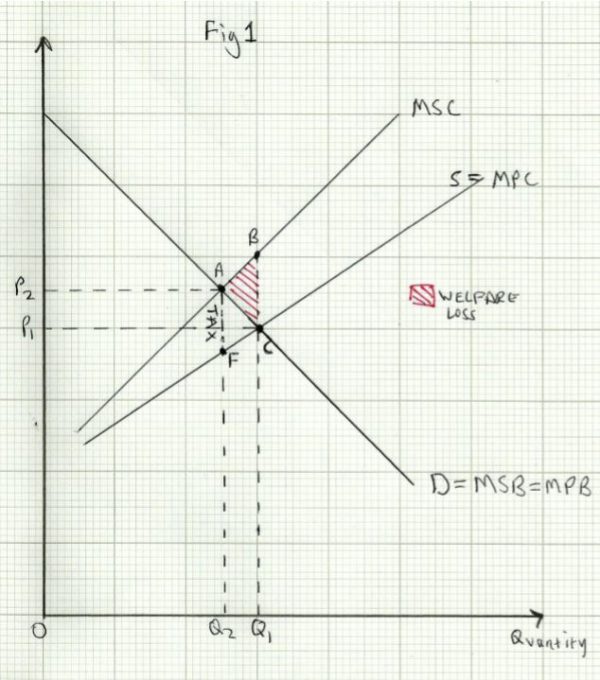 Suppose _Fig 1 _represents the market for electricity generated from coal fired power stations, which generate sulphur emissions which are harmful to human health, pollute lakes and rivers, and damage buildings. At low levels of output, the damage is minimal or non existent, but beyond a certain level it becomes a growing problem and the external costs rise faster than output.

This is shown in the diagram by the diverging__ mpc (supply curve) and __msc. The demand curve is also the__ msb and __mpb.

The free market price and quantity will be respectively P1 and Q1. This creates a welfare loss equal to area ABC.

The socially optimal price and output are respectively P2 __and __Q2. Beyond Q2 __the __msc __of additional units exceeds the __msb. There is over-production of Q1 __to __Q2.

An ad valorem tax of AF __per unit would shift the supply curve upwards, so that it intersected the demand curve at point __A. Demand would then fall to Q2 and price would rise to P2. He __msb __and msc would now be equal.

If, for some reason, there was a decrease in demand, causing the demand curve to shift leftwards, a smaller tax per unit would be needed to correct the market failure, as the gap between msc and msb would be smaller.

If the negative externality per unit is constant, so that the msc and __mpc __curves are parallel, it is appropriate to impose a __specific tax __to correct the market failure. In this case the appropriate tax rate would not change, regardless of the price and market quantity.

There is a number of difficulties with using indirect taxes to correct market failures:

Subsidies can be used to correct the market failure and under-production when there are positive externalities. This is shown in_ Fig 2_ below: 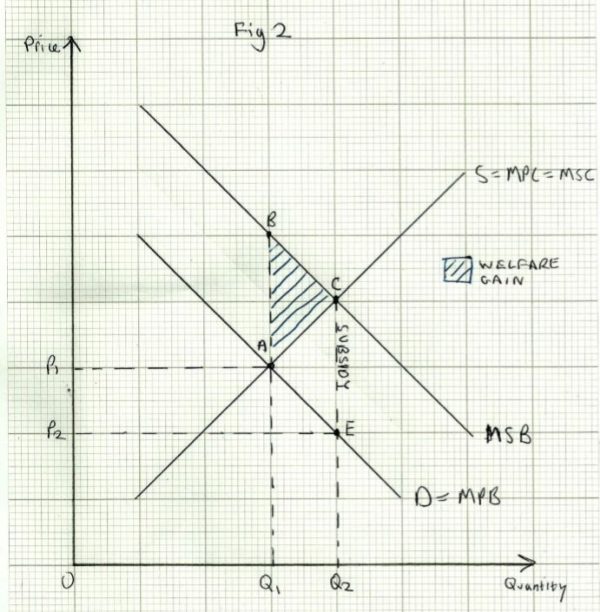 Higher education is a good example. It generates private benefits to students (they will earn more in later life), but also creates an external benefit (higher earners pay more tax and have knowledge and skills that benefit society).

In _Fig 2 _the privately optimal level of higher education (the number of students taking courses) is Q1 and the price they pay (tuition fees) is P1.

There is under-production of Q1 __to __Q2. This can be corrected by a subsidy of CE per unit (per student). This has the effect of pushing the supply curve (msc) downwards by the amount of the subsidy, so that it intersects the demand curve at point E.

Area ABC represents the welfare gain as a result of the subsidy. Between Q1 __and __Q2 __the msb of each additional student receiving higher education is greater than the __msc.

There is a number of difficulties with using subsidies to correct market failures:

Taxes and subsidies are both market based approaches to correcting market failure. An alternative approach is for government to impose regulations which producers are legally required to follow. This is sometimes called the ‘command and control’ approach; the government makes rules and then enforces them. Breaking the rules may result in large fines or imprisonment.

Regulation can be used to address information problems. Schools for instance are forced to publish exam results, OFSTED reports and other data that may help students and parents choose the most appropriate school. Food manufacturers have to print information on the packaging relating to contents and the amount of fat, sugar and salt they contain. There may also be controls to prevent misleading or inaccurate advertisements.

Regulation is widely used to ensure safety and protection of the environment; ‘fly tipping’ is against the law, for instance and motor vehicles must pass an annual M.O.T. test to ensure they are safe and not producing more exhaust emissions than the legal limit.

The attraction of regulation as an approach to dealing with externalities is firstly that it is fairly predictable in its outcome, provided that it is properly enforced and punishment is sufficient to deter would be offenders. The vast majority of motorists, for instance do not take the risk of driving without an M.O.T.

But there is also a number of difficulties with regulation:

We have seen in 1.1.3__ _that services like law and order, defence and street lighting will not be sufficiently provided through the market mechanism. Governments can either provide these services directly (eg the police and armed forces) or pay private contractors to do it (some prisons are run by private firms). In both cases, however, the government has to raise taxes to pay for them. In recent years the government has increasingly favoured contracting out the provision of these services to firms like _SERCO, CAPITA and G4S. The firms are invited to bid in a competitive market for the contracts, which can be awarded to the firm offering the best combination of a low price and high quality.

Whether or not this is better than direct provision by the state is a matter of controversy. Proponents of contracting out argue it leads to greater efficiency, because firm s ave to compete with each other to win contracts.

Opponents argue that the firms do not always keep to their commitments on quality of service, in order to boost their profits. Also they may pay low ages in order to keep their costs down, and profits up.

Like indirect taxes, tradable permits are a market based solution to the problem of externalities. The European Union, for instance operates an emissions trading scheme for CO2. An overall limit is set for CO2 emissions per year by major industries across the EU. Each country is then allocated a share of the permitted level of emissions, based on population and GDP. Member countries then sell permits to polluters, who can either buy a permit for a certain amount of CO2 emissions per year, or eliminate emissions from their production process.

Firms that find it very difficult or expensive to reduce emissions will buy the permits, whilst firms that can cheaply introduce alternative technology will do so instead, avoiding having to buy permits.

The permits are tradable, so firms can sell them on if they subsequently find a cheaper alternative technology.

Over a number of years the overall limit for emissions can be reduced, but in a way that achieves the reduction at the lowest economic cost.

Tradable permits work best when there is a small number of big producers, such as power stations or chemical works. This is because it is necessary to monitor the emissions of the producers, to make sure permit levels have not been exceeded.

Where the number of producers is large, such as in farming, it may be better to use taxes instead. Fertilisers or pesticides, for instance can be taxed to discourage their use, without then having to inspect what thousands of farmers are putting on their crops.

Governments can use both maximum and minimum price controls to correct for certain kinds of market failure.

The government may introduce a maximum price for a good or service which is in short supply, is considered essential, and for which the price is beyond the reach of people on low incomes. In such cases there is under-provision of a vital good and hence a market failure. Many poor countries put a price cap on things like water, electricity and basic foodstuffs. Sometimes there may be positive consumption externalities associated with these goods. Housing is an obvious example; good housing enables people to live healthy and productive lives, benefiting the community as well as the individuals concerned.

The effect of a maximum price regulation is shown in Fig 3 below: 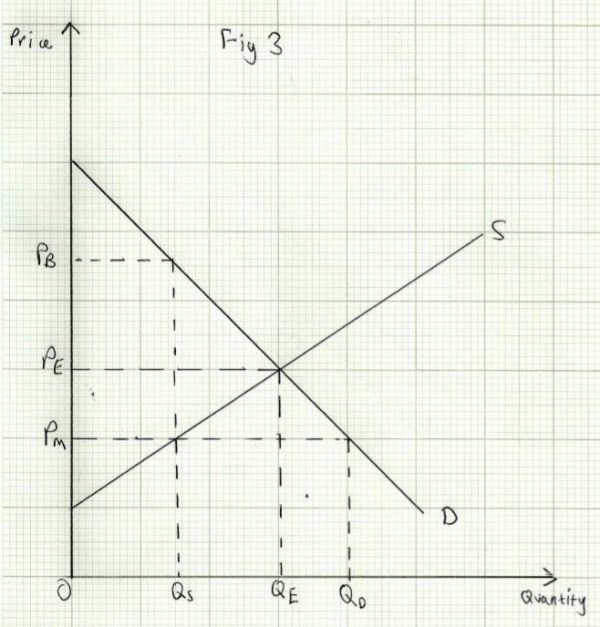 The free market price and quantity are PE __and __QE __respectively. Suppose the government introduces a maximum price of __PM, __which is below the equilibrium This will result in demand extending to __QD __but supply will contract to __QS.

There is therefore excess demand of QD __to __QS. The lower price will benefit those able to obtain the good (for instance those who get up early to queue in shops) but some will go without altogether, and these may be more vulnerable people (the old and sick for instance).

It is therefore likely that the government will have to introduce some kind of physical rationing of the scarce supplies, to ensure that everybody gets some. This is what happened during World War Two.

It is also likely that a maximum price below the equilibrium will lead to illegal selling on the ‘black market’, as producers realise they can sell goods at a much higher price. In Fig 3 the black market price will be PB. This is the price at which demand is equal to QS.

A maximum price above market equilibrium has no effect on market price or quantity, but in some circumstances may be introduced to prevent ‘panic buying’ if there is widespread fear of forthcoming shortages and price rises.

These may be introduced where the good in question creates significant negative consumption externalities. The Scottish government has just introduced a minimum price for alcoholic drinks of £0.50 per unit of alcohol that the drink contains. This has lead to significant increases in the prices of many drinks, especially cheap, super strength beers and ciders.

The impact of a minimum price is shown in _Fig 4 _below: 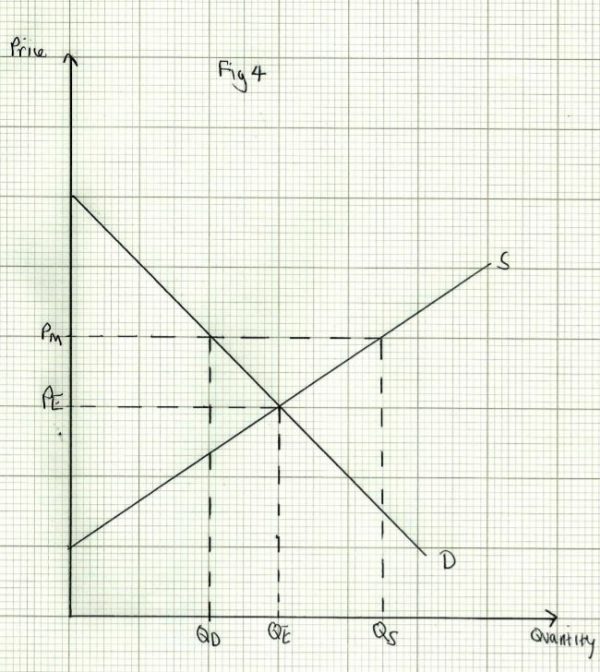 The free market price and quantity are PE and QE respectively. The introduction of a minimum price above the equilibrium, such as PM will result in a contraction of demand to QD, and an extension of supply to QS.

Provided that the minimum price is properly enforced, it will lead to lower consumption and therefore to a lower negative externality. But there will be attempts by some sellers to sell below the legal minimum, rather than have unsold stock.

A minimum price below equilibrium has no effect on market price or quantity.