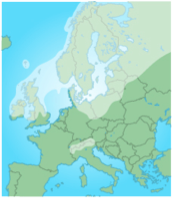 18,000 years ago ice covered about 30 per cent of the land in the world. In Britain, ice covered land as far as the Bristol Channel. It was up to 3km thick.

During the last ice age the temperature remained below 0°C which allowed the ice to remain on the land all year.

This map shows that during the last ice age sea level was at least 120 m lower than it is today, exposing much more area on the continents. 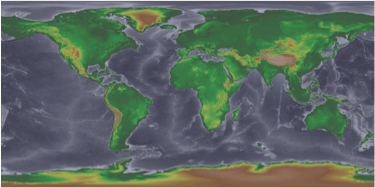 Isostatic changes – These changes are more local in scale. When the weight of

A storm surge is a change in sea level caused by intense low-level pressure systems from depressions and hurricanes.

For every drop in pressure by 10mb the sea rises by 10cm. During a tropical Storm the pressure may be 100mb lower than normal, which will raise the sea level by 1 metre. This rise in sea level is intensified when the coastline is funnel-shaped.

Some of Bangladesh’s estuarine islands have sunk by as much as 1.5m in the last 50 years. Isostatic readjustment is partly responsible, but the main reason is the clearance and drainage of more than 50 large islands in the Ganges-Brahamputra river delta.

These islands used to be forested, but now have been cleared and are being used to grow rice to feed the country’s large population.

around these islands to protect them against tidal and storm surges. Over the last 50 years, Bangladesh has built 4000km of embankments along the coast. About 30 million people live on polders (land enclosed by the embankments). In 2014, Bangladesh was planning to spend $400mn form the World Bank to upgrade the embankments.

These actions by humans have also prevented the natural deposition of sediment that used to maintain the island’s height. Now these islands are fast submerging and millions of people living on them are at increased risk of flooding if the embankments give way.

On the 5 December 2013 a large storm surge hit the east coast of the UK causing widespread flooding along the coast. This was an example of low pressure, high winds and high tidal conditions combining. The storms were driven by powerful jet streams bringing depressions (968mb) across the Atlantic. The storms are funnelled into the North Sea, which gets shallower towards the south coast of the UK.

Rising sea levels and the possibility of more frequent and intense storms can all lead to an increased food risk. There are two approaches that can be taken to deal with the risk:

Sections of the coastline are being managed as a whole, rather than by individual villages/towns. This is because human actions in one place will affect other places further along the coast because sediments moves along the coast in sediment cells and littoral cells. Hopefully conflict is also managed with the shared goal of long term coastal protection.

In a report published after the 2004 Indian Ocean tsunami, it compared two coastal villages bit by the wall of water. It showed that two people died in the settlement protected by dense mangrove and scrub forest, while up to 6000 people died in the village that had removed the protective vegetation.

Partly as a result of this, Sri Lanka has become the first nation in the world to protect all of its mangrove forests. Its scheme will protect all 8800 hectares of remaining forest, as well as replanting mangroves that have already been felled (and funding micro-loans for villages in exchange for them protecting local mangrove forests).

Other advantages of conservation of these mangrove forest sis that they store huge amount of carbon in the top layers of the soil (they act like a carbon sink). Another advantage of a healthy mangrove ecosystem is that the stilted root systems serve as nurseries for many of the fish species that go on to populate coral reefs.

It is not clear if climate change will create more hurricanes (cyclones), but warmer ocean surface temperatures and higher sea levels are expected to make them more intense (2-11% stronger) and with more rain (projected to increase by about 20%). Records show that year-on-year there is an increase in the number of storms that form.

Countries with low lying coasts already suffer from coastal flooding, but climate chance is likely to increase the risk. The IPCC (Inter-Governmental Panel on Climate Change) has predicted that by 2010, hundreds of millions of people will have abandoned coastal zones worldwide.

As sea levels continue to rise, storm surges will also become higher. This has already been seen, such as in 2012 when hurricane Sandy flooded the East coast of the USA, causing $65 billion worth of damage (including in New York!)