Lateral shift is the net effect of movement up and down the beach. Longshore drift is this process, the movement of sediment along the coast.

The above clip shows longshore drift on the Holderness coast (you will learn more about this place later on).

The prevailing wind along the Holderness Coast is north-easterly. The result is waves break on to the beach obliquely at an angle of around 45 degrees. The swash moves beach material along the beach and the backwash, under gravity, pulls the material back down the beach at right angles to the coastline. Over time this creates a net shift of material along the coast.

Where the removal of beach material exceeds the supply erosion occurs. This is illustrated in the photograph below where a large rock groyne at Mappleton stops the supply of new beach material. As the result longshore drift transports material from the beach to the south of the groyne and is not replenished (as the groyne blocks it). This leads to a lack of beach material and therefore protection for the soft, boulder clay cliffs.

Tides – changes in the water level caused by the gravitational pull of the moon (and the sun to a lesser extent). In the UK, we have two high and low tides a day.

The difference in height between high and low tides is called the tidal range.

A high tidal range will lead to strong tidal currents as the tides rise and fall. These are particularly strong near estuaries (when rivers meet sea) and are key in transporting sediment. They are also very dangerous for people! 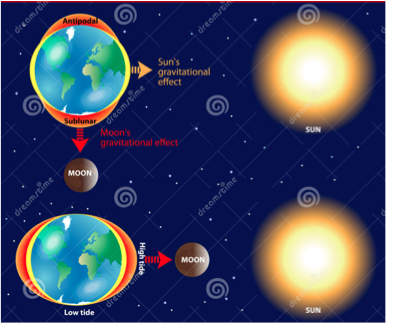 It follows the four processes. These depend on the size of sediment:

Solution – Minerals dissolve in the water.

Traction -This is when rocks and boulders are rolled along the riverbed by the force of the water.

Sediment moves along the coast in sediment cells. These act as systems which inputs (sources), processes (transfers or flows) and outputs (sinks).

Sediment budget is the amount of sediment available within a cell.

If sediment budget falls, waves will continue to transport sediment (erosion may occur). One change has led to another called positive feedback.

If sediment budget increases, negative feedback occurs, the sea can not carry so much and thus deposits.

The term beach refers to the accumulation of material deposited between high and low tidal limits, which shelves downwards towards the sea. A typical beach has three zones

A whole variety of materials can be moved along the coast by waves, fed by longshore drift. The coarse material is found deposited in the backshore and foreshore zones as littoral deposits. The finer material, worn down largely by attrition is usually found in the offshore zone as neritic deposits.

The backshore is a cliff or is marked by a line of sand dunes.

Above and at HWM (high water mark) there may be a shingle/storm ridge. This is an area of coarse material pushed up the beach by spring tides, aided by storm waves which fling material well above the level of normal tidal waves. This coarse material then usually cannot be reached and remains largely untouched. 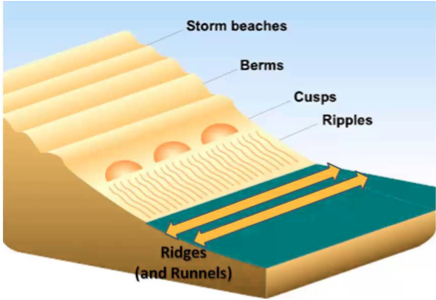 There are often a series of smaller ridges formed beneath the storm ridge known as berms. These are build ups of finer material that mark the successive high tides that follow the spring tide through to the neap tide.

The seaward edge of the berm is often scalloped and irregular due to the creation of beach cusps. Cusps are semi-circular depressions; they are smaller and more temporary features formed by a collection of waves reaching the same point. The sides of the cusp channel the incoming swash into the centre of the depression and this produces a stronger backwash which drags material down the beach from the Centre of the cusp. The spacing of cusps is related to wave height and swash strength.

The foreshore is exposed at low tide.

Ridges and runnels form parallel to the shore line in the foreshore zone. Ridges are areas of the foreshore that are raised above the adjacent shore which dips into a Runnel. Ridge and runnel systems are formed due to the interaction of tides, currents, sediments and the beach topography. They only form on beaches with a shallow gradient. They form as a simple drainage route for tides. Water flows in and out via the runnel.

Offshore, the first material is deposited. In this zone, the waves touch the seabed and so the material is usually disturbed, sometimes being pushed up as offshore bars, when the offshore gradient is very shallow.

__Beach form is affected by the size, shape and composition of materials, the tidal range and wave characteristics. __

As storm waves are more frequent in winter and swell waves more important in summer, many beaches differ in their winter and summer profile. Thus the same beach may produce two very different profiles at different times of the year.

Sediment size affects the beach profile through its percolation rate. Shingle/pebbles allow rapid infiltration and percolation, so the impact of swash and backwash are reduced. As the backwash is reduced it will not impeded the next swash. If the swash is stronger than the backwash then deposition may occur. By contrast, sand produces a lower angle and allows less percolation. Backwash is likely to be greater than on a gravel beach.

The pattern is made more complex because sediment size varies up a beach. The largest particles, the products of cliff recession, are found at the rear of a beach. Large, rounded material on the upper beach is probably supplied only during the highest spring times and is unaffected by ‘average’ conditions. On the lower beach wave action is more frequent, attrition is common and consequently particle size is smaller.

There are two types of coastlines

Swash Aligned Coasts: are produced where the waves break in line (parallel) with the coast. Swash and backwash movements move material up and down the beach producing many coastal features. Swash aligned beaches are smoothly curved, concave beaches.

Drift aligned coasts: beaches are produced where waves break at an angle to the coast. The swash therefore occurs at an angle but the backwash runs perpendicular to the beach. As a result, material is transported along the beach via longshore drift. 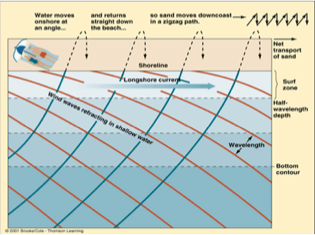 A spit is a stretch of sand or shingle extending from the mainland out to sea. They develop where there is a sudden change in the shape of the coastline such as at a headland. Normally, longshore drift transports beach sediment along a coastline. When the shape of the coastline changes substantially however, longshore drift continues to transport material in the same direction rather than following the coastline. This transports the material out to sea. As the strength of the drift weakens away from the coastline, the sediment is deposited. Deposition can be brought about earlier near estuaries. The flow of water into the sea at an estuary is stronger than the drift, forcing the sediment to be deposited.

The deposition of sediment forms a spit but its shape changes as a result of wave refraction. Refraction around the end of a spit curves it into a “hook” forming a recurved spit. As the area behind a spit is sheltered from waves and the wind, it provides the perfect environment for salt marshes to develop.

Spits are eroded by the sea and wind but a constant supply of sediment from longshore drift ensures their continued existence. Events such as storms change the shape of a spit drastically over short periods of time though. During a storm event, erosion exceeds deposition so a lot of material is removed from the spit, changing its shape. 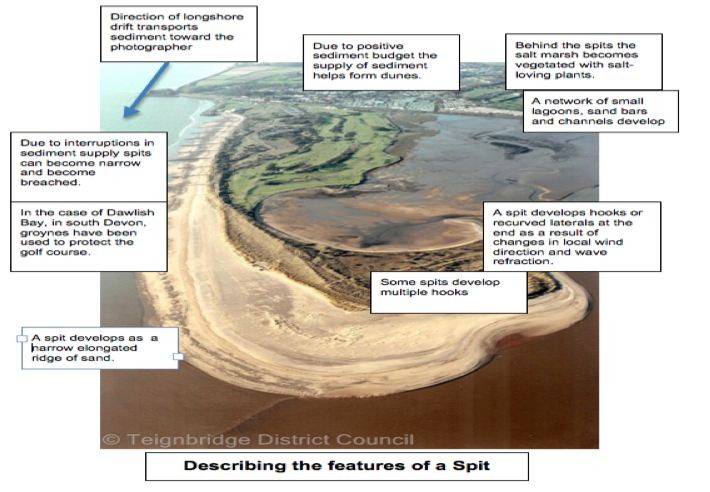 A bar is a ridge of material that is connected at both ends to the mainland. It is located above sea-level. If a spit continues to grow lengthwise, it may ultimately link two headlands to form a bay bar. These are composed either of shingle, as in the case of the Low Bar in Cornwall, or of sand, such as the nebrung of the Baltic coast.

Barrier islands are natural sandy breakwaters that form parallel to a flat coastline. By far the world’s longest series is that of roughly 300 islands along the East and Southern coasts of the USA. The islands are generally 200-400 m wide, but some are wider. Barrier islands form only under certain conditions and America’s eastern seaboard provides the ideal conditions for barrier islands…

Over the last 15000 years, the sea level has risen by 120m as glaciers and ice caps have melted.

Wind and waves have formed sand dunes and beach ridges at the edge of the continental shelf.

As the sea levels rose, the water broke through the ridges and dunes, flooding the low area behind it forming a lagoon.

This resulted in the former dune area becoming an island.

Constant action by waves and continuing rise in sea levels caused islands to migrate landward as sand was removed from the beach and deposited inland. 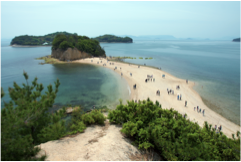 If a ridge of material links an island with the mainland, this ridge is called a tombolo. An example of this is Chesil Beach on the south coast of England.

Cuspate forelands consist of shingle ridges deposited in a triangular shape, and are the result of two separate spits joining, or the combined effects of two distinct sets of regular storm waves.