When out in open water there is little horizontal movement of ocean water, the bulk of the motion is up and down or vertical. However, this changes slightly when waves approach the coastline. As the water approaches the coastline it encounters increasing contact with the shelving sea bed, which exerts a frictional force on the base of the wave. This changes the normal circular orbit of the wave into an elliptical orbit. As the waves gets closer and closer to the coast the impact of friction grows, with the top of the wave moving faster than the base of the wave. Eventually a critical point is reached where the top of the wave (the CREST) curves over and creates a breaking wave. This breaking wave can be further disrupted by water returning down the coastline back out to sea.

Constructive waves have a short amplitude and a long wavelength.

They have a low frequency of around 6-8 waves per minute, particularly when these waves advance over a gently shelving sea floor (formed of fine material: sand). These waves have been generated far offshore creating a gradual increase in friction and thus a gradual steepening of the wave front. This creates a spilling breaker, where water movement is elliptical. As this breaker collapses, the swash surges up the gentle gradient with maximum energy.

Constructive waves produce a strong swash, but a weak backwash, which produces a gentle beach as material is deposited but not removed from the beach. The supply of new material and the constant action of pushing the material up the beach eventually produces berms. 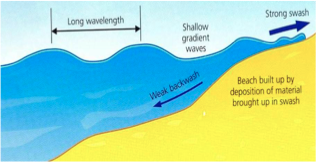 Destructive waves are the result of locally generated winds

They have a high amplitude and a short wavelength.

They also have a high frequency of 10-14 waves per minute, resulting in a steeply shelving coastline, where rapid friction and steep circular plunging breakers are formed.

The waves have a strong backwash but a weak swash, so they remove a lot of material from the beach producing a steeper beach profile.

It is very rare for waves to approach a regular uniform coastline, as most have a variety of bays, beaches and headlands. Because of these features, the depth of water around a coast varies and as a wave approaches a coast its progress is modified due to friction from the seabed, halting the motion of waves.

As waves approach a coast, due to the uneven coastline, they are refracted so that their energy is concentrated around headlands but reduced around bays. Waves then tend to approach coastline parallel to it, and their energy decreases as water depth decreases.

However, due to the complexities of coastline shapes, refraction is not always fully achieved resulting in long shore drift (which is a major force for transporting material along the coast).