Both rock type and structure can have a significant impact on coastal landforms.

Weaker rocks (e.g. clays and sands) have less structural, strength and are eroded easily, producing a lower cliff profile with mudslides and slumping.

The coast is the narrow zone between the land and the sea.

It is worth remembering that the landscape will be influenced by processes on the land as well as the sea.

Sub-aerial processes include weathering and mass movement. These processes operate on the cliff face to weaken it and provide material for coastal erosion.

1 Vegetation can protect the cliff face but its roots can also grow into cracks and widen them. This is a type of Biological Weathering.

2 Rocks such as clay become saturated with water. The rock is weakened and mudflows occur . this is a type of mass movement.

3 Exposed rock faces can be broken up by ice, or heat and cold. For example, repeated freezing and thawing of water in rock cracks weakens the rock. This is physical weathering.

4 Rock falls are a very sudden type of mass movement. The sea can use these boulders to erode the cliff further.

5 Salt crystals can penetrate the exposed rock face. Where there are rocks containing iron oxidation can occur, causing it to ‘rust’. This is chemical weathering. 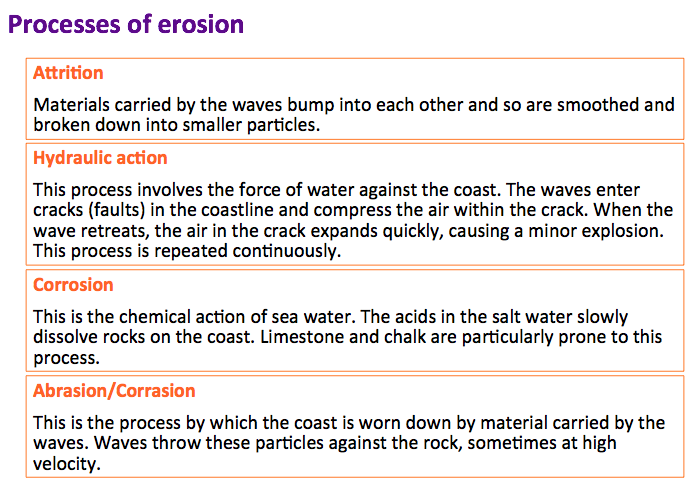 The sea cliff is the main landform along coasts where marine erosion is dominant. The basic formation of a sea cliff is the same everywhere. Waves attack the base of the newly exposed rock faces. By hydraulic action and abrasion, and the other processes of coast erosion, the base of the cliff is undercut to form a wave-cut notch. The rock face above the effects of wave action begins to overhang. As waves continue their relentless attack upon the base of the cliff, the size of the overhang increases until the weight of the rock above can no longer be supported and a section of the cliff collapses. Active marine erosion begins again at the base of the cliff after the waves have removed the loose rock, leading to further collapses and gradual retreat inland of the position of the cliff. Therefore every cliff coastline is a sign that land is being lost. As a consequence of cliff retreat another landform. The wave-cut platform, is formed.

Headlands and bays, such as Swanage Bay, form on discordant coastlines, where hard and soft rock run in layers at 90˚ to the water. Alternating layers of hard and soft rock allow the sea to erode the soft rock faster, forming a bay but leaving hard rock sticking out, known as a headland. The altering rate of erosion of hard and soft rock is known as differential erosion. As the bay develops, wave refraction around the headlands begins to occur, increasing erosion of the headlands but reducing the erosion and development of the bay due to a loss of wave energy. Headlands and bays can form on concordant coastlines too, as has happened with Lulworth Cove, but this requires the rock to have already been weakened, possibly during an ice age. Irrespective of whether the coastline is concordant or discordant, as wave refraction takes place around the headlands and erosion of the bay is reduced, sub-aerial weathering such as corrosion and corrasion begins to weather the bay, furthering its development.

A cliff is a vertical, near vertical or sloping wall of rock or sediment that borders the sea. They generally differ in their angle of slope because of their rock structure and geology, but the processes involved in their formation are the same.

They result from the interaction of a number of processes:

Rocks tend to form in layers of different rock types known as beds. These beds are subjected to tectonic forces that tilt and deform them so they dip at an angle. The angle the beds dip at affects how they are eroded and the profile of the resulting cliffs. As well as this rock structure plays an important role in variation between cliff profiles:

Many cliffs are composed of more than one rock type - these are known as COMPOSITE CLIFFS. The exact shape and form of the cliff will depend on such factors as strength and structure of rock, relative hardness and nature of waves involved:

Cliffs that are composed of strong, hard rocks such as granite will be eroded slowly with little cliff retreat.

Depending on the relative position of the weaker rock in composite cliffs determines the different landforms that are created. For example:

If less resistant, weak rock is at the base of the cliff, undercutting and collapse may occur.

If the less resistant rock is near the top of the cliff, it may be subjected to sub-aerial processes.

Coastal cliffs in high latitudes are also characterized by relatively low gradients since the per glacial processes produce large amounts of cliff base materials.

Temperate regions tend to have the steepest cliffs. The rapid removal of debris by high energy waves prevents the build up of material at the base,.